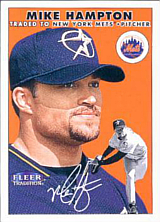 Mike Hampton won 148 games in 16 seasons in the majors. He was a two-time All-Star and widely regarded as one of the best hitting pitchers of his era.

Selected by the Seattle Mariners in the sixth round of the 1990 amateur draft, Hampton reached the majors with the team in 1993, going 1-3 in 13 games and giving up 18 earned runs over 17 innings. He made 3 starts, going 0-3 with a 16.71 ERA, while faring better out of the bullpen, where he went 1-0 with a 4.50 ERA and 1 save. Following the season, he was traded to the Houston Astros, along with Mike Felder, for Eric Anthony.

After pitching exclusively in relief in 1994, Hampton joined the Astros rotation in 1995 and stayed in that role for five years. He put together his best season in 1999, going 22-4 with a 2.90 ERA and 177 strikeouts and leading the National League in wins, finishing second to Randy Johnson in Cy Young Award voting. During that season, he had a streak of 17 straight starts in which he pitched 7 or more innings, a streak that was not matched again until Clayton Kershaw did so in 2014. After the season, he was dealt to the New York Mets, for whom he won 15 games in 2000. That fall, he did not allow a run in two starts in the NLCS, and he was named series MVP. He lost the only Fall Classic start of his career, 6-5 to the New York Yankees in Game 2 of the 2000 World Series on October 22nd.

Following the 2000 campaign, Hampton became a free agent and signed a 8-year, $121 million contract with the Colorado Rockies. He explained that his decision was not based on money, but on the quality of schools in Colorado, a statement that drew a lot of skepticism. He won 14 games in his first season with the Rockies and was selected to play in the All-Star Game, but, pitching his home games in Coors Field, his earned run average ballooned to 5.41. He thrived as a hitter in his new home, hitting 7 home runs in only 79 at-bats in 2001, an NL record for a pitcher. The next summer, 2002, he lost 15 games and posted a 6.15 ERA but hit .344.

After two years in Colorado, Hampton was traded to the Florida Marlins, who in turn sent him to the Atlanta Braves in a complicated series of deals that raised a lot of eyebrows because the Marlins' role was akin to a form of money laundering, while the Rockies agreed to pay a large chunk of the money owed on the last six years of his contract. In his first season for the Braves, 2003, he went 14-8 and brought his ERA down to a more respectable 3.84. He remained a mainstay in the Atlanta rotation until suffering an elbow injury late in the 2005 campaign. Following Tommy John Surgery, he missed both the 2006 and 2007 seasons. While attempting a comeback, he was injured four more times. He pitched one inning in the Mexican Pacific League in the winter of 2007-2008 before slipping on the mound and straining his hamstring, sidelining him the rest of the winter. In his second spring training appearance in 2008, he strained his right groin, but was still able to make the roster out of spring training. Before his April 3rd start, which would have been his first major league game in three years, he strained his left pectoral muscle and was placed on the disabled list. In July, he was on a rehab stint with the Mississippi Braves when he hurt his left groin. Later that month, he finally completed his comeback and returned to the bigs. Overall, in 13 starts for Atlanta that summer, he was 3-4 with a 4.85 ERA.

Hampton became a free agent after the 2008 season and returned to the team with which he had had his greatest success, the Astros. He went 7-10 with a 5.30 ERA in 21 starts for the club in 2009 before he was sidelined by a partially torn rotator cuff. Initially, it was believed he would miss the entire 2010 campaign, but in August, he signed with the Arizona Diamondbacks and made 4 appearances for the Reno Aces. He joined the big league team in September, making 10 relief appearances and not allowing a run in 4 1/3 innings of work. He tried to make the team out of spring training in 2011 but announced his retirement on March 26th, after allowing 18 hits and 8 walks in 9 2/3 innings in the Cactus League.

Hampton returned to the game in 2013 as pitching coach of the AA Arkansas Travelers, also spending time in spring training with the parent Los Angeles Angels of Anaheim. Hampton was a pitching coach for the AZL Angels in 2014. In 2016, he moved to the Seattle Mariners as the bullpen coach under new manager Scott Servais, who had been his teammate his first season with the Astros. He resigned just before the 2017 All-Star Game and was replaced on an interim basis by Nasusel Cabrera.