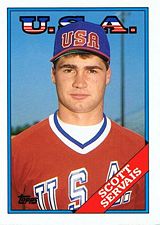 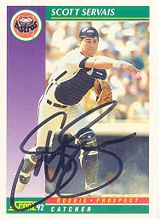 Scott Servais was a member of Team USA for three years. He hit .314 in 1986 and was with the US for the 1986 Amateur World Series. He was the only member of the team in both the 1987 Pan American Games and 1987 Intercontinental Cup; overall, he hit .380/~.405/.577 that summer, trailing only Mike Fiore in average and better than Tino Martinez or Frank Thomas. In the Intercontinental Cup, he hit .250/~.289/.417 for the Silver Medal winners, with 9 RBI in nine games; on the other hand, tourney All-Star catcher Orestes Kindelan hit 9 home runs in the same period. He backed up Doug Robbins at catcher in the 1988 Baseball World Cup, hitting .300/.333/.350 with 6 runs in six games. He was signed as a 3rd round pick in the 1988 amateur draft by the Houston Astros and scout David Lakey.

In 2008, Servais was the Director of Player Development for the Texas Rangers. By 2011, the title was "Senior Director, Player Development" and after that season he was hired by the Los Angeles Angels of Anaheim as assistant General Manager, working for Jerry Dipoto. Dipoto resigned during the 2015 season and was soon named GM of the Seattle Mariners. On October 23rd, he hired Servais to be the Mariners' manager in 2016, succeeding Lloyd McClendon. It was Servais' first managerial assignment at any level.

He is the major league player with the most at-bats out of Creighton University as of 2006. His uncle, Ed Servais, has been the head coach at Creighton since 2004. Another uncle, Mark Servais, has been a scout with the Chicago White Sox, Houston Astros, and Chicago Cubs [1]

He is not to be confused with his contemporary, pitcher Scott Service. The two last names are pronounced almost identically. 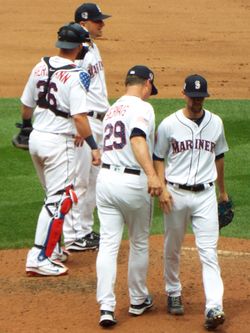