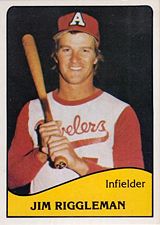 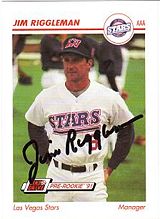 Jim Riggleman was selected by the Los Angeles Dodgers in the 4th round of the 1974 amateur draft. He played in the Dodgers organization from 1974 to 1976 and the St. Louis Cardinals farm system from 1976 to 1981.

After his playing career ended, Riggleman managed in the minors for several years. He was the Cardinals first base coach in 1989 and 1990. He became manager of the San Diego Padres in the last days of the 1992 season and led the team through 1994. In 1995, he took over as skipper of the Chicago Cubs, and he remained with them until 1999. In 1998, he took the team to the postseason for the first time since 1989, after winning a one-game playoff with the San Francisco Giants; the team was swept by the Atlanta Braves in the NLDS however. He was the Cleveland Indians third base coach in 2000 and the Los Angeles Dodgers bench coach for the next four seasons (2001-2004). During this time, his son Jon Riggleman was drafted but never played pro ball.

After serving as a minor league instructor for the Cardinals for a few years, he was named bench coach of the Seattle Mariners in 2008 and succeeded John McLaren as manager when he was fired after a terrible start on June 19th. In 2009 Riggleman was the bench coach of the Washington Nationals then became a mid-season replacement for the second straight year, taking over for Manny Acta as manager at the All-Star break with the team owning the worst record in the majors. Riggleman had grown up in the Washington, DC area and was a fan of the Washington Senators as a kid, giving him a connection to the city. He was retained as full-time manager in 2010. In 2011, he had the team playing its best ball since moving to Washington in 2005 when he quit suddenly on June 23rd; the Nats had won 11 of their last 12 games to move to one game above .500 when Riggleman made his stunning announcement. He had been prompted by a dispute with General manager Mike Rizzo, who refused to discuss extending his contract into the 2012 season. Rizzo said he deeply regretted the decision and added "I was always taught that one of the cardinal rules of baseball was that no individual can put his interests before those of the team." In an ironic twist, bench coach McLaren then took over as interim manager. His resignation cost him a trip to the 2011 All-Star Game, as he had already been named a coach for the National League team by manager Bruce Bochy; he was replaced by Mike Quade of the Chicago Cubs. He left the Nationals' organization after his resignation and signed on as a special assignment scout with the San Francisco Giants. He was in line for more criticism the following year, when the Nats emerged as one the strongest team of the major leagues. OF Jayson Werth took a shot at his leadership, saying that thing were "night and day" under new skipper Davey Johnson and that Riggleman had become too concerned about having his hitters hit to the opposite field, instead of letting them rip away and let their natural talent express itself.

In 2012, he returned to managing in the Cincinnati Reds organization, becoming the first skipper of the Pensacola Blue Wahoos of the Southern League. He moved to the AAA Louisville Bats in 2013, managing the club for two seasons. In 2015, he moved up to the parent Reds as third base coach and in 2016 moved over to bench coach. he remained in the position until the 2018 season. When manager Bryan Price was fired on April 18th after yet another loss brought the team's record to 3-15, he was named manager on an interim basis, until a proper search for a new manager could be conducted after the season. The Reds quickly improved following his coming on board, being just one game under .500 in his first 59 games, prompting calls that he be considered for the permanent position, even if this was clearly not the plan when Price was fired. Observers noted that he had been able to keep players focused even though the team was buried in the standings, when they could easily have packed it in under indifferent leadership. However, when the season ended, the Reds confirmed that they were still looking for a permanent manager and on October 21st announced that they had hired David Bell as their new skipper. It was confirmed shortly afterwards that Riggleman would not be returning to his old coaching position either. Instead he joined the New York Mets as bench coach for manager Mickey Callaway in 2019.