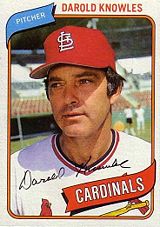 Darold Knowles pitched sixteen seasons in the majors. He is best known as a member of the Oakland Athletics bullpen in the early 1970s and was the first player ever to pitch in all seven games in one World Series.

Knowles played for the Lowry City Bulldogs before going to the University of Missouri. After stints in the majors with the Baltimore Orioles and Philadelphia Phillies, he was traded to the Washington Senators in 1967 and had 27 saves in 1970 despite a won-lost record of 2-14.

Acquired by the A's during the 1971 season, Knowles became a set-up man for Rollie Fingers. Knowles went 5-1 with a 1.36 ERA and 11 saves in 1972 as the club reached the World Series, but he missed playing in it due to a broken thumb suffered on September 27th. The next season, he appeared in all seven games of the 1973 World Series against the New York Mets (the only World Series games of his career). He was the only pitcher to have been used in all seven games of a World Series until Brandon Morrow duplicated the feat in the [2017 World Series]]. He was still a member of the A's in 1974, but his record that year was only 3-3 with a 4.22 ERA in 45 games, and manager Alvin Dark did not call on him in the World Series against the Los Angeles Dodgers.

Following his playing days, Knowles was a coach for the Cardinals in 1983 and a member of the Philadelphia Phillies staff in 1989 and 1990.