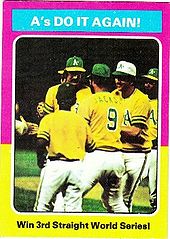 The 1974 World Series matched the two-time defending champion Oakland Athletics against the Los Angeles Dodgers with the A's winning the Series in 5 games.

The Los Angeles Dodgers had won the National League West division by 4 games over the Cincinnati Reds, then defeated the Pittsburgh Pirates, three games to one, in the National League Championship Series. The Oakland Athletics had won the American League West division by five games over the Texas Rangers, then defeated the Baltimore Orioles, three games to one, in the American League Championship Series.

The Oakland A's, dynasty or no dynasty, had become something of a running joke in the American League, consistently matching their on-field heroics with locker-room meltdowns and intra-squad theatrics. After yet another banner year during which Catfish Hunter won 25 games, Reggie Jackson knocked in 105 runs, and Billy North stole 54 bases, the team seemed to be winning more attention for its dysfunctional communication patterns than for its superior lineup. Hunter was threatening to file for free agency in 1975 if owner Charles O. Finley didn't come through with back pay Hunter claimed he had coming. Traumatized former second baseman Mike Andrews was pondering legal action for the shabby treatment he had received in the previous year's World Series. Teammates Rollie Fingers and Blue Moon Odom had gotten into a fistfight. And the Series-winning manager of the previous year, Dick Williams was long gone, having had one personality clash too many with the A's front office. Despite all the melodrama, or perhaps because of it, the Athletics won the AL pennant for the third straight year, dispatching the Orioles in a four-game ALCS.

The Los Angeles Dodgers, for their part, looked downright corporate (despite the later scandals involving Steve Garvey), and seemed, to many, to be the better team. On paper, at least, they were. L.A. won 102 games, boasted the best team ERA in the National League, and led the league in runs scored. Garvey hit .312, Jimmy Wynn knocked in 108 runs, Bill Buckner hit .314 and had one of the best years of his career, Davey Lopes swiped 59 bases, Andy Messersmith won 20 games, and Don Sutton won 19. It was all very brisk and efficient - with the unflappable, perennially studious Walt Alston, in his twenty-first year as skipper of the club, holding everything together. Unlike the Oakland squad, nobody in the Dodger clubhouse appeared to need therapy to work out any simmering interpersonal issues, though Garvey's problems would surface later. The Series promised, at the very least, to be a memorable conflict of worldviews, or so the media could spin it.

In the event, the Dodgers came up short and the Athletics won the Series in five games. Fingers figured in all four Oakland victories, posting a win and three saves, and copped the Series MVP award. Oakland became the first team to win three consecutive Series since the New York Yankees had won five in a row between 1949 and 1953; the win secured the A's status as one of the truly dominant teams of the 1970s. (The other "team of the decade," the Cincinnati Reds, would check in with consecutive Series victories in 1975 and 1976.)

The 1974 Fall Classic was the first all-California World Series. The two franchises would meet again in the Fall Classic 14 years later.

Ken Holtzman's home run was the last homer by a pitcher in the World Series in the 20th Century. Joe Blanton would become the next hurler to do so, in 2008.

This page is in need of some additional content. Please help the Bullpen by expanding it, or learn how to contribute.
Retrieved from "https://www.baseball-reference.com/bpv/index.php?title=1974_World_Series&oldid=922840"
Categories:
Hidden category: