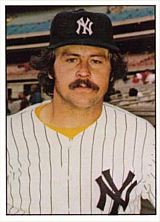 "He's the Robin Roberts of the generation. He's a grinder. He's got a tremendous ERA. He's consistent. He's great to play behind because he gets rid of the ball." - Dick Williams

"Catfish was a very unique guy. If you didn't know he was making that kind of money, you'd never guess it because he was humble, very reserved about being a star-type player... almost a little bit shy. But he told great stories. He had a heck of a sense of humor. When you play with guys like that, you feel blessed." - Lou Piniella 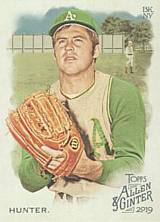 Jim won 21 or more games five years in a row (1971-1975) and tied for the major league lead in wins in 1974 (25) and 1975 (23). Hunter also won the Cy Young Award while leading the major leagues in ERA in 1974. Hunter was an eight-time All-Star who earned five World Series championship rings and threw the first regular season perfect game in the American League in 46 years in 1968. The outing after his perfect game, he was roughed up for 8 runs, the worst outing by a pitcher following a perfecto until journeyman Phil Humber in 2012.

Hunter began his major league career playing for the Kansas City and Oakland Athletics. It was the PR-conscious Athletics' owner Charles O. Finley that gave Hunter the nickname "Catfish" in an effort to pique fan interest (see John Odom and Vida Blue). By 1974, Hunter and Finley had fallen out due to a contract dispute. Hunter voiced his concern that Finley refused to make statutory payments to Hunter's life insurance, thus reneging on his contract. The dispute was eventually referred to arbitrator Peter Seitz, who confirmed the contract breached, thus nullifying the standard reserve clause and making Hunter a free agent. As the first free agent of the modern era, he signed with the New York Yankees for the then-unprecedented sum of $3.75 million over 5 years.

Hunter's teams were very successful; he appeared in 6 out of 7 World Series from 1972-1978, only missing out in 1975. Hunter retired from baseball after the 1979 season at the age of 33. He was elected to the Hall of Fame in 1987. When asked to choose which team to go into the Hall of Fame as, Hunter notably refused to choose between the Athletics and Yankees, loving both franchises equally. His plaque is one of the few with no insignia on the cap. The Athletics retired his number 27 jersey and made him a charter member of the team's Hall of Fame in 2018.

Hunter wrote two cookbooks - Cooking with Catfish Hunter, a diabetic-friendly cookbook, and Catfish Hunter's Southern Cookbook. In 1975, he was the subject of the Bob Dylan song Catfish. He was portrayed by Jason Kosow in the 2007 miniseries The Bronx Is Burning.

Hunter died in Hertford, NC, where he was born, after falling and hitting his head. He had been suffering from amyotrophic lateral sclerosis. He was only 53 years old.

"The sun don't shine on the same dog's ass all the time." - Catfish Hunter

Some or all content from this article is licensed under the GNU Free Documentation License. It uses material from the Wikipedia article "Catfish Hunter".