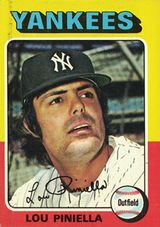 Lou Piniella played 16 seasons in the major leagues before branching out into a successful managerial career spanning from 1986 to 2010.

The naming of Piniella as Rookie of the Year in 1969 came as a shock to some fans who remembered him with the Baltimore Orioles for four games in 1964. It seemed incredible that a player who had appeared in 1964 could still be a rookie five years later! By that point, he had already been signed by the Cleveland Indians in 1962, drafted by the Washington Senators later that year, traded to the Orioles, traded back to the Indians, for whom he played 6 games in 1968, selected by the Seattle Pilots in the 1969 expansion draft and traded to the Kansas City Royals for Steve Whitaker and John Gelnar at the end of spring training.

Batting leadoff on Opening Day, Piniella took the first at bat, made the first base hit, and scored the first run for the Kansas City Royals in their first game on April 8, 1969 against the Minnesota Twins, going 4 for 5 in the opener. Once Piniella became a regular, he found more stability, playing for five years with the Royals and then the rest of his career (11 years) with the New York Yankees.

Piniella was an outfielder, and sometimes DH, who did not draw a lot of walks, did not steal bases, and slugged over .450 only once (in 1977, when he slugged .510 for the Yankees). What he did was hit for average, batting above .300 seven times, and when he missed, he was usually close. He hit .291 lifetime. He was an All Star in 1972 when he was with the Royals. He finished second in the league in batting average that year, six points behind Rod Carew. He also led the league in doubles.

He appeared in four World Series as a player, all with the Yankees. In the 1977 Series, which the Yankees won, he mostly batted seventh. In the 1978 Series, which the Yankees also won, he usually batted fifth. He had played a key role in getting the Yankees to the postseason that year, making a great instinctive play on a line drive single by Jerry Remy with New York holding a 5-4 lead over the Boston Red Sox with one man on in the 9th inning of the one-game playoff to determine the AL East champion on October 2, 1978; having lost sight of the ball hit straight at him, he pretended to be ready to make a catch, freezing the baserunner, Rick Burleson, in his tracks, then stuck out his glove at the last second to snag the bouncing ball, keeping the runners at first and second. When the next two Boston batters, Jim Rice and Carl Yastrzemski, both flied out, the Yankees had won one of the greatest pennant races in history. Earlier in the game, in the 6th inning, he made a great catch off a Fred Lynn line drive to the right field corner with two men on; the Red Sox had a 2-0 lead at that point, and had Piniella not played far out of position, he would never have reached a ball that could have changed the course of baseball history. In the 1981 Series, which the Yankees lost, Piniella hit .438; in a couple of the games, he hit cleanup. 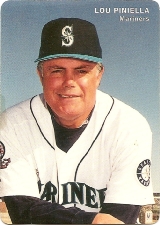 After his playing days, "Sweet Lou" began his career as a manager. He started with the Yankees in 1986 and 1987, the first of two stints at the helm at a time when owner George Steinbrenner would hire and fire managers at the drop of a hat; his second go-round came in 1988. He then spent three years with the Cincinnati Reds from 1990 to 1992. He won the 1990 World Series with the Reds, making him one of only three managers (with George Stallings and Hank Bauer) to have swept a World Series in his only appearance as a manager; the Reds led their division from Opening Day to the final day of the season. He later was manager of the Seattle Mariners for ten years, and was with the Tampa Bay Devil Rays from 2003 to 2005. He was AL Manager of the Year in 1995 and 2001. As a manager, he was over .500 with each team except the Devil Rays. He ranks 16th on the all-time win list for managers.

After sitting out one season, he was appointed manager of the Chicago Cubs for 2007. The team started the season slowly, falling 8½ games behind and being racked by dissension, including a well-publicized fight between starting catcher Michael Barrett and pitcher Carlos Zambrano. Barrett was traded away, even though the Cubs had no obvious replacement for him, but Piniella managed to rally the team, and the Cubs eventually caught up with the St. Louis Cardinals and the Milwaukee Brewers in late August, clinching the NL Central Division title on September 28th. This was the third different franchise that Piniella had led to the postseason. He repeated as NL Central winners in 2008, this time leading the Cubs to the best record in the entire National league. Both years, the Cubs disappointed in the postseason, bowing out in the Division Series. During the 2010 season, he announced he would retire at the end of the year, but after taking some time off to be with his ailing mother, he decided to bring the date forward, resigning after his team's game on August 22nd.

In between managerial stints, he was the New York Yankees' General Manager from October 1987 to May 1988. He was a broadcaster for the team in 1989. He was a consultant with the San Francisco Giants in 2011 and with the Reds beginning in 2016.

In 2017, he was placed on the Veterans Committee ballot for the Hall of Fame, open to players and executives from "Today's Game" era. He was not elected that time, but by getting 7 votes out of 16, the most among candidates not elected that year, he remained a strong candidate for the future. His next chance came when he was again placed on the Veterans Committee's ballot in 2019. He fell just one vote short, being named on 11 of the 16 ballots, with 12 votes needed for election.

Piniella is a cousin of Dave Magadan, who was also a good average hitter with relatively little power. Both Lou (on-screen) and Dave (off-screen), with the Mariners at the time, were featured in the 1994 baseball film Little Big League. He was a childhood friend of Tony LaRussa in Tampa, FL.