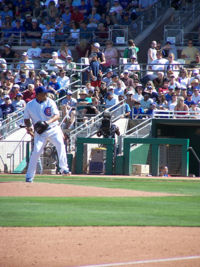 Carlos Zambrano was considered one of the best-hitting pitchers in the Major Leagues. A switch hitter, he hit .300 in 2005, the leading batting average among Chicago Cubs pitchers for that year. Zambrano holds the record for most home runs hit in a season without hitting a double or triple. In 2006, he smacked six dingers but did not hit any other extra base hit.

When he made the All-Star team in 2004, he was the youngest Cubs pitcher ever to do so. Known for his fiery temper, he got into a dugout fight with his catcher, Michael Barrett, on May 19, 2007, that then spilled over into the clubhouse; Barrett was traded away to the San Diego Padres shortly thereafter.

He once suffered an arm injury likened to tennis elbow he attributed to spending too much time on the Internet emailing his brother.

In a game that was shifted from Houston to Milwaukee because of Hurricane Ike, he pitched a no-hitter for the Cubs against the Houston Astros on September 14, 2008 at Miller Park. It was the first modern day no-hitter on a neutral site, and the first by a Cubs pitcher since Milt Pappas had come within a strike of a perfect game on September 2, 1972.

Zambrano had a difficult season in 2010. He began the year in the starting rotation, but poor results had him demoted to the bullpen in May in a controversial move by manager Lou Piniella. After two weeks, he returned to the rotation and pitched a little better, but in a game against the Chicago White Sox on June 25th, he threw a tamper tantrum in the dugout after the Sox scored four runs in the first inning, blaming 1B Derrek Lee for letting a double by Juan Pierre get past him. Piniella removed him from the game for his outburst, and the Cubs immediately suspended him. Three days later, they announced that he would be placed on the restricted list at least until the All-Star break while undergoing treatment for anger issues. One bright note that year was Zambrano's homering for the eighth straight season, the first pitcher to do so since Gary Peters (1963-1971). He finished the year with a very respectable record of 11-6, 3.33 in spite of all the drama.

Zambrano had another eventful season under new manager Mike Quade in 2011 as he publicly called the Cubs a "AAA team" and "embarrassing". On August 12th, he had one of the worst starts of his career, facing the Atlanta Braves; he gave up a career-high five homers, including a pair by Dan Uggla which extended his hitting streak to 32 games. After giving up back-to-back shots to Uggla and Freddie Freeman with two outs in the 5th inning, he threw a pair of brushback pitches at Chipper Jones and was ejected by home plate umpire Tim Timmons. He left the game having given up 8 runs, and while his teammates were continuing to play, he cleared out his locker and walked out of the ballpark, prompting Quade to say he had quit on his teammates. There was speculation that this would be his formal retirement from baseball at age 30. The next day, the Cubs placed him on the disqualified list, suspending his pay and keeping him away from the team for the next 30 days, even if he were to change his mind. They then confirmed that they would resume paying his salary after the 30-day period had expired, but that he would not be expected back that season.

Trying to find his way back to the major leagues, Zambrano went to pitch for the Caribes de Anzoategui in the Venezuelan League over the 2011-12 winter. On November 18th, he took a line drive in the face and required 18 stitches to heal the injury. He returned to the mound on December 14th, not giving up a hit over four innings. He told reporters that he was training hard to earn his way back on to the Cubs roster "climbing mountains, running on the beach and exercising hard so that I can arrive at Spring Training in optimal shape." He also took part in a home run derby organized in Caracas that same week, but did not advance past the first round after belting the first pitch he saw out of the park. On January 5, 2012, the Cubs traded him to the Miami Marlins in return for P Chris Volstad. It was a decision by the new management team in place not to deal with the repeated explosions from the star hurler. For their parts, the Marlins thought that having Zambrano play for his close friend Ozzie Guillen would help to keep him under control. It took a while for Zambrano to record his first win as a Marlin, but he did it with a flourish on May 7th, shutting out the Astros on three hits to demonstrate he was back in old form. However, his overall results as a starter were only so-so, and with the Marlins unexpectedly struggling after making a push for a division title in the off-season, he ceded his spot in the starting rotation to Wade LeBlanc at the end of July. He was 5-9, 4.54 in 20 starts, while LeBlanc had been awesome, sporting a 1.15 ERA out of the bullpen. He hit his 24th career home run that year, tying Bob Gibson for second in the expansion era behind Earl Wilson's 33. He finished the year at 7-10, 4.49 in 35 games, including 20 starts, and was let go by the Marlins after the season.

Unable to find a major league team for 2013, he accepted an offer to play for Venezuela in the 2013 World Baseball Classic, with the hope that a solid performance would open the door to a return to the Show. That did not work out, however, as the Venezuelan team exited the tournament early, and he found himself still without a team. He was Venezuela's top starter in the event, with a 4.91 ERA in his start (a no-decision in a loss to runner-up Puerto Rico), both runs coming on a Mike Aviles single. This was better than Venezuela's other starters Ramon Ramirez and Anibal Sanchez. Finally, on May 15th, the Philadelphia Phillies announced that they were giving him a chance, signing him to a minor league deal and assigning him to the Class A Clearwater Threshers to begin. The Phils had just lost starters Roy Halladay and John Lannan to injuries and were seriously in need of someone with major league experience to step into the breach.

Zambrano did not return to the majors in 2013, though. He had a mediocre winter (1-2, 4.93) for the Navegantes del Magallanes in 2013-2014 then made the US sports media in the postseason, but not in a good way. In Game 3 of the Venezuelan League finals, his Magallanes club was winning a contest 5-1 in the 6th. Robinson Chirinos homered off Mayckol Guaipe and stood a few seconds to watch the blast, then Guaipe plunked Ezequiel Carrera, who was poised to bunt. Zambrano led the charge out of the Navegantes bullpen and swung at anyone in his path; no one was injured in the brawl. He later apologized for his actions, which reinforced the image of a hot-tempered individual.

Zambrano became eligible for the Hall of Fame in 2018, although he did not receive any votes and dropped off the ballot. In April 2019, he announced that he wanted to attempt a comeback, by joining the Chicago Dogs of the independent American Association. This was met with some skepticism, given earlier attempts at a comeback in the Venezuelan League and in Mexico had met with little success. He said that he had been inspired by Bartolo Colon's ability to pitch well into his 40's, and that he had had a encounter with God and that his spiritual advisers had convinced him that his purpose in life was to return to baseball.