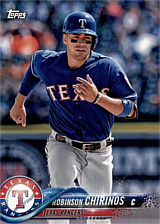 Robinson Chirinos was signed by scout Hector Ortega for the Chicago Cubs in 2000 and began his pro career the following summer with the AZL Cubs. Originally an infielder, he was moved to catcher in 2009. Prior to the 2011 season, he was dealt to the Tampa Bay Rays as part of the trade that brought Matt Garza to Chicago and Chris Archer to Tampa. Robinson reached the majors with the Rays that summer, making his debut on July 18th after another rookie catcher, Jose Lobaton, injured his knee the previous day. He hit .281 in 18 games, then spent all of 2012 in the minors. He was traded to the Texas Rangers just before the start of the 2013 season, returning to the big leagues for 13 games, during which he hit .179.

Robinson was one of the few bright spots in a tough season for the Rangers in 2014. At age 30, he was a major league starter for the first time, winning the job from veterans Geovany Soto and J.P. Arencibia and career backup Chris Gimenez. He played 93 games and while his .239/.290/.415 line was not all-world, he played solid defense and showed unexpected power, with 15 doubles and 13 homers, ending up with a respectable OPS+ of 97. It was a particularly difficult season behind the dish, since the Rangers set a major league record for number of pitchers used; as a result he constantly worked with newcomers, many of them taking their first steps in the big leagues. He confirmed his position as the team's starter during spring training in 2015, with Carlos Corporan now serving as his backup. He started slowly, with only 1 hit in his first 13 at-bats, before he broke through with a career-high 5 RBI against the Los Angeles Angels of Anaheim on April 14th. He hit a double that fell between outfielders Mike Trout and Matt Joyce for two runs, then added a three-run homer as part of an 8-2 win. Battling injuries, he finished with a .232/.325/.438 line and 10 home runs in 73 games, contributing a home run and 3 RBI in the ALDS loss to the Toronto Blue Jays. He only played 57 times in 2016, slashing .224/.314/.483, then had a strong 2017, again in limited action (88 games) by hitting .225/.360/.506 with 17 home runs.

On April 15, 2018, he was the hero of a 3-1 nationally televised Sunday night win over the Houston Astros. He hit a solo homer off Justin Verlander in the 3rd, the only hit allowed by Verlander in 8 innings. Meanwhile, Bartolo Colon carried a perfect game into the 8th inning, until he allowed a run. Chirinos drove in two more runs in the top of the 10th, on a double off Hector Rondon, to account for all three Rangers runs. On June 13th, he was involved in a violent collision at home with Matt Kemp of the Los Angeles Dodgers. He did not appreciate being leveled by Kemp as he scored from second base and threw a punch, igniting a bench-clearing brawl. Both players were suspended for one game for their actions. For the first time in his big league career, he caught more than 100 games, 113 to be precise, while hitting .222/.338/.419 with a career-best 18 home runs and 65 RBI.

The Houston Astros evidently liked what they saw from Robinson, luring him into the fold for 2019. Establishing a new career high in games, 114, he hit .238/.347/.443 while belting 17 home runs, then added 2 more in the World Series as the Astros bowed to the Washington Nationals in 7 games. A free agent again, it was back to the more familiar comforts of the Rangers organization in 2020.