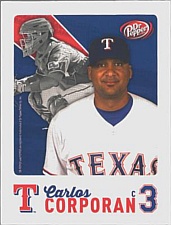 After attending Francisco Oller High School, Corporán was selected by the Anaheim Angels in the 29th round of the 2001 amateur draft but opted to go to Lake City Community College instead. He was later chosen by the Milwaukee Brewers in the 12th round of the 2003 amateur draft and signed. He debuted that summer with the Helena Brewers and also spent time with the AZL Brewers. With the Beloit Snappers in 2004, he hit .228 with a home run in 63 games. The next season, with the West Virginia Power, he hit .239 and put together a 12-game hitting streak from May 20th to June 5th. Corporán began 2006 with the Brevard County Manatees, hitting .270 in 86 games, before being promoted to the AA Huntsville Stars late in the season. Back with the Manatees the next summer, he hit .363 with 3 homers in 23 games before joining Huntsville in early May and hitting .201 in 56 games. He split 2008 between the Stars and the AAA Nashville Sounds and hit .250 with 6 home runs combined. In addition to playing for Brevard County and Nashville the next season, he had a cup of coffee in the majors with the Brewers, appearing in one game. On May 6 against the Cincinnati Reds, he singled off position player Paul Janish, dealing in a blowout, to finish the year a 1.000 hitter.

Corporán became a free agent after the 2009 season and signed with the Arizona Diamondbacks. He spent 2010 with the Reno Aces, hitting .290 with 12 home runs, and was named Pacific Coast League Player of the Week on June 7th. He was 1 for 13 for Puerto Rico in the 2010 Pan American Games Qualifying Tournament. Following the season, he again became a free agent and signed with the Houston Astros organization. He started the season with the Oklahoma City RedHawks, hitting .250 in 22 games, then was called up to Houston in early June. He spent the remainder of the season with the Astros, getting into 52 games. In 154 at-bats, he hit .188/.253/.253 while driving in 11 runs as the Astros finished with the worst record in the major leagues. Carlos got looks in each of the next three seasons, hitting a personal best .269/.310/.449 with four home runs in 27 games in 2012. In January 2015, he was flipped to the Texas Rangers for Akeem Bostick and made his last big league appearances, batting .178/.244/.299 in 33 games before his season (and big league career) came to end via a thumb injury.