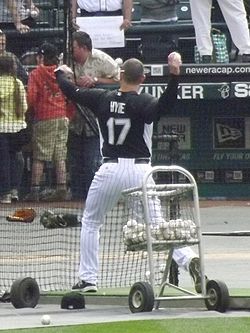 Hyde was the hitting coach of the Greensboro Bats in 2003 and 2004, and was manager of the newly named Greensboro Grasshoppers starting in 2005. In 2007 he managed the Carolina Mudcats, and in 2008 became the manager of the Jupiter Hammerheads. In 2010, he was a minor league instructor in the Florida Marlins organization when manager Fredi Gonzalez and two of his coaches were fired on June 23. Hyde then found himself promoted to bench coach of the Marlins, working with new manager Edwin Rodriguez. Hyde managed the Marlins for one game on June 19, 2011 after Rodriguez resigned unexpectedly before the contest with the Tampa Bay Rays. The Marlins had gone 1-17 over their last 18 games at that point, and lost the only game which Hyde managed, 2-1 to the Rays. The team then brought back 80-year-old Jack McKeon to finish the season at the helm.

Hyde moved to the Chicago Cubs' organization in 2012, being appointed Minor League field coordinator. In 2014, he was appointed bench coach for new manager Rich Renteria, then moved to first base coach after Joe Maddon became the manager in 2015. He returned to the bench coach job in 2018, replacing Dave Martinez who had been appointed manager of the Washington Nationals.

Following the 2018 season, on December 14th, he was named manager of the Baltimore Orioles by new GM Mike Elias, to replace long-time skipper Buck Showalter who had been fired following the worst season in franchise history. He was tasked with guiding the rebuilding of the Orioles starting in 2019. As expected it was a very tough season, with the Orioles' pitchers giving up home runs at a record pace, and the team quickly sinking to the bottom of the league standings after a couple of decent weeks. They were already 10 games below .500 by the end of April and never recovered. On August 7th, in the middle of yet another lopsided loss to the New York Yankees, he nearly came to blows in the dugout with underperforming slugger Chris Davis, the two having to be separated by a couple of other players.