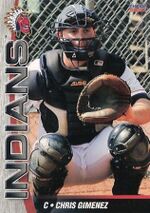 On September 21, 2008 Chris Gimenez and Beau Mills were given the Indians' Minor League On-Base Program "On-Base-Where Careers Take Off" award prior to an Indians game with the Detroit Tigers. Gimenez was given the award in recognition of leading the franchise's minor leaguers in walk percentage (16 percent) and on-base percentage (.421).

After the 2013 season, he was claimed on waivers by the Oakland Athletics, but did not make the team out of spring training in 2014 and was placed on waivers again, being picked up by the Texas Rangers. Assigned once again to AAA, he hit .284 in 39 games for the Round Rock Express. He also spent time in the big leagues with the Rangers, playing 34 games, during which he hit .262. He added another position to his collection (he had also been used as a DH and at third base since his rookie year) when he was used as a pitcher in mop-up duty in a 15-6 loss to the Los Angeles Angels on July 10th, pitching a perfect inning. On August 23rd, he returned to his original organization, the Indians, who acquired him for future considerations after C Yan Gomes was victim of a concussion.

With the Minnesota Twins in 2017, he began to be used semi-regularly as a relief pitcher, notching five appearances by mid-June, all of them in blow-out losses in which the Twins had given up 10 or more runs. Another catcher, Christian Bethancourt, had been hyped as a two-way player with the San Diego Padres in spring training, but had been sent down to the minors after a few unconvincing appearances on the mound in April. Chris actually assumed the role without any fanfare, regularly giving the Twins' bullpen a break with some decent mop-up work, even if there was no plan to use him in more critical situations. On June 15th, it was as a hitter that he made the news, getting the first multi-homer game of his career at age 34 when he connected twice against the Mariners in a 6-2 win. He hit a three-run shot off Angel Miranda in the 1st and a solo shot off him in the 3rd. He hit .220 in 74 games as the Twins made it to the postseason as the second wild card team in the American League. he appeared in the Wild Card Game against the New York Yankees, but did not have a plate appearance.

He played one final season in 2018, split between the Chicago Cubs, for whom he played 12 games, and back with the Twins where he had the final 134 games of his career that September, after having been traded for another veteran backstop, Bobby Wilson, on August 30th. He hit a combined .211, including a solid .276 with a pair of homers for the Twins. That gave him a career BA of .218 in 386 games over 10 seasons, with 24 homers. He also made a couple more pitching appearances, one for each team, but gave up 8 runs in just 2 innings. Altogether, it gave him a total of 11 appearances as a reliever, one of the highest totals ever for a position player. His ERA was 13.09 in 11 innings.

In 2019, he moved straight to the coaching ranks, being hired by the Los Angeles Dodgers as "game planning coach". He stayed only one season.