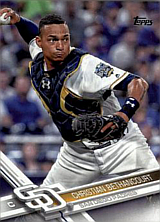 Christian Bethancourt is a once promising catching prospect who later attempted becoming a two-way player.

Bethancourt signed with the Atlanta Braves at age 16 for $600,000; the scout was Luis Ortiz. He debuted that summer with the DSL Braves and hit .267/.328/.371. Coming stateside in 2009, he batted .284/.344/.431 in 32 games for the GCL Braves and .260/.339/.480 in 14 contests for the Danville Braves. He was named the GCL Braves' MVP and the top prospect in the Gulf Coast League by Baseball America as well as the #12 Braves prospect entering 2010. In his first summer in a full-season league, he batted an unimposing .251/.276/.331 for the Rome Braves while throwing out 39% of attempted base stealers. Baseball America listed him the #14 prospect in the South Atlantic League, between Cesar Puello and Robbie Ross. Christian split 2011 between Rome (.303/.323/.430 in 54 games) and the Lynchburg Hillcats (.271/.277/.325 in 45 games). He drew only 11 walks in 99 games, reminiscent of the great Panamanian catcher, Manny Sanguillen. He had huge splits - .314 against lefties, .212 against righties. He then batted .306 with five home runs in 19 games for the Surprise Saguaros of the Arizona Fall League. Baseball America rated him Atlanta's 8th-best prospect entering 2012, 4th among position players after Andrelton Simmons, Edward Salcedo and Tyler Pastornicky. Bethancourt began 2012 with middling offensive numbers for the Mississippi Braves (.250/.277/.276 after 53 games) but was still picked to play for the World team in the 2012 Futures Game. Starting at catcher and hitting 9th, he struck out his first trip up (against Gerrit Cole). He threw out Jonathan Singleton trying to steal in the bottom of the inning, the only runner who tried to swipe against him. He flew out against Dylan Bundy in the 4th. In the 6th, against Jameson Taillon, he lined to Manny Machado, who started a double play. Mexico's Alí Solís replaced him at catcher. He finished the season with a .243/.275/.291 batting line. Baseball America ranked him the #18 prospect in the Southern League, between Daniel Corcino and Carter Capps. In 2013, he returned to Mississippi and hit better (.277/.305/.436), though he made more errors (from 8 to 12) and passed balls (from 5 to 13). In the 2013 Futures Game, he replaced A.J. Jimenez as the World team catcher in the bottom of the 6th. He popped up against C.J. Riefenhauser in his lone at-bat and no one tried to steal against him as the World lost, 4-2.

Bethancourt made his major league debut for the Braves on September 29, 2013, the last day of the regular season. In his lone appearance, he was used as a pinch-hitter for David Carpenter in the 8th inning of a 12-5 win over the Philadelphia Phillies; he struck out against Tyler Cloyd in his only at bat. In 2014, he spent most of the season with the AAA Gwinnett Braves, where he hit .283 with 8 homers and 48 RBI in 91 games. He was called up twice to Atlanta, spending the last days of June and the first half of July with the team, and returning when rosters expanded in September. By then, he was regarded as the Braves' catcher of the future, even though Evan Gattis had a good year with the bat in his first season as the starting backstop. In 31 games in the majors, Christian hit .248 with no homers and 9 RBI, with an OBP and slugging percentage both below .300. Still, the Braves indicated after the season that he would see a lot of playing time in 2015, and when they signed veteran A.J. Pierzynski, they announced he would serve as his back-up. That left Gattis hanging, until media reported that he would be traded to the Houston Astros, clearing the way for the youngster from Panama.

Bethancourt slugged his first major league home run in a key situation on June 6, 2015, taking Vance Worley of the Pittsburgh Pirates deep on the first pitch of the 9th inning for a walk-off homer in a 5-4 win. However, that hit was a rare highlight in what turned out to be a difficult season. He was not able to hang onto his starting job, as he hit only .175 through May 31, and lost playing time to Pierzynski, then was sent down to the minors in mid-June, not coming back until the final week of August. He ended the season with a .200 average in 48 games, 2 homers and 12 RBI. He hit much better with Gwinnett, .327/.359/.480 in 52 games. The Braves gave up on him, trading him on December 10th to the San Diego Padres in return for another top prospect who had failed to establish himself in the big leagues, pitcher Casey Kelly, and Ricardo Rodriguez.

He made a couple of pitching appearances for the Padres in 2016, in addition to playing 73 games and hitting .228 with 6 homers and 25 RBI. His season ended in August because of an oblique strain. He looked impressive enough on the mound that the Padres decided to turn him into a super utility player - one who could not only catch and play the outfield, but who would also come in to pitch on occasion, and not only in blowout losses. The Padres were planning to experiment with Bethancourt in this role in winter ball in Panama. Helping him out was Jason Lane, who had made the transition from the outfield to the mound towards the end of his career and had filled a similar super-utility role in the minor leagues. Early reports out of Panama were very positive, as he was looking very much the part of a real pitcher and was even used to close games. The experiment continued in spring training in 2017 and he made the team as the first two-way player in the major leagues since Brooks Kieschnick filled a similar role with the Milwaukee Brewers in 2003 and 2004.

It did not take long for him to make his first mound appearance as, on Opening Day, April 3rd, he relieved Jhoulys Chacin in the 4th inning with the Padres already down, 7-1, to the Los Angeles Dodgers. He uncorked a wild pitch in his first pitch to Adrian Gonzalez, allowing Andrew Toles to score from third base, while apparently spiking him. He stayed in the game, but his next pitch was also wild, allowing Justin Turner to score, pushing the score to 9-1. He then walked Gonzalez and Logan Forsythe and Joc Pederson both hit deep fly balls, but they were caught at the warning track to end the inning. He then allowed a three-run shot to Corey Seager in the 5th and was pulled after 1 1/3 innings, having found out that pitching in a live game was a bit different from a mop-up appearance in a blow-out (although he did help to turn the game into a blow-out loss). Within 3 weeks, he had made his final major league appearance, recording a 14.73 ERA in 4 games and batting .143 in 8 overall games. Things did not perk up in AAA El Paso, as he recorded an eye-popping 8.21 ERA in 34 games (1 start) and 41 2/3 innings. He caught on with the Milwaukee Brewers on a minor league deal for 2018 after becoming a minor league free agent and spent most of 2019 with the NC Dinos of the KBO, hitting .246/.308/.404 before being waived in July. Prior to the 2020 season, he signed a minor league deal with the Philadelphia Phillies.