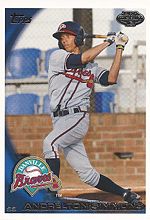 Andrelton A. Simmons
(The Wizard)

Andrelton Simmons hit .261/.321/.304 for the Blue Hawks in the 2008 Curacao league. Despite an unimpressive season at the plate and likely due to his glovework, he played for the Netherlands Antilles in the 2008 Haarlem Baseball Week, going 0 for 6 with a walk. In the 2008 Americas Baseball Cup, Simmons batted .259/.310/.296 and only making one error in eight games as a middle infielder. His 5 RBI were third on the team behind former minor leaguers Ardley Jansen and Lorvin Louisa and the Antilles won a spot in the 2009 Baseball World Cup.

In 2009, Andrelton joined the Yorkton Cardinals of the Western Major Baseball League. He was selected by the Atlanta Braves in the second round of the 2010 amateur draft. Simmons was signed by scout Gerald Turner and made his pro debut that summer.

Simmons was first called up to the major leagues on June 2, 2012 with the Braves, who inserted him as their starting shortstop. He was hitting .292 with 21 RBI in 43 games with the AA Mississippi Braves at the time. He hit safely in 17 of 25 games in June, maintaining a batting average of .333, but also adding 3 homers, 10 runs scored and 14 RBI. He clubbed his first career homer on June 9th off fellow rookie Drew Hutchison of the Toronto Blue Jays. That excellent first month earned him National League Rookie of the Month honors for June, defeating phenom Bryce Harper of the Washington Nationals in the vote. He started at shortstop for the Braves for the remainder of the season, ending up with a batting line of .289/.335/.416 in 49 games. He hit 8 doubles, 2 triples and 3 homers, scored 17 runs and drove in 19. He started the National League Wild Card Game at short on October 5th and went 1 for 4 in the 6-3 loss to the St. Louis Cardinals. He was at the center of the turning point of the game when he lifted a fly ball to shallow left with one out and two men on in the 8th inning; the ball dropped between OF Matt Holliday and SS Pete Kozma, but umpire Sam Holbrook had invoked the infield fly rule, resulting in Simmons being called out in spite of the ball not having being caught. The protest over the call caused a 19-minute delay, but it was upheld and the Braves lost their best shot at tying the game.

Simmons was a member of the Dutch national team during the 2013 World Baseball Classic. He had the first multi-homer game of his career on May 6, 2013, connecting twice and driving in four runs in a 7-4 win over the Cincinnati Reds. It was part of a solid sophomore season that saw him win a Gold Glove for his defensive prowess at shortstop, play 157 games and hit .248/.296/.396. While his batting average and OBP were not great, his contribution of 27 doubles, 6 triples and 17 homers, in addition to 59 RBIs, from the bottom of the batting order, was much appreciated. The Braves won a division title with Simmons anchoring their infield defence. In the NLDS against the Los Angeles Dodgers, he went 3 for 12 with a double as the Braves were eliminated in four games. Still management was quite pleased with his contribution, and the following off-season, he was one of several young stars who were locked up to long-term contracts. In his case, he signed a seven-year deal on February 20, 2014, guaranteeing him $58 million through 2020. He made an absolutely amazing defensive play on July 21st in a game against the Miami Marlins: with Jordany Valdespin hitting, baserunner Christian Yelich broke for second and Andrelton went to cover the bag, at which point Valdespin hit a ball through the spot Simmons had just vacated; he dove backwards to snag the ball, then dove the other way to tag the second base bag with his glove, forcing out an incredulous Yelich. He hit .244 in 146 games, but with less power than the previous season (18 doubles and 7 homers). He also won his second straight Gold Glove. He was afinalist for the award again in 2015, but lost out to Brandon Crawford. He played 147 games and hit .265 wiuth 23 doubles but only 4 homers. On November 12th Simmons was traded to the Los Angeles Angels of Anaheim with minor league catcher Jose Briceno for SS Erick Aybar, top pitching prospects Sean Newcomb and Chris Ellis, and $2.5 million.

His fist season with the Angels in 2016 was also his best with the bast, as his batting average rose all the way to .281 in 124 games, with 4 homers and 44 RBIs. He then took a big step forward in 2017 when he posted his first OPS+ over 100 since his first, abbreviated season. In 158 games, he hit .278 with surprising power - 38 doubles, 2 triples and 14 homers - resulting in an OPS+ of 103. Combine with his usual outstanding defence - he won his third Gold Glove and first in the American League, it put him into consideration for the MVP Award, as he finished 8th in the voting. He was off to a great start in 2018, hitting .330 with 4 homers and 34 RBIs in 59 games, when he was put on the shelf on June 5th due to a stupid injury: he sprained his right ankle after slipping on the dugout steps.