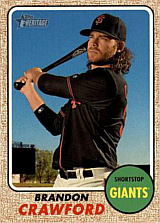 Brandon Crawford was the first shortstop to hit a grand slam in a postseason game. He is a two-time All-Star and three-time Gold Glove recipient.

A two-time team MVP with the UCLA Bruins, Brandon was drafted by the San Francisco Giants in the 4th round of the 2008 amateur draft. He was hot off an Eastern League All-Star nod in 2010 when he got the call in 2011 due to a multitude of injuries to the defending world champions. In his third at bat of his debut game, on May 27th, he joined Barry Bonds and Brian Dallimore as the only Giants to strike for a grand slam as their first hit, taking Shaun Marcum of the Milwaukee Brewers deep in a 5-4 victory at Miller Park. Further, he became only the sixth big leaguer all-time to hit a grand slam in his first game. He played 66 games in his first look, failing to log more heroics with the bat in finishing at .204/.288/.296.

Brandon carpe'd the diem in 2012, becoming the Giants' full-time shortstop following the departure of Orlando Cabrera. He hit his second career grand slam on July 20th, part of a 5-RBI day as the Giants topped the Philadelphia Phillies, 7-2. He finished third in Defensive Runs Saved and sparkled with his glove in the postseason as the Giants swept the Detroit Tigers for their second world title in three years. His bat seemed particularly keen on hovering between .246 and .250, batting .248/.311/.363 in 2013 and .246/.324/.389 with 20 doubles, 10 triples and 10 home runs in 2014. He hit another memorable grand slam on October 1, 2014, in the 5th inning of the NL Wild Card Game against the Pittsburgh Pirates. Facing Edinson Volquez in a scoreless game, he belted a pitch into the right field seats at PNC Park to put his team ahead, 4-0, on their way to an 8-0 win. He was the first shortstop ever to hit a postseason a grand slam. The Giants went on to defeat the Kansas City Royals in 7 games in the World Series as Crawford hit .304, giving him his second World Series ring.

On May 16, 2015, he set a personal mark when he drove in 6 runs in an 11-2 win over the Cincinnati Reds; that game included another slam, this one off Mike Leake. It was a prelude to his best offensive season thus far, when he hit .256/.321/.462 with 33 doubles and 21 homers, becoming the first Giants shortstop to lead the club in bombs since Bill Dahlen 110 years earlier. He was named to the All-Star team for the first time and not only won a Silver Slugger as the best-hitting shortstop in the National League, but also displaced Andrelton Simmons as the winner of the Gold Glove, recognizing the best fielder at the position. The Giants rewarded him after the season by signing him to a six-year contract extension worth $75 million. On August 8, 2016, he collected 7 hits in a single game as the Giants defeated the Miami Marlins in 14 innings. He was the first major league player in 41 years to record that many, after Rennie Stennett for the Pittsburgh Pirates in a nine-inning game against the Chicago Cubs on September 16, 1975. His 14th-inning single off Andrew Cashner proved the game-winner as San Francisco prevailed, 8-7. He was again the hero on August 10th as his solo homer off David Phelps turned out to be the only run in a 1-0 win over the Marlins. He hit .275/.342/.430 in 155 games, with a National League-leading 11 triples, while scoring 67 runs and driving in 84. He went 1-for-3 and scored a run in San Francisco's game-winning rally against the New York Mets in the 9th inning of the Wild Card Game on October 5th, then was 4-for-17 with a pair of doubles as the Giants were defeated by the Chicago Cubs in the Division Series.

In 2017, the Giants took a nosedive, landing in last place in the NL West. Brandon hit .253/.305/.403 with 34 doubles, 14 homers and 77 RBI. He continued to play great defense, winning his third straight Gold Glove. The Giants bounced back to some extent in 2018 and, on June 10th, he just about single-handedly defeated Max Scherzer of the Washington Nationals as he hit a two-run homer in the 4th and added two more hits against the ace, then added another hit later in the game to lead San Francisco to a 2-0 win that snapped a nine-game winning streak by Scherzer. Crawford was hitting a scorching .439 since May 1st and raised his batting average on the year to .338. Despite a starting All-Star nod at shortstop, this hot start did not last as he finished the season at .254/.325/.394 in 151 games with 14 homers and 54 RBI, returning to his career norms. On July 15, 2019, he had a great day in a doubleheader sweep of the Colorado Rockies at Coors Field: in the opener, he went back-to-back with Mike Yastrzemski in the 1st inning on his way to going 5-for-6 and tying a team record with 8 RBI in a 19-2 demolition of the Rox. In the second game, he again went back-to-back, this time following Stephen Vogt's long ball in the 4th, and the Giants won, 2-1. Overall, however, his bat continued its downward slope, hitting .228/.304/.350 with 11 homers and 59 RBI.

Brandon's sister, Amy, is married to Gerrit Cole, the boys having been teammates at UCLA.