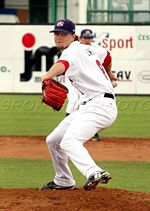 Mike Leake was a top-10 draft pick by the Cincinnati Reds in the 2009 amateur draft who bypassed the minor leagues completely before making his major league debut on April 11, 2010. As of 2020, he was the most recent player to do this; he was not entirely without pro experience, though, as he had appeared in the Arizona Fall League in 2009.

As a freshman at Arizona State University, Mike was 13-2 with a save and a 3.69 ERA to tie for the Pacific-10 Conference lead in wins, even with Josh Satow. He was named a third-team All-American by Collegiate Baseball. He set school freshman records for innings (127) and strikeouts (94). Leake was the only freshman pitcher to make All-Pac-10 that year. He hit .176/.200/.235 in limited time at the plate.

In 2008, the sophomore sensation had a 11-3, 3.49 record with a save. He fanned 104 while walking 20 and also picked off nine batters. Playing the field at times, he hit .340/.500/.574, playing every infield and outfield position except third base. He was named Pac-10 Pitcher of the Year, finishing second in the Conferenmce in wins, third in strikeouts and 8th in ERA while leading in innings (121). He was a second-team All-American according to both Collegiate Baseball and Baseball America.

In 2009, Mike was 16-1 entering the 2009 College World Series, leading NCAA Division I in wins. The Cincinnati Reds chose him 8th overall in the 2009 amateur draft, the 25th first-round pick ever from Arizona State. Leake was signed by scout Clark Crist, but did not pitch again in 2009 until he appeared in the Arizona Fall League for a half-dozen games. He then received an invitation to the Reds' spring training in 2010. Although overshadowed by Cuban defector Aroldis Chapman and his 100 mph fastballs, Leake impressed the team's brass enough that he won the team's fifth starter job and made his major league debut on April 10th against the Chicago Cubs, effectively bypassing the minor leagues. He was only the 21st drafted player to go directly to the major leagues since the institution of the amateur draft in 1965. In his debut, he gave up only one run in 6 2/3 innings but did not figure in the decision as the Reds won, 3-1. He collected his first major league win on April 22nd, 8-5 over the Los Angeles Dodgers. He completed his first season with an 8-4 record and a 4.23 ERA in 24 games (22 starts), with 91 Ks and 61 walks in 138 1/3 innings. He was shut down towards the end of the season as the Reds' management wanted to limit his innings and was not used in the postseason.

Leake started the 2011 season with wins in two of his first three starts, but then made the headlines for the wrong reasons when he was arrested on April 18th in a downtown Cincinnati Macy's department store for shoplifting. Security cameras had caught him removing security tags on 6 tee-shirts, worth around $60, and then walking out without paying for the merchandise. He appeared in court the next day and his attorney requested that he be allowed to enter a diversion program for first-time offenders, which would allow him to continue to pitch after admitting his guilt, paying a fine and performing volunteer work. Overall, he was 12-9, 3.86 in 29 games, including 26 starts, as his season was once again cut short because the Reds did not want to see his total of innings pitched increase too much over previous years. He pitched 167 2/3 innings, 30 more than he had pitched as a rookie the previous season. He walked only 38, putting him 10th in the 2011 NL in lowest walk rate, right behind teammate Bronson Arroyo.

On May 21, 2012 Mike hit his first career homer off Mike Minor of the Atlanta Braves in winning the game, 4-1. It was his first win of the year after starting out 0-5. He pitched his first career complete game on June 29th, besting Matt Cain and the San Francisco Giants, 5-1, to improve his record to 3-5. He finished the year at 8-9, 4.58 in 30 starts, pitching 179 innings during which he gave up 201 hits. He was not on the team's roster at the start of the postseason, but the Reds' plans changed when ace Johnny Cueto was forced to leave Game 12 of the NLDS with an injury in the 1st inning; starter Mat Latos took over on the mound in the 3rd inning, after taking time to warm up while reliever Sam LeCure was pitching, the result being that the Reds now needed someone to start Game 4 with Cueto and Latos both unavailable. Cueto was placed on the disabled list and Leake took his place, getting the starting assignment. However, he gave up five runs to the San Francisco Giants in 4 1/3 innings and was charged with the 8-3 loss that tied the series at two games each. The Reds then lost the decisive Game 5 and were ousted from the postseason.

Leake had a great all-around day on April 17, 2013, facing the Philadelphia Phillies. On the mound, he pitched seven scoreless innings, and at the plate, he collected three hits and scored three runs to lead the Reds to an 8-2 win, his first of the season. He had his best season that year, as he ended the season with a record of 14-7, and a 3.37 ERA in 31 starts, logging 192 1/3 innings. The Reds were one of two National League wild card teams that season, but he did not pitch in the Wild Card Game against the Pittsburgh Pirates. In 2014, he set personal bests for innings (214 1/3) and strikeouts (164) although his record fell to 11-13, 3.72. Given the fall of offensive levels around baseball that year, his ERA+ was actually below 100, at 97.

It took Leake a month to record his first win of 2015, but when he did so on April 30th against the Atlanta Braves, it was a beauty. He pitched 8 scoreless innings and homered off Shelby Miller in the 7th, the 5th long ball of his career. The Reds struggled all season, but Mike was one of the few bright lights, as in 21 starts, he went 9-5, 3.56. Given his team,s poor play, his name and that fellow starter Johnny Cueto were the subject of numerous trade rumors as the trading deadline came nearer, and both ended up with new teams. On July 31st, he was sent to the San Francisco Giants in return for Adam Duvall and Keury Mella. He made one start with the Giants, losing, 9-6, to the Texas Rangers when he gave up 2 runs in 6 1/3 innings on August 2nd, then went on the disabled list a week later with a strained hamstring. On [[September 30]th, he pitched the first shutout of his career in defeating the Los Angeles Dodgers, 5-0 on a two-hitter. Unfortunately, it came one day after the Dodgers had eliminated the Giants from postseason contention. He went 2-5, 4.07 in 9 starts for the Giants, to finish the season at 11-10, 3.70 in 30 starts, with 192 innings pitched. 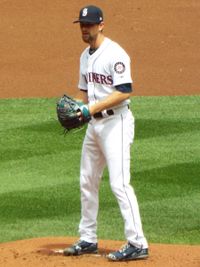 He became a free agent after the 2015 season, and after the first wave of top-tier free agent pitchers, including David Price, Zack Greinke and Johnny Cueto, signed big time contracts, he found himself in high demand as one of the better options remaining on the market for the teams still looking for starting pitching. He was thus able to sign a five-year, $80 million deal with the St. Louis Cardinals on December 22nd. The Cards had lost John Lackey to free agency and Lance Lynn to Tommy John surgery and were willing to pay top dollar for a reliable starter. He made 30 starts for the Cards in 2016, but went only 9-12, 4.69. His ERA+ of 87 was the worst of his career and his 9 wins his fewest since 2012. He gave up 203 hits in 176 1/3 innings, but on the positive side, walked only 30 batters while striking out 125. In 2017, he started the year well as he was 5-3, 2.24 at the end of May, but struggled after that. After 26 starts, he was 7-12, 4.21 when on August 30th, he was traded to the Seattle Mariners in return for minor leaguer Rayder Ascanio. The trade gave Mike a lift, as he won his first three starts for the Mariners, helping to keep them alive on the fringes of the postseason race. He went 3-1, 2.53 in 5 starts for Seattle to finish the year a combined 10-13, 3.92.

With the Mariners in 2018, Mike made 31 starts and finished at 10-10, 4.36. It was a disappointing season as the M's started strong but faded completely in the second half and finished well out of the postseason picture. The team had a fire sale after the season, but he was one of the few veterans with trade value to remain with the team. On July 19, 2019, he took a perfect game into the 9th inning before giving up a lead-off single to Luis Rengifo of the Los Angeles Angels. He had to settle for a one-hit shutout in a 10-0 win. On July 31st, he was traded by the Mariners, but not to a contender, as he was sent to the Arizona Diamondbacks for minor leaguer Jose Caballero. He was 9-8, 4.27 in 22 starts at the time. The D-Backs needed a starting pitcher to take the place of Zack Greinke, whom they had just traded for a haul of prospects. He made 10 starts for the Diamondbacks the rest of the way, going 3-3, 4.35, to finish the season at 12-11, 4.29. On June 29, 2020, he was part of the first group of players to announce that they would sit out the abridged upcoming season due to concerns over health and safety.

Beginning with his time with the Cardinals, he has taken to wearing a single-digit number - #8 - which is unusual for a pitcher.