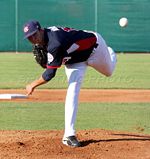 Mike Minor was a first-round pick in the 2009 amateur draft and came to the majors the next year.

In 2007, Mike was 9-1 with two saves and a 3.09 ERA as a freshman. He was named a Freshman All-American by both Baseball America and Collegiate Baseball. He was 8th in the Southeastern Conference in ERA but was overshadowed by teammates David Price (the first overall draft pick that year) and Casey Weathers.

Minor fell to 7-3, 4.28 as a sophomore but fanned 101 in 103 innings (the Conference leader in innings). He returned to team USA and went 3-0 with a 0.75 ERA as their workhorse, winning Baseball America Summer Player of the Year honors. Minor was named Best Pitcher of the 2008 Haarlem Baseball Week, going 2-0 with one unearned run allowed in 12 1/3 innings. His best game was a 1-0 victory over Cuba, which was prepping for the 2008 Olympics with the Haarlem tournament. He tied Kyle Gibson and Stephen Strasburg for the most wins in the event and was second to Shinji Iwata in ERA.

In the 2008 World University Championship, he was 1-0 with a 1.15 ERA, fanning 16 and allowing 8 hits in 15 2/3 innings for the Gold Medal-winning USA. He tied for 4th in the tourney in strikeouts, behind Strasburg, Yuki Saito and Mark Hardy. In the finale, he worked into the 10th in an excellent duel with Japan's Iwata before leaving.

Minor was 6-6 with a 3.90 ERA in 2009. The Atlanta Braves took him 7th overall in the 2009 amateur draft. He was signed by scout Brian Bridges and made his pro debut that summer with the Rome Braves, allowing just 1 earned run over 14 innings. In the 2010 Futures Game, Mike pitched the 5th inning in the US's 9-1 win over the World. Relieving Zack Wheeler, he got Gorkys Hernandez on a fly, Francisco Peguero on a grounder and Brett Lawrie on a fly before giving way to Shelby Miller.

In his big league debut, the southpaw began by allowing a leadoff single to Michael Bourn, who was stranded. He had a 2-0 lead entering the third but allowed three runs and an unearned run in the 6th before leaving for PH Brooks Conrad, exiting with a 4-4 tie. He had gotten two trips to the plate as well, grounding out and walking against Bud Norris.

Minor completely missed the 2015 and 2016 seasons because of a torn labrum but made a nice comeback with the Kansas City Royals in 2017, pitching 65 times as a reliever and putting up a record of 6-6, 2.55 with 6 saves while logging 77 2/3 innings. He signed as a free agent with the Texas Rangers before the 2018 season and was moved back to starting. After losing his first start, on April 7th he recorded his first win as a starting pitcher since August of 2014, when he was still with the Braves, by defeating the Toronto Blue Jays, 5-1. It was one of the coldest games ever played at Globe Life Park, but it did not bother him as he kept the Jays hitless until the 5th and ended up giving up just 2 hits in 6 innings to earn the win. On June 27th, he took a perfect game into the 7th inning against the San Diego Padres before allowing a one-out single to Eric Hosmer. He completed 7 scoreless innings and was given credit for the 5-2 win. He finished the season at 12-8, 4.18 in 28 starts, logging 157 innings and striking out 132 batters. He led the Rangers' staff in wins, innings pitched and strikeouts and had the best ERA among all pitchers with 4 or more starts.

In 2019, he picked up where he had left off the previous season by recording his first first career shutout, and only the second complete game, of his career on April 16th. He limited the Los Angeles Angels to 3 singles in tossing a 5-0 win. He was continually ranked among the top pitchers in the American League throughout the year, by measures such as WAR or Win Probability Added. He was named to the All-Star team for the first time. He had another great start on August 11th, when he allowed no runs on 4 hits and struck out 11 in 8 innings in a 1-0 win over the Milwaukee Brewers. On September 2nd, he pitched 7 1/3 scoreless innings against the New York Yankees before the bullpen completed the 7-0 shutout; that win stopped a streak of 220 games without being shut out by the Yankees, the second longest in history. On September 26th, he made his final start of the season against the Boston Red Sox. With one out in the 9th inning, Chris Owings hit a pop-up near home plate on a 1-1 count, but Minor, catcher Jose Trevino and 1B Ronald Guzman concerted to let the ball drop foul. Minor then struck out Owings on the next pitch, reaching the 200 mark for the first time of his career, and he then gave way to relief pitcher Jose Leclerc, who recorded the final out in a 7-5 win. There was some controversy over the play that set up the strikeout, but the game was meaningless, Minor was only still pitching in order to reach the milestone, and the Red Sox had been swinging early and not working counts, so there were extenuating circumstances. He finished the year at 14-10, 3.59 in 32 starts, with 208 1/3 innings.

In 2020, he was charged with a loss in 5 of his first 7 starts with the Rangers as he gave up 23 runs over 35 1/3 innings for an ERA of 5.60. With the Rangers in the bottom of the standings, he and fellow veteran starter Lance Lynn, who in contrast had been pitching brilliantly, were both expected to be available to other teams at the trading deadline. In the end, it was only Minor who was traded on August 31st, heading to the Oakland Athletics in return for two players to be named later. Given the shutdown of the minor leagues that season, due to the Coronavirus pandemic, any minor league player not in a team's 60-player pool could only be traded at the conclusion of the season, which is why PTBNLs popped out all over the place on that particular day. The A's eventually sent Dustin Harris and Marcus Smith to the Rangers to complete the deal. With Oakland, Mike was 1-1, 5.48 in 5 games, including 4 starts, to finish at1-6, 5.56. He pitched 3 times in relief against the Houston Astros in the Division Series, not allowing a run in 3 2/3 innings.

He became a free agent following the 2020 season and signed with the Kansas City Royals on December 1st. He made 28 starts for the Royals in 2021, with a record of 8-12, 5.05 and 149 strikeouts in 158 2/3 innings. On March 16, 2022, on the same day the Royals signed veteran Zack Greinke to a one-year contract, they traded Minor to the Cincinnati Reds in return for reliever Amir Garrett.