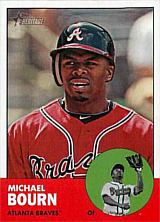 Michael Bourn was an All-Star center fielder known for his exceptional speed and defensive prowess.

Bourn was drafted in the 19th round of the 2000 amateur draft by the Houston Astros but did not sign. He remained in Houston for college and hit .303/.431/.330 his freshman year with 35 stolen bases and only six extra-base hits. In 2002, Houston was ranked 10th in the country by Baseball America and Bourn hit .328/.446/.381; he led Conference USA with 32 stolen bases, two ahead of James Jurries. 2003 marked a continued steady run at .330/.411/.407 with a double in 182 at bats and 23 steals. The Philadelphia Phillies took the speedy OBP machine with their 4th-round pick of the 2003 amateur draft. He was signed by scout Dave Owen and made his pro debut that summer.

Bourn debuted with the 2003 Batavia Muckdogs and batted .280/.404/.296 with 23 steals in 28 tries and 23 walks in 35 games; he had one extra-base hit, a triple. In 2004, Michael hit .315/.431/.467 for the Lakewood Blue Claws. He scored 92 runs, had 39 extra-base hits (including 14 triples), walked 85 times and stole 58 bags while only getting caught 6 times. He was rated the 21st-best outfield prospect in baseball by Baseball America and the #11 prospect in the South Atlantic League. He tied for 7th in the SAL in average and led the league in OBP, walks, steals and triples. The speedster was with the Reading Phillies in 2005 and put up a .268/.348/.364 line with 38 steals in 50 tries, 80 runs scored and 8 triples, but 123 strikeouts for the patient, punchless player. He fielded .997 and had 21 outfield assists. He led Eastern League outfielders in fielding percentage, assists and double plays (an impressive 9) while finishing 10 putouts behind leader Chris Roberson. He was rated the 18th-best prospect in the EL and Baseball America labeled him the league's "Most Exciting Player." Michael began 2006 back with Reading. The 23-year-old fly hawk hit .274/.350/.365 with 30 steals in 34 attempts. On July 4, he moved up to the Scranton-Wilkes Barre Red Barons and hit .283/.368/.428 with 7 triples in 38 games and 15 stolen bases in 16 attempts. He also got a 17-game look with the 2006 Phillies, mostly as a defensive sub. Bourn tied for 4th in the minors with 13 triples overall. Baseball America rated him the fastest baserunner in the Eastern League and the #17 prospect in the International League.

Bourn hit .277/.348/.378 in 105 games for the 2007 Phillies, playing almost entirely as a pinch-runner and defensive substitute. He only had 119 at bats; he stole 18 bases while only being caught once and was error-free in the outfield. The Houston Astros obtained him in a trade for Brad Lidge and Eric Bruntlett before the 2008 season. He played poorly his first season back home, hitting only .229 with no power and an on-base percentage below .300, but improved dramatically in 2009. Installed as the Astros' starting center fielder, he raised his batting average to .285, drew 63 walks and stole a league leading 61 bases while scoring 97 runs. He was also awarded a Gold Glove for his defensive play in the outfield. He repeated as Gold Glove winner in 2010 while being named to the All-Star team for the first time. He hit .265 in 141 games and led the National League in stolen bases with 52 while scoring 84 runs.

In 2011, he began the year hitting .303/.363/.403 in 105 games for the Astros. On July 31st, he was traded to the Atlanta Braves in return for Jordan Schafer and three prospects - Juan Abreu, Paul Clemens and Brett Oberholtzer. It was widely noted that, at the time, he had a league-leading 39 stolen bases while the Braves as a team had only swiped 42. He finished the year hitting .278 in 53 games for the Braves with 22 steals. The 61 stolen bases between the two teams gave him the most in the National League for the third straight year (he also led the circuit by being caught stealing 14 times). He hit a combined .294 with 94 runs scored. However, the Braves collapsed late in the season when they had appeared a sure bet to be the NL's wild card team and, as a result, Bourn failed to return to the postseason. In 2012, he was the Braves' starting center fielder, playing 155 games while maintaining a batting line of .274/.348/.391 and making a second appearance in the All-Star Game. He hit a career-high 9 homers, to go along with 26 doubles and 10 triples, scored 96 runs and drove in 57. His 42 steals were only 2 behind league-leader Everth Cabrera, although he again had the most caught stealing, with 13. The Braves won the right to host the first-ever National League Wild Card Game, but lost at home to the St. Louis Cardinals, 6-3, as Bourn went 1 for 5 with an RBI.

Bourn became a free agent after the season and, on February 11, 2013, it was announced that he had agreed to a four-year contract with the Cleveland Indians for a total of $48 million. He had been courted by a number of teams, but saw his value drop when two of the frontrunners, the Washington Nationals and Philadelphia Phillies, elected to fill their need for a center fielder via trades. Unfortunately for the Indians, Michael hit the disabled list early, being placed on it April 16th as the result of a cut index finger, an injury sustained when he was stepped on by Chicago White Sox pitcher Matt Thornton while diving to first base two days earlier. He ended up playing 130 games and hit .263 with 6 homers and 50 RBI for the Indians. He also scored 75 runs and stole 23 bases. The Indians made it to the American League Wild Card Game that season, but he went 0 for 4 as their lead-off hitter in a 4-0 loss to the Tampa Bay Rays. In 2014, Michael played only 106 games but still ended up leading the American League with 10 triples. Otherwise, his year was not so great as, apart from the time missed, he hit only .257, his lowest batting average since 2008, scored 57 runs and drove in 28. He also seemed to lose his ability to steal bases, as he was successful on only 10 of 16 attempts.

In 2015, he was hitting only .246 with no homers and 19 RBI in 95 games when, on August 7th, he was traded back to the Atlanta Braves, along with Nick Swisher, in return for Chris Johnson. There, he hit only .221 in 46 games to finish at .246 with no homers and 19 RBI in 95 games. He went to spring training with the Braves in 2016 but was cut on the last day after losing a battle for a backup outfield spot to Drew Stubbs. The Toronto Blue Jays gave him a look in their minor league system, but he did not stick. On May 10th, he signed a contract with the Arizona Diamondbacks, who needed a center fielder following an injury to A.J. Pollock. He played 89 games and hit .261 with 43 runs scored, showing he could still be of use. Shortly after Pollock returned to play in late August, he was traded to the Baltimore Orioles in return for minor leaguer Jason Heinrich on August 31st. The Orioles needed a center fielder for the stretch run because of an injury to Adam Jones. Bourn hit .283 in 24 games and started the Wild Card Game against the Toronto Blue Jays on October 4th in right field, going 1 for 4 with a stolen base. The Orioles were pleased with his contribution and brought him back to spring training on a minor league contract in 2017. However, just days into camp, he broke a finger while catching a football, putting him out of action for a month. He was released in May and saw his last bout of action as a professional in the Los Angeles Angels chain in June.