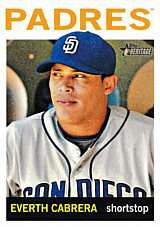 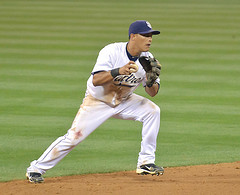 Everth Cabrera is one of the unlikeliest All-Stars in MLB history, reaching the 2013 contest by virtue of the "every team must be represented" law. A few months later, he would be swept up in the Biogenesis scandal, hastening his big league departure. An infielder, Everth was the 10th major leaguer born in Nicaragua.

Cabrera was signed by scouts Rolando Fernandez and Francisco Cartaya for the Colorado Rockies in 2004. He began his professional career with two seasons with the DSL Rockies before coming stateside in 2006 with the Casper Rockies. In 54 games, he hit .254 with 18 stolen bases. In 2007, he played for the Tri-City Dust Devils and Modesto Nuts, hitting .300 with 12 stolen bases in 150 at bats for the former and .267 in 15 at bats for the latter. While with the Asheville Tourists in 2008, he hit .284 with 73 stolen bases in 121 games.

Cabrera was selected by the San Diego Padres from the Rockies in the 2008 Rule V Draft and made the team out of spring training, collecting a hit and a walk in two at bats in his debut against the Los Angeles Dodgers on April 8th. Never much with the bat, it took him until 2012 to become a trusted contributor, leading the NL in stolen bases (44) while hitting just .246/.324/.324 in 115 games. He was enjoying his finest season in 2013, leading the NL again in steals (37) and hitting .283/.355/.381 in 95 games as the Pads lone All-Star, not appearing in the game. On August 5th, 2013, he was slapped with a 50 game ban following being linked to the Biogenesis mess enveloping the league. He returned in 2014 and reclaimed his starting job, although his batting line went kerplunk (.232/.272/.300) in 90 games, stealing 18 bags and scoring 36 times.

Everth found more trouble when he was arrested for driving under the influence in early September 2014; the US Border Patrol in Dulzura, CA determined that he had also consumed marijuana. He was on the disabled list with a hamstring injury at the time. In November, he was formally charged with resisting arrest over the incident, in addition to being fined for possession of marijuana. He was sentenced to probation and community service. The Pads set him adrift, Everth finishing his big league career as J.J. Hardy's caddy at shortstop with the 2015, hitting only .208/.250/.229 in 29 games. He spent three seasons in the Mexican League, last spotted with Leones de Yucatán in 2018.