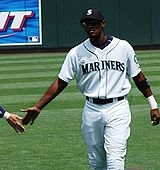 Adam Jones made his major league debut in 2006. After breaking into the majors prior to turning 21, he spent two years with the Seattle Mariners and had a breakthrough year with the Baltimore Orioles in 2009.

Jones hit .348 as a high school senior. He was the first selection of the Mariners in the 2003 amateur draft. The 37th overall pick, he was compensation for the club's failure to sign 2002 first-rounder John Mayberry Jr.. He was signed by scout Joe Bohringer for a bonus of $925,000. A shortstop and pitcher in high school, he played solely shortstop in the minors that year. Jones hit .284/.368/.349 for the AZL Mariners and .462/.467/.538 in three games for the Everett Aqua Sox. He was picked as the 8th-best prospect in the Arizona League by Baseball America.

Jones batted .277/.320/.472 for the Tacoma Rainiers in 2006, moving to the outfield, and on July 14th was called up to the Mariners. He was rated as the Pacific Coast League's #8 prospect by Baseball America, between Chris Young and Jason Hirsh. He popped up against Casey Janssen in his major league debut and went 0 for 3 with a walk and a time caught stealing. He began his career in The Show 0 for 12 before a single off of Sidney Ponson for his first big league hit. Jones hit .216/.237/.311 in 32 games for the Mariners.

Jones made the PCL All-Star team in 2007, joining Delwyn Young and Rick Ankiel in the outfield. He hit .314/.382/.586 for Tacoma and was named The Mariners Minor League Player of the Year. He led Seattle farmhands in average and slugging. He was rated as the best defensive outfielder and having the best outfield arm in the PCL according to Baseball America. They ranked him as the PCL's #2 prospect, behind only Yovani Gallardo and right ahead of Billy Butler, Andy LaRoche and Ian Stewart.

With the Mariners in 2007, Jones batted .246/.300/.400 in 41 contests. After the season, Jones was the centerpiece in a package including George Sherrill, Chris Tillman, Tony Butler and Kam Mickolio that Seattle sent to the Baltimore Orioles for Erik Bedard. He played 132 games in 2008, batting .270 with 9 homers and 57 RBI.

In the first half of the 2009 season, Jones played great, placing in the top ten in the 2009 American League in many offensive categories. He was named the Orioles' representative in the 2009 All-Star Game. He also won a Gold Glove for his excellent defense in center field. However, he was slowed by injuries in the second half, deflating his overall numers; played 119 games, hitting .277 with 22 doubles and 19 homers, 83 runs and 70 RBI. In 2010, he played 149 games with a .284 average, with 25 doubles and 15 homers. He had a similar solid but not spectacular season in 2011. He played a career-high 151 games, with 26 doubles and 20 homers - his first season of 20 or more long balls. He drove in 83 runs, also a career high. However, his OBP was only .319, around his career norm, because of a very poor K/W ratio of 113/29, characteristic of his biggest weakness as a hitter - his lack of plate discipline.

On May 27, 2012, Jones signed the largest contract in Orioles history, a six-year deal worth $85.5 million. He was off to his best start since his All-Star season, with a 17-game hitting streak and the team lead in homers and RBI with the Birds holding on to a surprising first place in the AL East. He went on to have an excellent season, playing all 162 games and hitting .287/.334/.505 with 39 doubles, 32 homers and 82 RBI. He made the All-Star team for the second time and was voted a Gold Glove recipient for his play in centerfield. The Orioles made it to the postseason as one of two wild card teams in the AL, having battled the New York Yankees for the division title until the last day of the season. He went hitless in the Wild Card Game which the O's won over the Texas Rangers and only 2 for 23 in the ALDS, as his team bowed out to the Yankees in five games.

In 2013, Jones accepted an invitation to join Team USA for the 2013 World Baseball Classic, explaining that representing his country in such a prestigious tournament was a "no-brainer". He was the starting centerfielder for the team. He repeated as a mid-season All-Star, this time being voted a starter by fans. He responded by hitting a thrilling homer against the Yankees the next day, connecting for a two-run shot off the great Mariano Rivera with the two outs and the O's down 1-0 in the 9th.

On May 1, 2017, he caused a stir by telling the media he had been the victim of racial taunts and had had a bag of peanuts thrown at him during that night's game at Fenway Park. The Red Sox were embarrassed by the revelations and acted swiftly to ensure such incidents would not be repeated, threatening offending fans with a permanent ban from the ballpark. Team President Sam Kennedy apologized to Jones on behalf of the team, and a couple of days later, the Red Sox announced that they had identified a spectator involved in the incident, that he had been permanently banned from the ballpark, and that the file had been turned over to the police to investigate whether further action was warranted under Civil Rights statutes. The crowd the following day also repudiated the actions of a minority among them by giving Jones a loud and prolonged standing ovation when he first came to bat. He played his 11th and final season with the Orioles in 2018, and it was a tough one as the team set a franchise record with 115 losses. Management decided to launch a fire sale in mid-season, and Jones would have been one of the players traded had he not vetoed a deal with the Philadelphia Phillies. He ended up hitting .281 in 145 games, with 15 homers and 63 RBIs and was moved out of centerfield late in the year.

Jones became a free agent after the 2018 season, and it took him a long-time to find a team, not signing a contract until March 10, 2019, when he agreed on a one-year deal with the Arizona Diamondbacks for $3 million. He was initially slated to be used as the team's fourth outfielder, but plans changed in the last days of spring training when OF Steven Souza suffered a season-ending knee injury, turning Jones into an undisputed starter in the outfield. He ended up playing 137 games during which he hit .260 with 16 homers and 67 RBIs. It was decent production for someone who had been signed to be a back-up, but it was clear that he was reaching the end as his OPS+ of 87 was his lowest since he was a 22-year-old in 2008, and his defensive numbers were also going down significantly. He was a free agent again after the season and this time looked towards Japan to prolong his career, signing with the Orix Buffaloes. He played 87 games for the Buffaloes in 2020, hitting .258 with 12 homers and 43 RBIs, his rate stats being very similar to those he had put up in his previous season with the D-Backs.

In 2021, returning to Orix for a second season, he also made himself available to the United States Olympic Team that was hoping to qualify for the delayed 2020 Olympic Games. Nippon Pro Baseball had decided to take a lengthy break around the staging of the games in order to allow the league's best players to compete in the Olympics, and Jones wanted to take advantage of the opportunity. He was also aiming to become the first player to ever win gold at both the WBC and the Olympics, something no one had yet achieved. By the time the Olympics rolled around, Jones was not hitting that well in Japan and was left off Team USA.