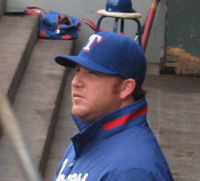 Pitcher Sidney Ponson won 17 games in 2003 in a season split between the Baltimore Orioles and San Francisco Giants. He became a free agent after the season and landed a big contract, but after that, he struggled both on and off the field. In 2004, he returned to the Orioles, but lost 15 games and had a 5.30 ERA. The next year, 2005, his ERA ballooned to 6.21, and he lost 11 games. He was also arrested three times, twice for drunken driving and once for his involvement in a fight on an Aruban beach. Citing his conduct, the Orioles released Ponson on September 1st. Later that year, he was convicted of drunk driving and sentenced to five days in jail.

As a Dutch subject, Ponson, along with Gene Kingsale and Calvin Maduro, was knighted by Queen Beatrix of the Netherlands on August 7, 2003.

After some dreadful pitching in 2006 and 2007, Ponson went 4-1 with a 3.88 ERA for the 2008 Texas Rangers but was released in early June; general manager Jon Daniels said it was due to his "disrespecting teammates and club personnel". He still landed on his feet as the New York Yankees picked him up on June 18th to make some emergency starts in the wake of Chien-Ming Wang's foot injury.

Ponson made his long-awaited Dutch national team debut in the 2009 World Baseball Classic, going 1-1 with a 4.00 ERA. He allowed 8 baserunners in 4 innings in the opener against the Dominican national team but just one run - a solo homer to Miguel Tejada - before being relieved by Alexander Smit, who let an inherited runner score. The Dutch went on to win 3-2, with Ponson getting the decision. He gave up two runs in 5 innings and took a 3-1 loss; one of the runs was a Miguel Cabrera homer. Ponson's national team stint earned him a contract with the Kansas City Royals but he would not be allowed back in international play for two years as he tested positive for Phentermine, a stimulant and appetite suppressant.