The 2012 All-Star Game was played on July 10th, 2012 at Kauffman Stadium in Kansas City, Missouri. It was the 83rd All-Star Game between the two major leagues.

There was some question initially about whether Tony LaRussa would manage the National League squad, given his retirement following the St. Louis Cardinals win in the 2011 World Series, but on January 24th, Commissioner Bud Selig confirmed that LaRussa would be given the opportunity. There was a precedent for this decision, with John McGraw managing the NL team in the first Midsummer Classic in 1933, a year after retiring following the 1932 World Series.

When Prince Fielder was voted in, he and his father Cecil Fielder became the first father-son combination to represent the same team in the All-Star Game for the American League. In the NL, Felipe Alou/Moises Alou and Bobby Bonds/Barry Bonds had been All-Stars for the Giants while Ken Griffey Sr. and Ken Griffey Jr. had done it for the Reds.

Tony LaRussa former manager of the St. Louis Cardinals managed the National League team, with coaches Ron Roenicke of the Milwaukee Brewers and Terry Collins of the New York Mets.

Ron Washington of the Texas Rangers managed the American League team, with coaches Ned Yost of the Kansas City Royals and Bob Melvin of the Oakland Athletics. 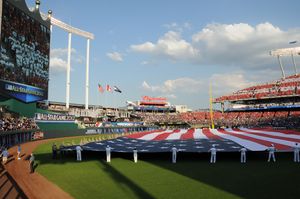 Giant American flag on the field before the game.

The National League won the 2012 All-Star Game, 8-0, with a superb pitching performance and an explosive first inning offense.

The AL turned to Tiger ace Justin Verlander, the defending AL MVP and the league leader in strikeouts. He began by whiffing Carlos González but then fell apart. Melky Cabrera singled to left and Ryan Braun, Verlander's MVP counterpart in the Senior Circuit, doubled in Cabrera. Verlander recovered to get Joey Votto looking a full-count strike 3 but walked Carlos Beltrán and Buster Posey to load the bags. Pablo Sandoval made him pay with a 3-run triple, then Dan Uggla singled in Sandoval to make it 5-0. That tied the All-Star Game record for runs in an inning.

Staked to a strong cushion, Matt Cain and ten relievers proceeded to whitewash the AL. The last time the National League had shut out the AL was in the 1996 All-Star Game. Chipper Jones was the only NL player to appear in both games; in his final All-Star plate appearance, Jones singled off Chris Sale (who was only 7 years old back in '96).

The only other scoring came in the 4th. Matt Harrison got a quick two outs but Rafael Furcal tripled, pinch-hitter Matt Holliday singled and Cabrera drilled a home run to left to win himself All-Star Game MVP honors.

The NL set a Midsummer Classic record with three triples - in addition to the ones by Sandoval and Furcal, Braun added one.