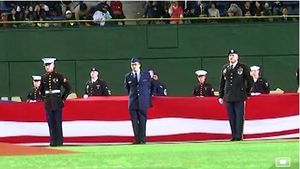 US Army band performing at the Tokyo Dome for the opener in Japan.

The 2012 Seattle Mariners opened their season at the Tokyo Dome in Tokyo, Japan, with a pair of games against the Oakland Athletics on March 28-29. Seattle won the opener, 3-1 in 10 innings, but lost the second game, 4-1. They then returned to Arizona to complete spring training before resuming the season a week later.

On June 8th, the Mariners tied a record by using six pitchers in throwing a 1-0 no-hitter against the Los Angeles Dodgers in an interleague game. Kevin Millwood started the game but left after six innings because of a mild groin strain and the game still scoreless. Charlie Furbush got the first two outs in the 7th, but placed a runner on second base in a throwing error. Stephen Pryor replaced him and got the inning's last out, after which the Mariners scored the game's lone run on Kyle Seager's tow-out single that drove in Ichiro Suzuki. Pryor got himself in trouble by walking the first two men he faced in the 8th, and was replaced by Lucas Luetge, who allowed a sacrifice hit to the only batter he faced. With both runners in scoring position, Brandon League turned in a clutch performance to retire the next two batters and preserve both the lead and the no-hitter. Tom Wilhelmsen then retired the three batters he faced in the 9th in order to complete the feat and pick up the save. Ironically it was Pryor, the least effective of the six pitcher, who picked up the win in only his fourth major league appearance. The Houston Astros had previously used 6 pitchers to throw a no-hitter, also in an interleague game, in 2003.