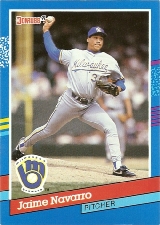 Pitcher Jaime Navarro was signed by the Milwaukee Brewers and scout Julio Blanco-Herrera as a 3rd round pick in the 1987 amateur draft.

Navarro is the son of pitcher Julio Navarro. They were the first father-son duo to each record official MLB saves. Unlike his father, however, Jaime was primarily a starting pitcher (just 14% of his big-league appearances came in relief, with two saves). He was a very promising young starter who peaked with 17 wins for the Brewers in 1992. He also had back-to-back good years with the Chicago Cubs in 1995 and 1996, but his fortunes changed for the worse after he went across town to the Chicago White Sox as a free agent. From 1997 through 1999, he somehow managed to remain a rotation regular, even though his performance was distinctly subpar.

Navarro's last big-league season was 2000. He was traded back to the Brewers, who released him after a start that was worse yet. The Colorado Rockies had him in their organization for about a month, then the Cleveland Indians gave him a final chance. During his career he led his league in a number of categories, although most of them were not positive: he led the National League in hits allowed in 1996 and the American League in the same category in 1997; he gave up the most earned runs in the AL in 1993 and 1997; and he led the circuit in wild pitches in 1997 and 1998. The only positive category was the most batters faced in NL in 1996.

After leaving the majors, Navarro pitched for the Newark Bears in the independent Atlantic League in 2001 and 2003. In 2003, he was also briefly in Mexico and with the Louisville Bats, the Triple-A farm club of the Cincinnati Reds. Navarro then played for three years in Italy with BBC Grosseto.

Navarro was the pitching coach for the Wisconsin Timber Rattlers in 2008, High Desert Mavericks in 2009 and Tacoma Rainiers in 2010. In 2011 he moved up to the major leagues as bullpen coach of the Seattle Mariners. He moved back to Tacoma in 2014-2015.