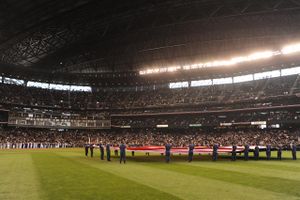 The 2010 Seattle Mariners went into the season confident that they could compete for the American League West title, on the strength of a solid performance by their pitching staff in 2009, and of two trades that strengthened the team without giving up any players who had been expected to contribute at the major league level. On December 16, they obtained former American League Cy Young Award winner Cliff Lee, fresh off a tremendous post-season performance with the Philadelphia Phillies; the price to obtain him was three top prospects - P Phillippe Aumont and OF J.C. Ramirez and Tyson Gillies - none of whom was expected to contribute much this season. Then, on December 18, the Mariners obtained troubled OF Milton Bradley from the Chicago Cubs in return for non-performing P Carlos Silva. Bradley had an excellent season for the Texas Rangers in 2008 and was counted on to thrive after leaving the hostile environment of Chicago.

In other off-season moves, the Mariners also signed free agent Chone Figgins to play 3B and bat lead-off; he would replace Adrian Beltre, who had left for the Boston Red Sox as a free agent. Another minor trade, which sent talented but under-performing reliever Brandon Morrow to the Toronto Blue Jays for Brandon League, a player with a similar profile. However, the Jays turned Morrow into a successful starter, while League pitched decently, but in low-leverage situations out of the bullpen. Meanwhile, Silva became the most effective starting pitcher on the Cubs' staff, while Seattle's own starting pitchers generally struggled.

The season's beginning did not go as planned, however. Lee suffered an abdominal strain in spring training and did not pitch until the beginning of May. By that time, the offense was in serious trouble. Neither of the team's two aging designated hitters, Ken Griffey, Jr. and Mike Sweeney, was contributing at all with the bat, while every other hitter was seemingly in a slump. Back-up OF Eric Byrnes left the team in early May after failing to execute a squeeze bunt and costing Lee a potential first win; he was batting .094 at the time and announced his retirement. Two days later, Bradley left a game after a temper tantrum following a strikeout; he was placed on indefinite leave so he could undergo psychological counseling. That same week, it was revealed that Griffey had failed to appear as a pinch-hitter during a game because he was asleep in the clubhouse. Grumblings that it was time for the mariner icon to retire became louder. On May 9, the M's fired hitting coach Alan Cockrell and replaced him with AAA hitting instructor Alonzo Powell; the team was hitting .225 at the time, with 10 home runs - one less than American League leader Paul Konerko.

After that low point, the ship began to right itself slightly. Lee won his first game on May 11, then on May 19, Bradley was removed from the restricted list, banging out two hits in his first game back. On June 2, Griffey acknowledged the inevitable and announced his retirement; he was hitting .184 with no homers at the time.

Just before the All-Star break, as it was clear the season was lost, the team traded Cliff Lee to the the Texas Rangers in return for prospects, most notably 1B Justin Smoak. Lee had been named to the All-Star team already, but played in the game with a Rangers uniform. However, the constant losing returned and on July 23, there was another flare-up in the dugout, this time when Figgins was removed from a game for a lack of hustle and almost came to blows with manager Don Wakamatsu. Significantly, General manager Jack Zduriencik dd not condemn Figgins' actions or issue any public support for his manager.

On August 9, with the Mariners in last place in the AL West with a record of 42-70, manager Wakamatsu was fired, along with bench coach Ty Van Burkleo, pitching coach Rick Adair and performance coach Steve Hecht. Daren Brown was promoted from the Tacoma Rainiers of the Pacific Coast League to finish the season as the interim manager. The two vacant coaching positions were taken over by minor league catching instructor Roger Hansen, who became bench coach, and minor league pitching coordinator Carl Willis, who was named the pitching coach.