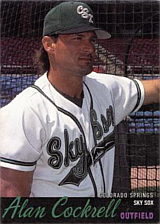 Once a top 10 draft pick, Alan Cockrell kicked around the minor leagues for thirteen seasons before enjoying his moment in the sun, batting .250 in 9 games with the 1996 Colorado Rockies. A former starting quarterback with the Tennessee Volunteers, Cockrell retired soon after, spending many years as a coach in the Rockie farm system, largely with the Colorado Springs Sky Sox. He was the Rockies hitting coach for part of 2002, when Clint Hurdle was promoted to manager, and returned to that role in 2007. Cockrell was a scout for the Rockies in 1998, then managed the Portland Rockies (1999) and Salem Avalanche (2000). He was the Rockies' roving hitting coordinator in 2001-2002 and a coach for the Sky Sox from 2003 to 2006.

He was named hitting coach of the Seattle Mariners in 2009 but was fired on May 9, 2010 with the team's offense in the doldrums. The team was hitting .225 at the time, with only 10 home runs; as a point of comparison, American League home run leader Paul Konerko had already collected 11 by himself at that point. He was replaced by AAA hitting instructor Alonzo Powell. In 2011, Cockrell became the Arizona Diamondbacks minor league hitting coordinator, a position he retained in 2012. In 2015, he was named assistant hitting coach of the New York Yankees, then in 2016 was promoted to hitting coach, a position he also held in 2017.