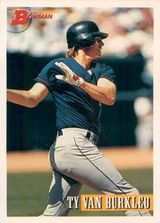 First baseman Ty Van Burkleo played in Japan and then briefly in the majors. More recently, he has been a member of several big league coaching staffs.

Originally signed as a non-drafted free agent by the Milwaukee Brewers in 1981, Van Burkleo made his pro debut with the Beloit Brewers in 1982 and hit 22 home runs for the club that year. Released by Milwaukee in 1984, he soon caught on with the California Angels organization, who in turn let him go in 1987 after only reaching the AA level.

Van Burkleo went to Japan and joined the Seibu Lions in 1988. In his first year with the club, he hit .268 with 38 homers and 90 RBIs. He spent two more years with Seibu and one with the Hiroshima Carp, hitting just 17 home runs in his last three seasons in Japan, while peaking at .210 in average during that stretch. He was famous enough in Japan that novelist T.C. Boyle included his name as one of the "gaijins" idolized by his Japanese protagonist in the novel East Is East; the novel was published in 1990, which certainly makes Van Burkleo the only major leaguer whose name was ever included in a major work of fiction before he made his major league debut!

Van Burkleo was re-signed by the Angels in early 1992 and hit .273 with 19 homers for the AAA Edmonton Trappers that summer. He spent the majority of 1993 with the Vancouver Canadians and played a dozen games in the majors with California, hitting .152. On August 16th, he hit his only big league home run, a solo shot off Bill Gullickson of the Detroit Tigers. He moved on to the Colorado Rockies chain in 1994, spending most of the summer with the Colorado Springs Sky Sox and appearing in a pair of games in the majors. Following one more year in the Rockies system, he ended his career with a third stint in the Angels organization in 1996, serving as a player-coach for the Lake Elsinore Storm.

Van Burkleo was a full-time coach in the Arizona Diamondbacks minor league system from 1997 to 2000, including the Lethbridge Black Diamonds in 1997, High Desert Mavericks in 1998 and the El Paso Diablos in 1999-2000. He then spent 2001 to 2006 as a roving hitting instructor for the Angels. He was the Oakland A's hitting coach in 2007 and 2008 and the Seattle Mariners' bench coach in 2009 and 2010. In 2011, he became the Houston Astros' minor league hitting coordinator, and on August 19, 2012, he was promoted to hitting coach of the major league Astros after manager Brad Mills and two of his coaches were fired, but he was not retained the following season. Instead, he moved to the Cleveland Indians as hitting coach in 2013, ironically re-joining Mills who was named third base coach in the same staff. He and Mills elected to sit out the 2020 season due to the Coronavirus pandemic.