Home of the Seattle Mariners, 1999 to present

T-Mobile Park has been the home of the Seattle Mariners since they moved from the since-demolished Kingdome in the middle of the 1999 season.

The King County Council began seeking a new ballpark for the Mariners in 1994, since many people felt the Kingdome was one of the worst ballparks in the major leagues, a feeling justified by the fact that the acoustic tiles fell from its roof in mid-July and forced the Mariners to play all their games on the road until the 1994 strike brought the season to an untimely end. They recommended that a new ballpark be built with combined public and private financing from the county. In the midst of the Mariners' dramatic pennant chase of 1995, county voters rejected an increase in sales taxes by 0.1 percent to pay for a new ballpark. A month later - and with the Mariners continuing to threaten to move to St. Petersburg, FL without a new stadium - the council passed a different taxation package without a public vote. Ground broke on the ballpark in March of 1997. The ballpark was known as Safeco Field from the time of its opening until the end of the 2018 season.

Perhaps T-Mobile Park's most unique trait is its retractable roof. Among ballparks with retractable roofs, only T-Mobile Park's doesn't completely enclose the stadium. So, while fans are protected from the rain, they are still seated in the open air. $1.3 million dollars' worth of public art is scattered throughout the ballpark, including a glass mobile of bats in the main home plate entrance and a display of major league teams' logos made out of license plates and soda cans.

T-Mobile Park is considered a pitchers' park, although it is slightly easier to hit a home run to right field than to left (a design quirk made as a nod to Ken Griffey Jr.'s power). Dimensions are 331' to left field, 390' to left-center, 409' to dead center, 387' to right-center, and 327' to right field. A hand-operated scoreboard makes up the left-field wall, which is 16 feet tall, twice as tall as the rest of the outfield wall. 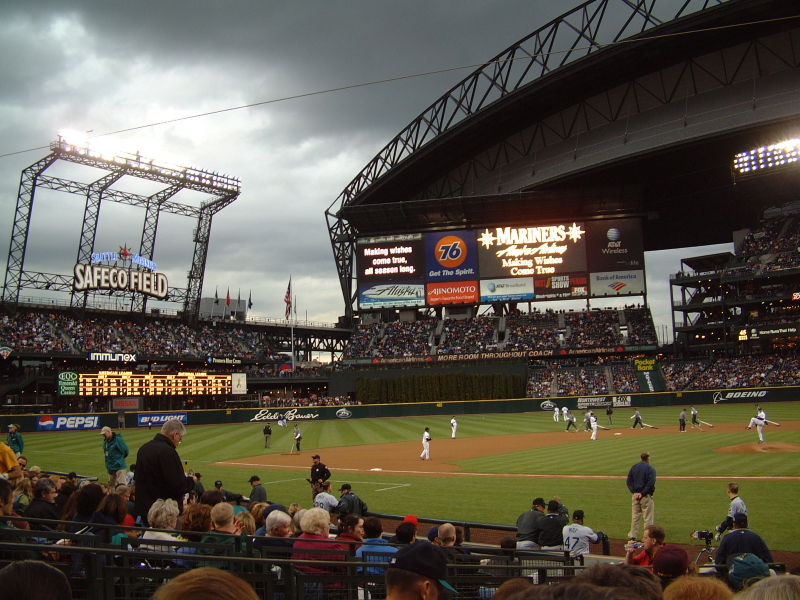 The San Diego Padres faced the Mariners in the inaugural Safeco Field game on July 15, 1999. Jamie Moyer threw the first pitch - a called strike to Quilvio Veras. Interestingly, it was an interleague game - the first time a ballpark had been inaugurated with such a game. The Padres' Eric Owens had the first hit, and the Padres won the game 3-2. Two days later, the ballpark saw its first home run (the Mariners' Russ Davis), first grand slam (the Mariners' Raul Ibanez), and first Mariners win (9-1).

The ballpark has hosted playoff series twice, as the Mariners made it as far as the American League Championship Series in 2000 and 2001. It also hosted the 2001 All-Star Game, perhaps best remembered for Cal Ripken Jr.'s home run. Rafael Palmeiro reached 3,000 career hits with a double off the Mariners' Joel Pineiro at Safeco Field on July 15, 2005. Under its new name, it is slated to host the All-Star Game again in 2023.

In 2015, Safeco Field became the first major league ballpark to be equipped with energy-saving LED lights to illuminate the playing field. The lights were expected to reduce energy by 60 to 70%. On May 23, 2018, the Mariners signed another 25-year lease on the facility, set to come into effect at the expiration of the original twenty-year lease at the end of the season. That new lease ushered in a change of name, as the Mariners reached a deal with mobile telephony provider T-Mobile for naming rights. The ballpark was thus re-christened T-Mobile Park for the 2019 season.

In 2024, it will host the NHL Winter Classic, an outdoor hockey game featuring the Seattle Kraken and the Vegas Golden Knights.