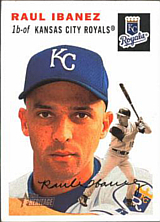 Raúl Ibáñez, after a long career in the American League, dominated the National League in his first half of the 2009 season with the Philadelphia Phillies. On May 29th, he led the league in slugging, total bases, and RBI. He made the All-Star team for the only time of his career that season.

Ibáñez was born in New York, NY but went to high school in Miami, FL. He began his minor league career at age 20 after playing in the Miami Dade College system. Starting in 1992, he had a lengthy minor league career in the Seattle Mariners organization, playing more games each year in the minors than in the majors until 1999. He was primarily a catcher in the 1993-1995 seasons, then moved to the outfield.

Raúl hit over .300 several times in the minors, including a peak in 1995 with Riverside when he hit .332 with 20 home runs. From 1996 to 2000, he spent at least part of each season at Tacoma. On August 19, 1997 Ibáñez became the first Tacoma Rainier to hit for the cycle, doing so against the Albuquerque Dukes. He hit two home runs and accumulated seven RBI in that particular game, an 11-4 victory. [1]

He became a free agent after the 2000 season, signing with the Kansas City Royals, and was a free agent again after the 2003 season, returning to the Mariners. After the 2008 season, yet again a free agent, he finally moved to the National League for a contract estimated at $30 million over three years. In joining the Philadelphia Phillies he reunited with former teammate Jamie Moyer and former Mariners GM Pat Gillick, both now with the Phils. While by no means a good defensive outfielder, Ibáñez always managed to keep out of being typecast as a designated hitter; in Philadelphia, he replaced the equally defensively-challenged Pat Burrell in left field, and was helped by the presence of two excellent defensive players in Shane Victorino and Jayson Werth.

With the Phillies having a number of promising young outfielders in their system, such as John Mayberry and Domonic Brown, they showed little interest in re-signing him for 2012. Indeed, there was little demand for his services, given his age and declining numbers, and he waited until spring training was already under way to land a job with the New York Yankees on February 20th. The Bronx Bombers were looking for him to be their left-handed DH in 2012, replacing the recently retired Jorge Posada. Plans changed when starting LF Brett Gardner was lost for most of the season, and Ibanez got to start in left field against most right-handers, in addition to playing some DH and RF when 1B Mark Teixeira missed some playing time and Nick Swisher moved over to first base. He hit one of the biggest home runs of the Yankees' season on October 2nd, in the 12th inning of the team's penultimate game. With the Yankees down to a half-game lead over the surprising Baltimore Orioles, who had won earlier that day, Ibanez hit a solo homer off the Boston Red Sox's Andrew Miller to give New York a 4-3 win. He finished the season with a .240 average in 130 games, with 19 homers and 62 RBI. He had another tremendous performance against the Baltimore Orioles in Game 3 of the ALDS on October 10th. Manager Joe Girardi made a bold move by inserting him into the game as a pinch-hitter for struggling superstar Alex Rodriguez in the bottom of the 9th, and he delivered lightning twice, homering against closer Jim Johnson to tie the game, and then repeating the feat in the 12th off Brian Matusz to give the Yankees a walk-off 3-2 win. He continued to build his legend in Game 1 of the ALCS on October 13th, when he homered off Jose Valverde of the Detroit Tigers to cap a four-run 9th-inning rally that evened the score at 4-all; however, the Tigers managed to overcome that to win the game in 12 innings, 6-4. His three ninth-inning-or-later homers in one postseason were a first in baseball history.

On December 22, 2012, Ibanez signed as a free agent with the Seattle Mariners, returning to the team for a third stint. On May 15, 2013, he had one of the best games of his career in returning to New Yankee Stadium, hitting a pair of homers and driving in 6 runs in leading the Mariners to a 12-2 thumping of the Yankees; the first homer was a grand slam that was part of a seven-run 1st inning that put the game away before the Yankees even had a chance to bat. When he hit his 20th homer of the season, he became the oldest player to hit 20 home runs prior to the All-Star break. He finished the season with a .242 batting average, but 20 doubles and 29 homers, good for an OPS+ of 123 in the unfriendly hitting environment of Safeco Field. His 29 homers tied a record set by Ted Williams for most homers in a season by a player in his 40s. On December 27th, he moved again, this time joining the Los Angeles Angels of Anaheim on a one-year, incentive-laden contract. He had always hit well against the Angels, especially at Anaheim Stadium, and the team was looking for him to be their main DH in 2014. However, he hit only .157 in 57 games, with 3 homers and 21 RBI, and was given his release on June 21st; a week later, he signed with the Kansas City Royals. When he connected for his first homer with the Royals on July 2nd, he became at 42 the oldest player in team history to hit a home run. It was a final hurrah, however. he hit .188 in 33 games for Kansas City but did end his career on a high note as he accompanied his younger teammates who made it all the way to the 7th game of the World Series before bowing to the San Francisco Giants; he was not on the postseason roster.

He announced his retirement after the season, putting an end to a career that had lasted 19 seasons in which he had hit .272 with 305 homers and 1207 RBI in 2,161 games. He is one of the all-time top sluggers among major leaguers whose last names begin with "I", along with Pete Incaviglia. In 2016, he joined the front office of the Los Angeles Dodgers as a special assistant to President of Baseball Operations Andrew Friedman. He became eligible for the Hall of Fame in its 2020 election but received only a single vote and was dropped from the ballot.