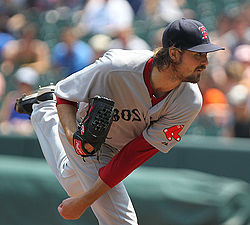 The nephew of former NFL player Dan Miller, Andrew Miller was taken in the third round of the 2003 amateur draft by the Tampa Bay Devil Rays but did not sign. In his freshman year of college, Miller went 6-3 with a 2.98 ERA, third in the Atlantic Coast Conference. Baseball America named him to their all-freshman team, second string. In 2005, Miller went 8-4 with a 2.98 ERA. He was 6-0 with a 1.65 ERA and .133 opponent average in the Cape Cod League that summer for the Chatham Athletics and was named the Baseball America Summer Baseball Player of the Year. The publication also ranked him as the top prospect in the Cape Cod League. He ranked 8th in ERA and made the League All-Star team as well as splitting Outstanding Pitcher honors with Tim Norton.

The next year, Andrew did even better. He went 13-2 with a 2.48 ERA and set a school record with 133 strikeouts. He made at least four All-American team lists, won the Roger Clemens Award, was a semifinalist for other major collegiate awards and was named "Baseball America Player of the Year" as the top college baseball player.

He was selected by the Detroit Tigers in the first round of the 2006 amateur draft. He only pitched three minor league games, throwing five scoreless innings for the Lakeland Tigers, with nine strikeouts, one walk and two hits allowed, and then was called up to Detroit after one of the shortest farm tenures in recent history. Miller was 0-1 with a 6.10 ERA in eight games for the 2006 Detroit Tigers.

He was part of a major deal in December of 2007. He was sent with Cameron Maybin, Eulogio De La Cruz, Dallas Trahern, Mike Rabelo and Burke Badenhop from the Detroit Tigers to the Florida Marlins for Miguel Cabrera and Dontrelle Willis.

Miller spend parts of each of the next three seasons with the Marlins, bouncing between minor league levels when not with the big league club. His results were not good, totaling a 10-20 record with a 5.89 ERA over 58 games (41starts). The major issue for Miller was control, averaging over 5 walks per 9 IP.

In November of 2010 Miller was traded by the Florida Marlins to the Boston Red Sox for Dustin Richardson. Miller went 6-3 with a 5.54 ERA covering 65 innings for the Red Sox in 2011, mainly as a starter. In 2012 the Red Sox moved Miller to the bullpen and he found better success, appearing in 53 games while going 3-2 with a 3.35 ERA. Miller continued strong into 2013 until derailed in July with a foot injury. He went 1-2 with a 2.64 ERA in 37 games but missed the second half of the season and the postseason, including his teammates' successful run at a World Series title. He was back with the Sox in 2014 and pitched very well, putting up a 2.34 ERA in 50 games. However, when the Red Sox underwent a complete roster make-over at the trading deadline, shedding veterans left and right, he was sent to the Baltimore Orioles on July 31st in return for AA pitcher Eduardo Rodriguez. He pitched very well for Baltimore, going 2-0, 1.35 in 23 games, allowing only 8 hits and 4 walks in 20 innings while striking out 34; he also recorded his first career save. Overall for the year, he was 5-5, 2.02 in 73 outings. He pitched in the postseason for the first time, and did not allow a run in 7 1/3 innings over 5 appearances, only giving up a hit and a walk while striking out 8.

After his dominating 2014 season, Miller became one of the most sought-after free agents of the off-season. On December 5th, he signed a four-year deal for $36 million with the New York Yankees, a record for a middle reliever. However, only three days later, incumbent Yankees closer David Robertson moved to the Chicago White Sox as a free agent, leading to immediate speculation that Miller would not be a set-up man deluxe, but potentially the team's new closer, although the young Dellin Betances, coming off a tremendous rookie season, was also in the running for the job. Heading into spring training in 2015, manager Joe Girardi hinted that he was leaning towards sharing the role between the two pitchers. In fact, though, Miller pitched very well in the early going, and when he recorded his 13th save on May 8th, Girardi announced that he was in fact his full-time closer, with Betances also doing very well as his set-up man. In fact neither pitcher had allowed an earned run by that point, and the Yankees were in first place in the AL East as a result. He was placed on the disabled list on June 10th with a strained forearm muscle and came back a month later, on July 8th, without skipping a beat. He ended the season with a 3-2 record, 36 saves and a 2..04 ERA and was named the winner of the Mariano Rivera Award as the top relief pitcher in the American League.

Before the 2016 season, the Yankees bolstered their bullpen even further by acquiring Aroldis Chapman in a trade with the Cincinnati Reds. GM Brian Cashman indicated that Chapman would be the closer, although he first had to serve a thirty-game suspension from the start of the season as punishment for an off-season domestic violence incident, meaning Miller was slated to be the closer for the that period at least. However, just as spring training was winding down, he suffered a chip fracture in the wrist in his non-pitching arm when struck by a ball in a Grapefruit League game on March 30th. His plan was not to take any time off and to work around the injury. Miller began the year as the Yankees' closer, then ceded the job to Chapman when he returned to action as slated, but the change of role did not affect him. In 44 games through the end of July, he was 6-1, 1.39 with 9 saves and 77 K's in 45 1/3 innings. By then it had become clear that having three of the best late-game relievers on the planet in the same bullpen was not a brilliant strategy by the Yankees that would have them tame into submission any opponent that could not take an early lead, but instead was simply a case of overkill when the line-up featured a number of holes and aging players.

GM Brian Cashman saw the writing on the wall in late July and in the span of a few days traded first Chapman, then Miller, both deals netting the Yankees four young players. In Miller's case, he was sent to the Cleveland Indians on July 31st in return for OF Clint Frazier and Ps J.P. Feyereisen, Ben Heller and Justus Sheffield. The Indians were in first place and already had an excellent closer in Cody Allen when they acquired Miller, but they were really looking at the postseason.As manager Terry Francona explained when asked why he needed another closer: "I have a plan". He went 4-0 with a 1.55 ERA and 3 saves in 26 regular season games for Cleveland, but then took over as the team's pitching star during the postseason - a rare event for a middle reliever. He won Game 1 of the ALDS against the Red Sox when he took over for Trevor Bauer in the 4th inning and went two scoreless innings, and again pitched two scoreless innings in Game 3 as the Indians completed a sweep. In the first two games of the ALCS against the Blue Jays, wins by scores of 2-0 and 2-1 respectively, he struck out 10 of 12 batters he faced in bridging the gap between Cleveland's starter and Allen. He was named the MVP of the ALCS after pitching 7 2/3 scoreless innings in the series, all in key situations. Francona continued to rely on him very heavily in the World Series against the Chicago Cubs, and he responded with solid outings in Games 1, 3 and 4, all Cleveland wins, including getting credit for the win in Game 3, but allowing his first run of the postseason in his Game 5 outing. In the decisive Game 7 on November 2nd, he replaced Corey Kluber in the 5th with Cleveland trailing, 4-1, but gave up a run in that inning and a solo homer to David Ross in the 6th before handing the ball over to Allen with one out in the 7th, but Cleveland was trailing 6-3 at that point and seemingly out for the count. The Indians did mount a remarkable comeback in the 8th, forcing extra innings, before losing in the 10th and falling agonizingly short of their first title since 1948.

In 2017, he continued to represent a key part of a tremendous bullpen for Cleveland, alongside Allen and Bryan Shaw. After a dominant first half, he was named to the All-Star team for the second time, even if he was mainly used as a set-up man for Allen. On August 1st, in a rare bad outing, he gave up a bases-loaded double to Eduardo Nunez of the Red Sox in the 6th to be charged with a blown save. The following day, he was placed on the disabled list with knee tendinitis, which explained why his usually outstanding control had been off, as he had issued 10 batters in his last 21 innings. He was reactivated on August 18th. He finished the season at 4-3, 1.44 in 57 games, with 2 saves and 95 strikeouts in 62 2/3 innings. In the postseason, however, he was charged with a loss in Game 3 of the Division Series against the Yankees on October 8th. He relieved Carlos Carrasco with two outs in the 6th and the game still scoreless and the bases loaded. He got Starlin Castro to pop up to end the inning, but in the 7th, he allowed a lead-off homer to Greg Bird which turned out to be only run of the game. The Indians were upset by the young Yankees in five games, while he did not give up a run in his three other appearances that fall.

Miller made a couple of sojourns on the disabled list in the early days of the 2018 season, a first one from April 26-May 11 because of a sore hamstring, and a second one starting on May 26th with inflammation in his right knee. He had started off strong, with 10 scoreless outings, but had been 0-3, 14.55 since his return from his first stint on the DL. He finished the season at 2-4, 4.24 in 37 games, with 2 saves, his underwhelming numbers contributing to an overall terrible collective performance by the Indians' bullpen which constituted the team's Achilles' heel that season. In the postseason, he pitched just one third of an inning in the Division Series, but it was spread over two eventful outings. In Game 2 against the Houston Astros on October 6th, he came in in the bottom of the 6th in relief of Carlos Carrasco with Cleveland leading 1-0 but two on with one out. He immediately gave up a two-run double to Marwin Gonzalez and then followed that with a walk, a wild pitch and an intentional walk that loaded the bases before turning the ball over to Trevor Bauer who retired the next two batters. However, the dam,age had been done, as Cleveland lost the game, 3-1. In Game 3, he managed to stop the bleeding after Bauer had turned a 2-1 lead in the 7th into a 4-2 deficit while putting two runners in scoring position. He got Josh Reddick to hit a short fly ball for the second out but then walked Carlos Correa before Cody Allen came in to record the final out. Once again, the Indians could not come back and went on to lose the game and the series.

Miller became a free agent again after the 2018 season and on December 21 signed a two-year contract with the St. Louis Cardinals for $25 million. He announced his retirement in March of 2022. He had just finished being one of the main player representatives to negotiate a settlement to the 2021-2022 lockout.