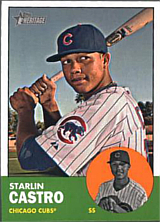 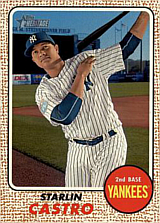 Starlin Castro is a four-time All-Star infielder, best known for his work with the Chicago Cubs. Entering his age 30 season, he has already amassed 1,617 hits, becoming the youngest man to lead the National League in hits in 2011. He had one of the most notable MLB debut games ever, establishing the record for RBI in an MLB debut.

Starlin was signed by scout Jose Serra for the Cubs in October 2006. In 2007, he hit .299/.371/.371 for the DSL Cubs with 13 steals in 15 tries and 47 runs scored in 60 games. The next year, he batted .311/.364/.464 for the AZL Cubs while splitting time between second base and shortstop; Baseball America rated him the 14th best prospect in the Arizona League and 7th best Cubs prospect. Castro hit .302/.340/.391 with 22 steals in 33 tries for the 2009 Daytona Cubs and .288/.347/.396 in 31 games for the Tennessee Smokies. He finished third in the Florida State League in average, behind Logan Schafer and Ben Revere, and was named the FSL All-Star shortstop. He was rated the league's 6th best prospect by Baseball America, between Kyle Drabek and Jenrry Mejia. He played in the 2009 Futures Game, backing up Wilmer Flores at second base for the World team. In his lone at-bat, he singled off Trevor Reckling and scored on a hit by Alcides Escobar. In 2010, he started the year with the AA Tennessee Smokies and tore up the Southern League (.376/.421/.569, 20 runs scored, 20 RBI in 26 games) before being called up to Chicago on May 7.

His major league debut was a memorable one. Playing the Cincinnati Reds, he hit a three-run homer off Homer Bailey in his first at bat, then added a bases-loaded triple as the Cubs defeated the Reds, 14-7. At 20, he was the youngest shortstop in Cubs history, the first player born in the 1990s to play in the major leagues, and only the 6th player to homer in his first major league at-bat for the team; the last had been pitcher Jim Bullinger in 1992. Even more remarkably, his 6 RBI were an all-time record; a number of players had driven in five runs in their major league debut, most recently Ben Grieve in 1997, but none had ever had 6. While he had been considered Chicago's top prospect, the power display was a surprise as he had homered 9 times in 995 minor league at bats. His Wrigley Field debut on May 10 was less of a fairy tale: he committed three errors in a 4-2 loss to the Florida Marlins and was booed by his hometown fans. He settled in nicely as the Cubs' regular shortstop and was still hitting over .300 in mid-August. He finished the season hitting an even .300/.345/.408 in 125 games. His ability to hold his own in the majors at such a young age made him one of the most promising rookies of the year and earned him a spot on the 2010 Topps All-Star Rookie Team.

Castro was the Cubs' starting shortstop in 2011 and one of the few bright spots on a team that under-performed significantly. He was named to the 2011 All-Star Game as the Cubs' sole representative. However, he also got in trouble with manager Mike Quade for his sometimes lackadaisical play. The last straw came on August 21st, when he was goofing around with his back to the plate when James Russell delivered a 6th-inning pitch against the St. Louis Cardinals. Quade benched his young star the next day and had him apologize to his teammates. Castro vowed "it would never happen again". He finished the season with 207 hits, the most in the National League, and also led the circuit in at bats and singles while batting .307/.341/.432. After the season, Chicago police announced they were investigating charges of sexual assault filed against Castro, but dropped the case in April after finding insufficient evidence. He got into more trouble with a manager in 2012, this time rubbing new skipper Dale Sveum the wrong way. A key incident occurred on June 4th, when he forgot how many outs there were in the 5th inning and started to jog off the field after receiving a toss from second baseman Darwin Barney, never attempting to complete a double play that would have got the Cubs out of the inning. The San Francisco Giants took advantage of the blunder to tie the game, which they eventually won, 3-2. Sveum was furious after the game calling the play "the last straw". "These things have got to stop happening," he added, "or we're just going to stop playing him. It's something obviously that's unacceptable at any time." All of that frustration seemed to be forgotten by the end of August, when the Cubs announced they had signed their young star to a seven-year extension worth $60 million; the deal also included an option for 2020, making Castro a cornerstone of future Cubs teams. GM Jed Hoyer explained that Starlin was a special talent, having established himself as a major leaguer at 20, and a reliable veteran at the tender age of 22, adding "He's one of the players we're building around." On September 7th, he collected the 500th hit of his career, becoming only the 28th player in major league history to do so before the age of 23, and the first since Alex Rodriguez. Starlin played all 162 of the Cubs' games, leading the NL with 646 at bats. He collected 183 hits, scored 78 runs and drove in as many, while amassing 29 doubles, 12 homers and 14 triples. His line fell to .283/.323/.430 and while he stole 25 bases, he was caught a league-leading 13 times.

In 2013, he had his first poor season as the Cubs continued to struggle on the field, falling to last place following the departure of the Houston Astros from the NL Central. While Castro continued to play everyday (161 games) and again led the NL in at-bats, he hit only .245/.284/.347. He continued to hit doubles (34), but only had 2 triples and 10 homers. As a result, he scored only 59 runs and drove in 44, while his OPS+ was a poor 72, his first season below 100. Following the season, he became locked in a legal dispute with the baseball academy which had nurtured him in the Dominican Republic. The "Mi Futuro Biliguer" Academy had $3.7 million seized from Castro's bank account, claiming that when he was 15 years old, his father had enrolled him with the promise that he would return 3% of his son's future major league earnings to the school. Castro had made payments to the school in the past, but stated that he did not consider himself bound in perpetuity. He had a nice bounce-back season in 2014, returning to the All-Star Game after missing out the previous season. The Cubs started the season struggling, but the excitement returned as they started promoting some of their top minor league prospects to the majors, creating excitement among the public at Wrigley Field. Castro was one of the few veterans around which the Cubs wanted to build, although he was also feeling the pressure of the coming wave, as two of the young prospects ready to help the big league club were natural shortstops: Javier Báez and Addison Russell. At first, Báez played second base after being called up, with Castro keeping his shortstop job, but on September 2nd, Starlin sprained his ankle sliding into home plate, ending his season. He hit .292/.339/.438 in 134 games, with 33 doubles and 14 home runs. He had been moved from the lead-off spot to a slot in the middle of the lineup, and as a result saw his runs scored go down to 58 but his RBI increase to 65, while his OPS+ was his highest yet at 113.

On December 27, 2014, Castro was questioned by police following a shooting at a nightclub in his hometown of Monte Cristi. Castro explained through his agent that he was present but not involved in any way. He played 151 games for the suddenly competitive Cubs in 2015, starting the season at shortstop and eventually moving over to second base as rookie Addison Russell took over. Starlin hit .265/.296/.375 with 23 doubles and 11 homers, scored 52 runs and drove in 59 as his OPS+ fell to 83. At 25, he was one of the most experienced position players on a very young Cubs team. In the first taste of postseason of his career, he went 0-for-4 against the Pittsburgh Pirates in the Wild Card Game, then hit .286 (4-for-14) as the Cubs surprised the St. Louis Cardinals in the Division Series. He was only 2-for-16 when they were eliminated by the New York Mets in the NLCS. On December 8th, the Cubs signed free agent Ben Zobrist to a large contract, and to open up the starting second base job, traded Castro to the New York Yankees for pitcher Adam Warren and a player to be named (Brendan Ryan).

On May 29, 2016, Starlin got the Yankees' only hit of the game as they faced the Tampa Bay Rays and Jake Odorizzi. It was a two-run homer in the 7th inning, and it was enough to give New York a 2-1 victory, the first time the Yankees won a game with only one hit since 1914, and in that case it had been in a game cut short to six innings by darkness. He played 151 games in his first season in New York, hitting .270/.300/.433 with 21 homers and 70 RBI, also scoring 63 runs. He followed that with perhaps his best all-around season in 2017, as he returned to the All-Star Game for the fourth time and hit .300/.338/.454 with 16 homers and 63 RBI in 112 games. He missed time with two stays on the DL, including a hamstring strain between June and August which caused him to miss the All-Star Game. He was one of the veteran leaders on a team nicknamed the "Baby Bombers" because of the contributions of young sluggers such as Aaron Judge and Gary Sanchez, although Castro often batted fourth or fifth in that powerful lineup. After being shut out in the Wild Card Game, he went 6-for-22 with a pair of doubles as the Yankees upset the Cleveland Indians in the Division Series, and 5-for-24 in his team's closely-fought loss to the Houston Astros in the ALCS.

On December 11, 2017, Castro was the only veteran among three players the Yankees sent to the Miami Marlins to land outfielder Giancarlo Stanton. With the Marlins in the midst of their semiannual fire sale, it was not clear if Starlin would still be with the team when the 2018 season opened. He did start the year at second base for the team, even though it was clear that he was not happy to be thrown in the midst of a young team undergoing their nine zillionth complete reconstruction. On April 13th, he accomplished a very rare feat: clearing the bases on a sacrifice fly. In the 5th inning of a game against the Pittsburgh Pirates, Castro lifted an apparently harmless fly ball to right field with the bases loaded against Chad Kuhl. Pitcher Dillon Peters, who was on third, tagged up and scored easily as right fielder Gregory Polanco's throw was off line. That is when the fun began, as the other two runners also tagged up. Pirates catcher Elias Diaz attempted to cut off Miguel Rojas, who was heading for second base, but his throw sailed deep into center field allowing both Derek Dietrich, who had originally been on second, and Rojas, to round the bases as it took center fielder Starling Marte a while to recover the errant throw. The Marlins won the game, 7-2, in large part thanks to that unusual play. Castro hit .278/.329/.400 in 154 games for the last-place team, adding 12 homers and 54 RBI. In 2019, he played all 162 games for Miami, belting 22 homers with 86 RBI to go with a .270/.300/.436 average, but his OPS+ was actually lower than the previous year, falling from 102 to 94, largely due to a drastic fall in his free passes, from 48 to 28.

After two years off the radar in Miami, Castro became a free agent. On January 7, 2020, he signed a two-year contract with the Washington Nationals. The defending World Series champs had seen third baseman Anthony Rendon depart in free agency, and were already looking to upgrade their infield defensively after making do with Howie Kendrick and Brian Dozier at second base during the previous season.