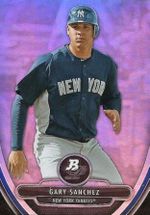 Gary Sanchez was the last of 254 players to make his major league debut in 2015 when on the penultimate day of the season, October 3rd, he was used by the New York Yankees as a pinch-hitter for 1B Greg Bird in the 9th inning of a 9-2 loss to the Baltimore Orioles; he popped out to 3B Manny Machado. The following day, he struck out against Chris Britton, also in the 9th inning, as the Yankees lost, 9-4. He did not get to play the field at all. In the postseason, another player made his debut, Raul Mondesi, who did so in the World Series.

A catcher by trade, Sanchez was signed by the Yankees as an amateur free agent on July 2, 2009. He began his professional career the following season, splitting time between the GCL Yankees and Staten Island Yankees. A solid hitter with excellent power, he slugged 17 homers in 82 games for the Charleston RiverDogs of the South Atlantic League in 2011, and 18 with 29 doubles in 2012 between Charleston and the Tampa Yankees of the Florida State League. In 2013, he hit 27 doubles and 15 homers between Tampa and the Trenton Thunder of the Eastern League. He then spent the entire 2014 season with Trenton, playing 110 games while hitting .274/.330/.485 with 13 homers and 65 RBIs. He confirmed his place as the Yankees' presumptive catcher of the future in 2015 when he hit .274/.330/.485 in 93 games between Trenton and the AAA Scranton/Wilkes-Barre RailRiders, slugging 23 doubles and 18 homers and driving in 62 runs. He was selcted to play for the World team in the 2015 Futures Game. He made his major league debut late that season, going 0 fr 2 in 2 games. On November 11th, the Yankees traded back-up catcher John Ryan Murphy, opening up the position as starter Brian McCann's understudy.

However, it was Austin Romine who ended up backing up McCann at the start of 2016, with Gary spending the first four months of the season in the minors with Scranton/Wilkes-Barre. In 71 games, he hit .282 with 21 doubles and 10 homers and driving in 50 runs. He returned to the Futures Game. He played a one-off game with the Yankees on May 13th, going 0 for 4 as the DH against the Chicago White Sox, but on August 3rd, after the Yankees had made important changes to the team at the trading deadline, he was called up to New York with the aim of giving him significant playing time to show what he was capable of. He obtained his first big league hit that day, a single off Hansel Robles of the New York Mets, after which he scored his first career run as part of going 1 for 4 as the Yankees' starting DH in a 9-5 win over their crosstown rivals. On August 5th, he made his first start behind the plate against the Cleveland Indians and quickly flashed his arm, throwing out Jason Kipnis and Mike Napoli on stolen base attempts in the first couple of innings; he then doubled in the 5th for his first RBI and added another the following inning with a bases-loaded walk. On August 10th, he went 4-for-5 in a 9-4 win over the Boston Red Sox, hitting his first major league homer against Junichi Tazawa in the 8th inning. On August 16th, he homered twice in a 12-6 loss to the Toronto Blue Jays, including a monster three-run shot that reached the second deck in left field. In that game, Jays catcher Russell Martin also homered twice, making it the first time in American League history that the starting catchers for both teams had hit multiple homers. He was on an absolute power surge in his first month, as on August 24th, he hit his 9th homer. He was not only the third player in American League history to have hit that many homers in his first 21 games, but all of his had come in the past 13 games! When he hit his 11th homer on August 27th, he was the fastest in major league history to that total, doing so in 23 career games. He had also exceeded his homer total from his 71 games in AAA. He capped the month by being named both the American League's Player of the Month and Rookie of the Month after hitting .389 with 9 doubles, 11 homers, 20 runs and 21 RBIs. When he hit his 20th homer in his 51st game, he tied Wally Berger for the fewest games ever to reach that mark; that record would stand less than a year, as in 2017, Cody Bellinger hit both his 20th and 21st homers in his 51st game. He finished the season with a .299 average, 12 doubles, 20 homers and 40 RBIs in only 53 games.

Seen by Yankees fans as the second coming of Babe Ruth heading into the 2017 season, he was the opening day catcher on April 2nd against the Tampa Bay Rays. He went 3 for 20 with a homer in his first five games, but on April 8th, hurt his biceps in taking a swing facing Kevin Gausman of the Baltimore Orioles, was taken out of the game immediately and had to be placed on the disabled list. The initial prognosis was that he would miss a month of action. he beat that by a few days, coming back on May 5th. He managed to improve his batting average to .263 by the end of May, although the power was slow to come around at first as he only had 4 homers and 12 RBIs by that point. On June 1st, however, he had his first multi-homer game of the season in a 12-2 win over the Toronto Blue Jays, homering twice off Marco Estrada and driving in three runs. The two long balls gave him 4 homers in 7 career at-bats against Estrada. A week later, on June 8th, he had another two-homer game, this one coming in a 9-1 win over the Boston Red Sox; he had 5 RBIs in that game. June was really his only month that was similar to his rookie season, as he hit .307 with 9 homers and 27 RBIs. In July, he fell back to .231 with 3 homers and also struggled in early August, prompting a brief benching. However, the major concern was his defense, as he seemed to have lost a lot of the agility that characterized his previous season. His 12 passed balls allowed by early August, most in the majors, were a sign of these defensive struggles that made the Yankees brass wonder whether his future was really as a catcher, in spite of his strong arm. However, as he went on a hitting tear shortly thereafter, talk about his defensive shortcomings subsided. In his first 10 games after his temporary benching, he went 13 for 32 (.406) in with 5 homers and 12 RBIs. He received a four-game suspension - which was reduced on appeal to three games - for his participation in a brawl against the Detroit Tigers on August 24th. He was on the bench in that game, but came out to throw a few punches when Miguel Cabrera and Austin Romine came to blows after a brushback pitch. He ended his first full season at .278 in 122 games, with 33 homers and 90 RBIs. He then went 2 for 4 with a double as the Yankees defeated the Minnesota Twins in the Wild Card Game, and 4 fr 23 with 2 homers in their upset win over the Cleveland Indians in the ALDS. In the Yankees' loss to the Houston Astros in the ALCS, he was just 5 for 26 (.192), but with a double and a homer and 5 RBIs. He struggled a bit with control of the strike zone during the postseason, as he drew just one walk while striking out 19 times in 13 games.

He started the 2018 season with good power numbers - 6 doubles and 6 homers in his first 21 games - even if he hit just for a .202 average during that period. On April 26th, he hit the first walk-off homer of his career, driving a fastball from closer Fernando Rodney of the Minnesota Twins into the seats for a three-run homer that gave the Yanks a 4-3 win. On June 24th, he left a game against the Detroit Tigers after straining a groin muscle while unsuccessfully trying to avoid a double play in the 10th inning. He was placed on the disabled list the following day. He was batting just .190 at the time, although he had also hit 14 homers and driven in 41 runs. He was reactivated on July 20th, just after the All-Star break. However, he played just three games before returning to the DL, the last of these giving rise to some controversy on July 23rd as he seemingly failed to hustle on a passed ball, allowing two Tampa Bay Rays runners to score on the play and raising the ire of pitcher Luis Severino. He had apparently re-injured his groin earlier in the game. This being New York, the incident re-ignited speculation about Gary's future as a catcher. This time, he was expected to miss over a month of action. He returned for the month of September, but did not really do much better, as he finished the year at .186 with 18 homers and 53 RBIs in 89 games. He was the starter during the postseason and did hit a double and a pair of homers in the Division Series which the Yankees lost to the Boston Red Sox in 4 games. He then underwent shoulder surgery in November.

Ironically, given his history of injuries, he was one of the few healthy players for the health-challenged Yankees at the start of the 2019 season. On April 7th, he had a great game against the Baltimore Orioles, hitting three two-run homers to lead the team to a 15-3 win. The homers were hit off David Hess, Mike Wright and Dan Straily. He came up again in the 9th against infielder Hanser Alberto, pitching mop-up relief, but missed a chance at a fourth long ball by flying out to left. The win put the Yankees above .500 for the first time that season. However, Sanchez soon joined the injured list himself, as he was placed there on April 12th with a left calf strain. After being activated on April 24th, he hit his first career grand slam on April 27th to power the Yankees to a 6-4 win over the San Francisco Giants. At 467 feet, it was the farthest hit slam since the introduction of Statcast. He hit the 100th homer of his career on August 23rd against the Los Angeles Dodgers, becoming the quickest in American League history to reach the milestone, and the quickest catcher in major league history to do so. His 355 games easily beat the 422 that Mike Piazza had needed to set the mark as a catcher, while Joey Gallo had held the AL mark with 377 games. More injury concerns surfaced on September 12th when he hurt a groin muscle while attempting a stolen base in the 3rd inning of the second game of a doubleheader against the Detroit Tigers, likely putting him on the shelf until just before the start of the postseason. He did start two late games, going a combined 1 for 6, to end the year at .232 with 34 homers - a personal best - and 77 RBIs. He appeared in all of his team's games in the postseason, but only went a combined 4 for 31 (.129) with 1 homer and 16 strikeouts as the Yankees exited at the ALCS stage.

On August 30, 2020, he became the first player in Yankees history to hit a pinch-hit grand slam in extra innings as he connected off Drew Smith of the New York Mets in the 8th inning of the second game of a seven-inning doubleheader. He was batting for Erik Kratz, who had started the game behind the plate, and all the runs were needed in the Yankees' 5-2 win, as the Mets scored once then loaded the bases before Luis Cessa came in to strike out Wilson Ramos and end the game. He had started the year very slowly, as he was hitting just .130 after 25 games, with 5 homers and 10 RBIs.