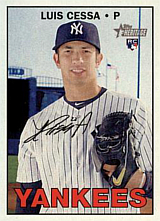 Luis Cessa is a big league long reliever/swingman of four seasons, all with the New York Yankees

The New York Mets, behind a trio of scouts (Rafael Perez, Ismael Cruz and Fred Mazuca), originally signed him in 2009. He was an infielder at the time and played his first two seasons with the DSL Mets and DSL Mets 1 as a position player. When he failed to hit over .200 either year, he was moved to the mound. The decision proved to be a good one, as in his first season on the hill in 2011, he did well enough to move to the GCL Mets after 5 starts with the DSL Mets 2. He was a combined 4-3, 3.19 in 15 games that year, being used out of the bullpen after moving to the United States. In 2012, he went 5-4, 2.49 in 13 games as a starter for the Brooklyn Cyclones of the New York-Penn League and followed with an 8-4, 3.12 record in 21 starts for the Savannah Sand Gnats in 2013. He spent most of 2014 in the Florida State League with the St. Lucie Mets, where he was 7-8, 4.00 in 20 starts, also pitching once for the Binghamton Mets in his first taste of AA. He started 2015 with Binghamton, where his record was a solid 7-4, 2.56 in 13 starts, to earn a promotion to the AAA Las Vegas 51s in early July. He was roughed up in 5 starts, going 0-3, 8.51, but had shown enough that the Detroit Tigers acquired him, along with fellow pitching prospect Michael Fulmer, in a trade for All-Star outfielder Yoenis Céspedes on July 31st. Coincidentally, when Cessa entered the MLB all-time register upon his debut in 2016, he did so directly after Céspedes alphabetically.

Luis made 7 starts for the Toledo Mud Hens in 2015, going 1-3, 5.97 to finish with a combined pitching line of 8-10, 4.52 with 119 strikeouts in 139 1/3 innings. That was good enough to get traded again. On December 9th, he headed to the New York Yankees, alongside fellow pitching prospect Chad Green, for major league reliever Justin Wilson. Luis made the team out of spring training in 2016 and debuted against the Tigers in relief on April 8th; in his first inning of work, he gave up an opposite-field homer to Miguel Cabrera, then followed with a scoreless frame. His was an arm that was mostly used in emergencies his first three seasons, never pitching more than 17 times while making several starts at random times and shuttling regularly between the Bronx and the AAA Scranton/Wilkes-Barre RailRiders. In 2019, he was used strictly in relief, going 2-1 with a personal best 4.11 ERA, in 43 games and 81 innings. He also made his first postseason appearance that year, pitching 4 scoreless innings in relief in the Yankees' loss to the Houston Astros in the ALCS.

In 2020, he was used exclusively as a reliever by the Yankees during the pandemic-shortened season, putting up an ERA of 3.32 in 21 2/3 innings over 16 games. His only decision was a save as he was used in middle relief. He appeared three times in the postseason, giving up 2 runs in 4 innings. He was used in a similar role in 2021, but pitched quite well while going largely under the radar, going 3-1 with an era of 2.82 in 29 games over the first four months. On July 27th, he and fellow reliever Justin Wilson were dealt to the Cincinnati Reds with the only return being a player to be named later. There was immediate speculation that the Yankees were clearing some salary space to make an acquisition before the trading deadline coming up in two days, but in the meantime, the Reds, who were also in contention, had added two useful pitchers on the cheap.