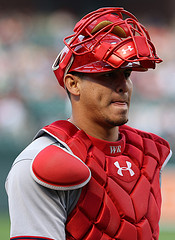 Wilson Ramos is a catcher who made his major league debut with a bang for the Minnesota Twins in 2010. His brothers David Ramos and Natanael Ramos played pro ball, as did his uncle Miguel Campos.

The Valencia native batted .291/.345/.438 for the 2007 Beloit Snappers. Baseball America rated him the Minnesota Twins' #3 prospect. He was 1 for 6 for Aragua in the 2008 Caribbean Series. In 2008, the 20-year-old had a line of .288/.346/.434 with 78 RBI for the Fort Myers Miracle. He paced the team in RBI, homers (13), hits (130) and doubles (23), finishing 4th in the Florida State League in the latter department. He joined Josh Thole as the FSL's All-Star catchers. Baseball America rated him the FSL's best defensive catcher, the #8 overall prospect in the league (right behind Jeremy Hellickson and Sean West) and the #3 prospect in the Twins system.

In the 2009 Caribbean Series, Wilson hit .385/.529/.385 and was named the All-Star catcher as Aragua won the Series. That summer, Ramos hit .317/.341/.454 in 54 games for the New Britain Rock Cats, missing significant time with a right hamstring strain; he had a 5-game rehab stint with the GCL Twins, swatting 3 homers in that span. He led Minnesota minor leaguers in average. Baseball America rated him the #8 Eastern League prospect (right behind Junichi Tazawa) and the #2 Twins prospect.

After his fine performance in AA in 2009, Ramos almost made the Twins' roster out of spring training in 2010, after batting .400 in the Grapefruit League. The Twins' brass decided to send him to AAA to start the year, so that he could play every day while Drew Butera backed up Joe Mauer in the majors. He had a tough first month for the Rochester Red Wings, batting only .179, but he was recalled to Minnesota on May 2 when Mauer was bothered by a heel injury. Inserted immediately into the lineup, he went 4 for 5 in his first game, becoming the first member of the Twins to collect 4 hits in his debut since Hall of Famer Kirby Puckett in 1984; he was also the first catcher in American League history to do so. The Twins beat the Cleveland Indians 8-3 that day. In his second game on May 3, he went 3 for 4 in a 10-4 win over the Detroit Tigers. Of his 7 hits over his first 9 major league at-bats, 3 were doubles. He returned to Rochester after a brief stay in the big leagues, then on July 29 was dealt to the Washington Nationals in return for closer Matt Capps. He hit his first major league homer off R.A. Dickey of the New York Mets on September 8th.

Ramos spent the entire 2011 season with the Nationals, where he was the team's primary catcher, getting into 113 games during which he hit .267/.334/.445 with 22 doubles, 15 homers and 52 RBI. He was originally expected to share playing time with veteran Ivan Rodriguez, but he played so well that Pudge was relegated to a substitute role. After the season, he returned to Venezuela to play winter ball for the Tigres de Aragua, but on November 9th was kidnapped outside his home in Santa Inés, Carabobo. He was rescued by police two days later, having been detained in a mountainous area in the center of Carabobo State, 40 miles from where he had been abducted. It was a well-planned operation, and he was held for 51 hours altogether, during which he was neither restrained nor blindfolded. He later explained that the kidnappers knew many details about his personal life and threatened to hurt his family if he did not cooperate. He was moved to the rugged mountainous area to be held in a small cabin, however the police suspected that he had been moved there, as it was where they had found the victim of an earlier similar kidnapping the previous month. The outpost could only be reached on foot and his rescue involved an exchange of gunfire. Ramos told journalists he hid under a bed while bedlam was breaking out around him, only coming out when he heard police call his name. The four kidnappers were arrested, as were two other men suspected of having helped them.

Wilson began the 2012 season as the Nationals' starting catcher, but his year came to a premature end on May 12th, when he twisted his knee going back to pick up a passed ball that had rolled to the screen at Great American Ballpark in Cincinnati, OH. He was diagnosed with a torn anterior cruciate ligament, a season-ending injury. In 25 games, he was hitting .265/.354/.398 with 3 homers and 10 RBI. He was back with the Nats at the start of the 2013 season, but suffered another injury after only 14 games, this time a strained left hamstring. He was out from mid-May to the start of July, but marked his return to action with a go-ahead three-run homer against the Milwaukee Brewers on July 4th. He played 78 games and hit .272/.307/.470 with 16 homers and 59 RBI, but his absence had been very costly, as the Nationals had fallen well back of the NL East lead when he was out and were unable to make up the lost ground after his return. More injury trouble followed in 2014 as he broke his hamate bone on Opening Day, leaving the catching duties to fellow Venezuelans Jose Lobaton and Sandy Leon in his absence. He was back on May 7th.

On June 16, 2015, he had an unusual multi-homer game as both long balls came off position players. The Nationals routed the Tampa Bay Rays, 16-4, that day, and Rays manager Kevin Cash called on infielder Jake Elmore and Nick Franklin to pitch the last two innings. He hit a solo shot off Elmore in the 8th and a two-run blast off Franklin in the 9th, finishing with 4 RBIs. This came as he was enjoying his best season, being among the Nation League's batting leaders during the first half and being named to the All-Star team for the first time as a result. However, a couple of days after the Nationals had clinched a division title, he was lost for the rest of the season and, more importantly, the entire postseason when he again tore his anterior cruciate ligament on September 26th. He sustained the injury, which was very similar to the one that had afflicted him in 2012, when he landed awkwardly while trying to catch an errant throw in a game against the Arizona Diamondbacks. He was hitting .305 with 22 homers and 80 RBIs in 131 games, all career bests, and his absence left a devastating hole in the team's line-up. He missed the remainder of the year and the postseason, then became a free agent. On December 12th, he finalized a two-year deal with the Tampa Bay Rays that gave him $12.5 million to move over.

It took him a while to play his first game in 2017, as he was still recovering from his late-season injury from the previous year. He finally took the field for his new team on June 24th. Attracting injuries like a magnet, however, he was hurt again on July 24th when struck in the helmet by a broken bat during an at-bat by Ruben Tejada of the Baltimore Orioles. The force of the blow caused a deep laceration and he had to leave the game as it took six staples to close the gash. He was thus limited to 64 games, during which he hit .260 with 11 homers and 35 RBIs. In early 2018, he put together a 17-game hitting streak for the Rays, coming withing two of the team record. He was voted the starting catcher in the 2018 All-Star Game but he had to bow out of the game as he was on the disabled list at the time with a hamstring injury. This was still the case on July 31st when he was traded to the Philadelphia Phillies in return for a player to be named later, his injury having reduced his value significantly. He was hitting .297 with 14 homers and 53 RBIs in 78 games before the injury, having played his last game for the Rays on July 14th. When he did play his first game for the Phils, on August 15th, he showed the wait had been worth it as he unleashed three extra-base hits - two doubles and a triple -, scored 3 and drove in 3 runs in a 7-4 win over the Boston Red Sox, owners of the best record in the majors. He played 33 games for Philadelphia, hitting .337 with 1 homer and 17 RBIs to finish at .306 with 15 homers and 70 RBIs. However, the Phillies faded down the stretch and missed the postseason.

Ramos was a free agent again after the 2018 season and on December 16th signed a two-year contract with the New York Mets worth $19 million. He was penciled in as the starting catcher in 2019, with incumbents Travis d'Arnaud and Kevin Plawecki set to compete for the back-up job. He played 141 games that first year, hitting .288 with 14 homers and 73 RBIs, good for an OPS+ of 106 in what was a very solid season. However, the Mets had yet another disappointing season, and 2020 was more of the same, as the random collection of players - some quite expensive - that they put on the field failed to jell. Ramos hit .239 in 45 games in a season shortened to 60 games by the Coronavirus pandemic, with his OBP falling to a troublesome .297, and his slugging percentage to .387. The Mets were looking for an upgrade as his two-year deal ended with the season, and tried to lure free agent J.T. Realmuto to Flushing Meadows, but losing their new General Manager midway through the off-season did not help and on January 26th, the day that Realmuto re-signed with the Philadelphia Phillies, Wilson also snubbed the Mets, signing a one-year deal with the Detroit Tigers.