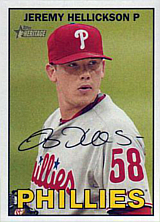 Jeremy Hellickson entered 2010 as one of the top pitching prospects in baseball. He made his major league debut with the Tampa Bay Rays on August 2nd of that year.

Hellickson was 2-0 with 17 K and one walk in 14 innings for the USA in the 2003 World Youth Championship, when the US won Gold. In the semifinals, Hellickson fanned 12 in a 6-hit, 1-run effort to beat Cuba 2-1. The 16-year-old was timed at 92 mph. He did not take the tournament MVP award, which went to teammate Justin Bristow. The Tampa Bay Devil Rays chose him in the 4th round of the 2005 amateur draft, their fourth straight pitcher after Wade Townsend, Chris Mason and Bryan Morris. He turned down a scholarship offer to Louisiana State University to sign with Tampa Bay. (note: the 2010 Rays Media Guide mistakenly lists him as an 8th-round choice in 2006). He had been scouted by Tom Couston.

Jeremy made his pro debut with the 2005 Princeton Devil Rays and struck out 11 in six innings over four games but allowed four runs. Moved up to the Hudson Valley Renegades in 2006, he turned in a 4-3, 2.43 record with 96 whiffs in 77 2/3 innings and a WHIP under one. He led the New York-Penn League in strikeouts and was 9th in ERA, winning him All-Star honors. Baseball America rated the right-hander as the top prospect in the NYPL that year and the #9 prospect in the Tampa Bay organization.

Hellickson remained dominant with the 2007 Columbus Catfish, going 13-3 with a 2.67 ERA and .214 opponent average. He was 5th in the South Atlantic League in ERA. Baseball America rated him the league's #8 prospect (third among pitchers behind Fautino de los Santos and Henry Sosa) and the #8 Tampa Bay prospect. In 2008, the right-hander split time between the Vero Beach Devil Rays (7-1, 2.00, 83 K, 5 BB in 76 2/3 IP) and the Montgomery Biscuits (4-4, 3.94, 79 K in 75 1/3 IP in his first challenge as a pro). He led Tampa Bay farmhands in strikeouts (162) and ERA (2.96). He ranked fifth in the affiliated minors in strikeouts behind David Bromberg, David Hernandez, Madison Bumgarner and Tommy Hanson. Baseball America rated him as having the best control in the Florida State League. Had he qualified, he would have led the league in ERA. Baseball America also ranked him the #6 FSL prospect (between Adrian Cardenas and Sean West), the #12 Southern League prospect (between Chris Coghlan and Jordan Schafer) and the #8 Rays prospect.

Hellickson continued to shine in 2009. He was excellent with both Montgomery (3-1, 2.38, 62 K in 56 2/3 IP, .198 opponent average) and the Durham Bulls (6-1, 2.51, 70 K in 57 1/3 IP, .152 opponent average). His composite opponent average of .178 led all minor league starters, .017 over runner-up Matt Moore. Had he qualified, he would have been second in the SL in ERA (behind Travis Wood) and second in the International League (behind Carlos Torres). All this took place despite missing a month due to shoulder strain. He was named Tampa Bay's Minor League Pitcher of the Year. Finally, he won the Bobby Murcer MVP award in the Triple-A National Championship Game, holding the Memphis Redbirds to two hits and no runs in five innings. He was stuck with a no-decision as his bullpen blew the 4-0 lead after he left and the club won 5-4 in 11 innings. Baseball America ranked him as the #9 Southern League prospect (#2 after Jarrod Parker among pitchers), the #6 International League prospect (between Wade Davis and Austin Jackson), the #2 Tampa Bay prospect (after Desmond Jennings) and the 18th-best prospect in the minors. The publication also listed him as having the best fastball, changeup and control of a Rays minor leaguer. The club added him to their 40-man roster that winter.

Through 2009, Hellickson was 37-13 with a 2.71 ERA in 87 minor league games, with 507 strikeouts and 100 walks in 461 innings. He began 2010 very well with Durham at 9-2, 2.33 with 90 K in 88 2/3 IP and joined Jennings in being picked for the 2010 Futures Game. He started for the US and got the win in a 9-1 victory, though he allowed the only World run. He went 1-2-3 in the first, retiring Brett Lawrie, Osvaldo Martínez and Yonder Alonso. In the second, Alex Liddi flew out. Carlos Peguero and Wilkin Ramirez singled, then Wilin Rosario grounded out to drive in Peguero. Gorkys Hernandez was retired to end the inning. Zack Britton relieved Hellickson in the third.

Hellickson made his major league debut on August 2, 2010, starting a game against the Minnesota Twins. Up to that point, none of the Rays' five starters had missed a turn on the mound during the season, and the team's brass decided to give everyone an additional day of rest after a tough series against the New York Yankees by calling up the team's top pitching prospect for one game. He made the most of his opportunity, retiring the first 10 Twins batters he faced, and leaving the game after giving up only 2 runs in 7 innings. He was credited with the Rays' 4-2 win, and when the Yankees lost to the Toronto Blue Jays later that evening, the Rays were tied for first place in the AL East. After the game, he was optioned back to AAA while the Rays purchased the contract of 1B Dan Johnson to take his spot on the 25-man roster. In fact, he returned to Tampa Bay almost immediately, when two of the Rays' starting pitchers soon came down with shoulder injuries. He picked up right where he had left off: in his second start, he gave up no runs to the Detroit Tigers in 7 innings, then beat the Baltimore Orioles with another solid performance on August 15, giving up 1 run in 6 innings, to become the first pitcher in Tampa Bay history to win his first three major league starts. He was also the first MLB player since 1920 to top six innings and allow three or fewer hits in his first three starts in the majors. His streak ended with a 5-4 loss to the Oakland Athletics on August 20, after which he was sent to Class-A Charlotte to get some work in and stay close to Tampa as Jeff Niemann and Wade Davis were about to return from the disabled list. Hellickson went on to win 2010 International League Pitcher of the Year honors; Dan Johnson, who had taken his spot on the MLB roster a month prior, was named league MVP.

Hellickson opened the 2011 season in the Rays' starting rotation. He pitched well in April, but really shone in May, when he went 4-1 with a 1.36 ERA to earn the American League's Rookie of the Month honors; he struck out 23 batters in 33 innings during the month, giving up only 6 runs on 19 hits. On August 25th, he became the first pitcher in Tampa Bay history to strike out four batters in an inning; the feat came during a 2-0 loss to the Detroit Tigers. He finished the season with a record of 13-10 and a 2.95 ERA and was unbeaten over the last month as the Rays surged to an unlikely wild card spot. He finished 8th in the league in ERA (between C.J. Wilson and CC Sabathia), fourth in fewest hits per 9 innings (6.95, trailing Justin Verlander, Josh Beckett and Jered Weaver) and tied for 8th in walks (72, even with Ervin Santana). He started and lost Game 4 of the ALDS against the Texas Rangers, 4-3, giving up 3 runs in 4 innings. After the season, he was honored with the 2011 American League Rookie of the Year Award.

On November 14, 2014, Hellickson was traded to the Arizona Diamondbacks in return for two minor leaguers, IF Andrew Velazquez and OF Justin Williams. He made 27 starts for the D-Backs in 2015, going 9-12, 4.62 while pitching 146 innings and striking out 121. With the team having a number of young pitchers ready to contribute, they decided to get rid of Hellickson and his high salary by sending him to the Philadelphia Phillies after the season on November 14th, receiving young pitcher Sam McWilliams in return. He had a nice season for the Phillies in 2016, leading the team in wins as he finished at 12-10, 3.71 in 32 starts, pitching 189 innings and striking out 154 batters. He became a free agent after the season and while he could have likely received some nice offers given the small number of proven pitchers available on the market, he decided instead to accept the Phillies' qualifying offer of $17.2 million in order to stay with them in 2017. He went 6-5, 4.73 in 20 starts for the Phillies and his name was regularly mentioned as someone who could be targeted by a contending team at the trading deadline. This is exactly what happened on July 28th, as he was sent to the Baltimore Orioles in return for OF Hyun Soo Kim and prospect Garrett Cleavinger. In his first start for his new team on August 2nd, he pitched 7 scoreless innings against the Kansas City Royals to lead Baltimore to a 6-0 win. He went 2-6, 6.97 in 10 starts for the Orioles to finish the year with a combined record of 8-11, 5.43 in 30 games and 164 innings.

He remained unsigned through most of spring training in 2018, only signing a contract on March 16th with the Washington Nationals. Straining his hamstring, he only tossed 91 1/3rd innings, re-signing with the club in February 2019. He was once again bitten by the injury bug, making 9 appearances (8 starts) and posting a 6.23 ERA before his season was cooked. He announced his retirement the following February, having gone 76-75 in 232 games over 10 seasons.

In retirement, he decided to join a group of old high school buddies playing slow-pitch softball in Iowa. It was a chance for him to reconnect with the joy of playing the game without any of the pressure of it being big business.