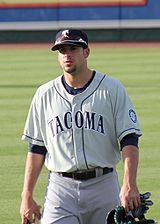 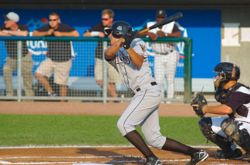 Alex Liddi was MVP of the 2009 California League. Two years later, he became the first major leaguer to be born and raised in Italy.

Liddi played for the Italy national team in the 2004 World Junior Championship, hitting .158/.238/.211 as the starting third baseman. He was in the European baseball academy run by Major League Baseball. Shortly after his 17th birthday, he was signed by the Seattle Mariners. The scouts were Wayne Norton and Mauro Mazzotti.

With Wisconsin, Liddi hit .240/.308/.385 with 123 strikeouts in 2007. He was the only Italian position player in the minor leagues at the start of the 2007 season. In the 2007 European Championship, Alex batted .471/.421/.588 as one of Italy's top threats in a disappointing second-division finish. He was second on the team to Giuseppe Mazzanti in average and slugging. Liddi and Mazzanti (who had also spent time in the Mariners system) alternated between first base and third base, the same arrangement Italy had used in the 2006 Intercontinental Cup. Liddi remained with the Italian team for the 2007 Baseball World Cup, hitting .240/.269/.440 and making two errors in seven games at third base.

Liddi returned to Wisconsin for the 2008 season, hitting .244/.313/.360 in 125 games, then made the Italian roster for the 2009 World Baseball Classic, sharing third base duties with Mike Costanzo. Liddi opened 2009 with a bang, hitting .341/.390/.619 with 16 homers and 60 RBI in 67 games for the High Desert Mavericks, tied for the California League lead in RBI; he made the Cal League All-Star game as a starter. He kept up his hot pace for the whole season, finishing with a batting line of .345/.411/.594 with 44 doubles, 23 home runs, 97 runs and 104 RBI in 129 games. He was named the California League MVP. Baseball America rated him as the #6 prospect in the circuit. The Mariners named him their Minor League Player of the Year, the second European to win that honor in a short period, following Greg Halman of the Netherlands. Liddi finished among the Cal League's leaders in batting average (a tiny iota behind leader Koby Clemens, also .345), OBP (4th), slugging (3rd), OPS (3rd), runs (5th), hits (170, tied for 2nd with Tyson Gillies), doubles (3rd, one behind the co-leaders), home runs (tied for 5th with Roger Kieschnick and Scott Van Slyke) and RBI (tied for 3rd).

In the 2009 Futures Game, Liddi hit third and started at third base for the World team. In the first, he drew a walk from Chris Tillman and came around to score on a Jesus Montero grounder. In the third, he drew another walk, courtesy of Brian Matusz, but was retired on a double play. In the bottom of the third, he moved to first base, replacing Bárbaro Cañizares, as Dayán Viciedo came in to man third. Alex flew out against Jarrod Parker in the 5th. Rene Tosoni pinch-hit for him in the 7th. The World won, 7-5.

He missed the 2009 Baseball World Cup as the California League postseason was in progress. In 2010, he slumped to .281/.353/.476 for the West Tenn Diamond Jaxx with 37 doubles, 8 triples, 15 home runs, 92 RBI and 145 strikeouts while fielding .909 at 3B (after .945 in 2009). He tied Willie Cabrera for fourth in the Southern League in doubles, tied Robinson Chirinos for 8th in homers, tied John Matulia and Dave Sappelt for fifth in triples, led in RBI, led in errors at third base (27) and was second to Carlos Peguero in whiffs. In the 2010 Futures Game, he was the cleanup hitter for the World team, again starting at third. He flew out against Jeremy Hellickson his first trip up, then popped up against Zach Wheeler in the 4th. In the 5th, he made an error on a Mike Trout grounder, setting up a run. Pedro Báez pinch-hit for him in the 6th. The World lost, 9-1. Baseball America named him as the 16th-best SL prospect, between Sappelt and Brandon Beachy.

In 2011, Liddi moved up to the AAA Tacoma Rainiers and was sharper in the field (.943 fielding percentage at 3B; he even got into 24 games at short). He batted .259/.332/.488 with 32 doubles, 30 home runs, 121 runs, 104 RBI and 170 strikeouts in 138 games. He easily led the 2011 Pacific Coast League in runs (21 ahead of Cole Gillespie), was third in home runs (behind Bryan LaHair and Jai Miller), was 5th in RBI (between Brett Pill and Anthony Rizzo) and was second to Miller in strikeouts. He set a new Tacoma record for runs (Hosken Powell had set the mark in 1977) and became the second Tacoma player with both 100 runs and 100 RBI, following Craig Kusick in 1973. He became the 8th player to be chosen for the Futures Game three times, joining Carlos Carrasco, Shin-Soo Choo, Justin Huber, Seung Song, Edwin Encarnación, Gorkys Hernandez and Merkin Valdéz. In the 2011 Futures Game, he hit 5th and started at the hot corner in a 6-4 loss. With two on and two out in the first, he grounded out against Tyler Skaggs. He struck out against Matt Moore in the 4th and grounded out against Drew Pomeranz in the 6th. Jefry Marte replaced him in the bottom of the sixth.

Liddi was a September call-up to the 2011 Mariners. He became the first alumnus of the MLB European Academy to make the majors as well as the first born-and-raised Italian. Previously, only the Netherlands had produced homegrown major leaguers in Europe, including Liddi's Seattle teammate Greg Halman. In his historic MLB debut, he started at third base and hit 9th in a 3-1 loss to the Los Angeles Angels. He grounded out against Jerome Williams in the 3rd then struck out in the 6th. Kyle Seager pinch-hit for him in the 9th inning. He played 15 games in all for the Mariners, going 9 for 40 (.225), with 3 doubles and 3 homers. He made the Mariners' team out of spring training in 2012, although he had to share playing at 3B with Seager. On May 23rd, he hit his first major league grand slam, connecting off the Texas Rangers' Scott Feldman in the 5th inning. The Rangers had decided to walk Dustin Ackley intentionally to pitch to Alex, but he made them pay for their strategy, lining a pitch over the left-field wall at Safeco Field to lead Seattle to a 5-3 win. He was starting in left field that day, as Seager's strong play in the early season meant that the job at the hot corner was his for the immediate future.