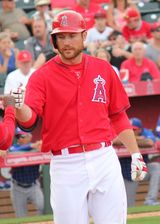 Roger Kieschnick was a third-round draft pick in 2008 after two tours with the USA's college national team. He is a third cousin of Brooks Kieschnick.

Kieschnick had an impressive freshman campaign at Texas Tech. He hit .359/.418/.549 with 54 runs and 55 RBI in 58 games. His 9 homers were the most by a school freshman since Josh Bard in 1997 and became the first true freshman to crack a grand slam in the season opener. He only had one error in the field. He made the All-Big 12 Conference outfield and won Conference Freshman of the Year honors, the first Red Raider to do so.

Following that fine debut, Roger joined Team USA and hit .290 in 62 AB during the summer. The team's highlight was a championship in the 2006 World University Championship.

In 2007, Kieschnick showed worse contact but more power .302/.373/.621 and led the Big 12 Conference with 25 doubles. He set a school record with five extra-base hits in a game. He was second-team All-Conference.

Kieschnick hit .255 for the US college team in the summer of 2008 but showed very good power. His 7 homers tied Pedro Alvarez for the club lead, easily outperforming top power prospects Brett Wallace (2 HR) and Justin Smoak (3). Kieschnick drove in 26 runs, tying Wallace for second o nthe club behind Alvarez. He was one of the top American batters in the 2007 Pan American Games, going 6 for 14 with a walk, two runs and a RBI for the Silver Medalists. Only Logan Forsythe had a higher average among the USA starters. He went 4 for 20 with a homer in the 2007 World Port Tournament.

As a junior, Kieschnick again made second-team Big 12 Conference, hitting .305 with 17 home runs and 65 RBI.

Kieschnick was taken 82nd overall in the 2008 amateur draft, chosen by the San Francisco Giants. He was signed by scout Todd Thomas and debuted as a pro on April 9, 2009, for the San Jose Giants against the Stockton Ports, going 1 for 3 with a walk.