Note: This page is for 2010s pitcher Matt Moore; for the drafted third baseman who became better known as an NFL quarterback, click here. 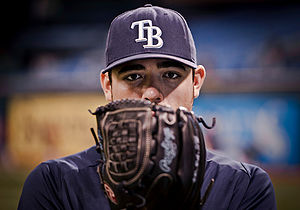 Pitcher Matt Moore reached the majors with the Tampa Bay Rays in 2011.

Moore was drafted out of high school by the Devil Rays in the 8th round of the 2007 amateur draft. He was signed by scout Jack Powell and spent his first two professional seasons with the Princeton Devil Rays/Princeton Rays in the Appalachian League, going 0-0, 2.66 in 2007 and 2-2, 1.66 in 12 starts in 2008, making the circuit's All-Star team. He moved to the Class-A Bowling Green Hot Rods in 2009, where he was 8-5, 3.15 in 26 starts. He struck out 176 batters and emerged as a top prospect, being named #35 on Baseball America's top 100 prospect list after the season.

Pitching for the Charlotte Stone Crabs of the Florida State League in 2010, Moore's 6-11 record in 26 starts was superficially unimpressive, but he had a very good 3.36 ERA and struck out an outstanding 208 batters in 144 2/3 innings, a Rays organization record at the time. He was named the circuit's Pitcher of the Week on four different occasions and made the league's All-Star team at the end of the year. His prospect ranking prior to the 2011 season had improved to #15. He started the season with Montgomery Biscuits of the AA Southern League, where he was outstanding over the first half. He went 8-3 in 18 starts, with a 2.20 ERA and 131 Ks in 102 1/3 innings, while allowing only 68 hits. He threw a no-hitter against the Mobile Bay Bears on June 16th, then pitched for the U.S. team in the 2011 Futures Game, then was promoted to AAA Durham. He continued just where he had left off, making 9 starts with a 4-0 record and a 1.37 ERA while again striking out well over a batter per inning. He was named the Southern League Pitcher of the Year and got the call to Tampa Bay in September, by which time he had climbed to #3 on Baseball America's prospect list. Overall he ranked second overall in the minor leagues in ERA (1.92), strikeouts (210) and opponents' batting average (.182) and was tops in strikeouts/9 innings at 12.2. He was a mid-season All-Star in the Southern League, and a post-season All-Star in the International League. He made his major league debut in relief on September 14th, and won his only start of the year with 5 scoreless innings in a key game against the New York Yankees on September 22nd, finishing the year 1-0, 2.89 in 3 appearances. With the Rays' starters dead tired after beating the Boston Red Sox for the American League­ wild card, Moore was the surprise choice to start Game 1 of the ALDS against the Texas Rangers on September 30th. Belying his age and lack of experience, Moore pitched a superb game, holding the Rangers scoreless for 7 innings as the Rays won handily, 9-0. His other appearance, in Game 4, was also quite good, although he gave up a solo home run to Adrian Beltre in 3 innings of relief - the only hit he gave up. The Rays lost the game, 4-3, and the series that day. After the season, the Rays wasted no time in placing their young pitcher in the fold for the long-term, signing him to an 8-year deal that could be worth almost $40 million if he remains in the big leagues for the entire time span.

As a rookie in 2012, Moore made 31 starts for the Rays, pitching 177 1/3 innings with a record of 11-11, a 3.81 ERA and 175 strikeouts. The Rays were careful not to allow him to pitch too many innings. he was 10th in the American League in strikeouts, but his 81 walks also placed him 7th. He also finished in the top 10 in the league in strikeouts per nine innings and fewest hits per nine innings, both statistics being excellent indicators of future success.

Moore had a tremendous month of April for the Rays in 2013, going 5-0 with a 2.33 ERA and 38 strikeouts in 32 innings; however, he lost out to the Boston Red Sox's Clay Buchholz for Pitcher of the Month honors in the American League. On May 14th, when he earned a 5-3 win against the Boston Red Sox­, he became the first pitcher in the AL to reach 7 wins, and the first in Rays history to start a season 7-0. That sparkling record went along with a 2.44 ERA and an opponents' batting average of only .172 at that point. When he defeated the Baltimore Orioles, 3-1, on May 19th, to go 8-0, he set the Rays franchise record with 9 consecutive wins, beating a mark set by teammate David Price the previous season, and also evoked the great Babe Ruth: at 23 years old, he was the youngest lefty to start a season 8-0 since the Babe had done so at age 22 in 1917. He suffered his first loss of the season on June 4th, when the Detroit Tigers whacked him for 6 runs on 7 hits and 6 walks in 2 innings on their way to a 10-1 win. He set a personal record for wins on July 6th when he defeated the Chicago White Sox, 3-0, to improve to 12-3. He was not originally selected to play in the 2013 All-Star Game, but was added to the American League squad when Yu Darvish went on the disabled list with an injury. After pitching a scoreless inning in the All-Star Game, he recorded his first career complete game and shutout on July 22nd when he blanked the Boston Red Sox, 3-0, on 2 hits. Unfortunately for the Rays, he had to be placed on the disabled list on July 31st because of a sore muscle in his left elbow, although the injury was not thought to be major. He missed all of August, then went 3-1 in 6 September outings, although those were kept short, as he only once pitched into the 7th inning. He ended the season at 17-4, 3.29 in 27 starts and 150 1/3 innings. He started Game 1 of the ALDS against the Red Sox, suffering a 12-2 loss, then pitched two scoreless innings in relief of Jeremy Hellickson in Game 4 but was not involved in the decision.

Moore then made two starts in 2014 before running into more serious injury issues. He was tagged with a 3-0 loss to the Toronto Blue Jays on April 2nd, then left his April 7th start against the Kansas City Royals in the 5th inning when he felt something wrong in his elbow. He was placed on the disabled list and sent to see Dr. James Andrews for a diagnostic, who recommended Tommy John surgery, thus ending Matt's season. He was out of the big leagues until July 2, 2015, when he made his return as a starting pitcher for the Rays. He made 12 appearances for the team, all as a starter, missing all of August except of an August 1st start. He went 3-4, 5.43 in 63 innings as he was still working his way back to full strength.

Moore was one of the heroes of Tampa Bay's historic game in Havana, Cuba on March 22, 2016 against the Cuban national team, as he pitched 6 scoreless innings for the Rays, getting credit for the 4-1 win. In the regular season, he made 21 starts for Tampa Bay, with a record of 7-7, 4.08. He pitched 130 innings, showing he was back in full health and on August 1st, he was acquired by the San Francisco Giants in a trade for three players: IF Matt Duffy and minor leaguers Lucius Fox and Michael Santos. However, if the Giants were looking for immediate help from Matt, it didn't quite work that way, as he lost two of his first three starts with his new team, the other one resulting in a no-decision, and while he pitched exactly 6 innings each time out, it was with a 4.50 ERA. On August 25th, he started a key game against the Los Angeles Dodgers, with the Giants in danger of falling four games back in the division race. He responded with the best start of his career, holding the Dodgers hitless through eight innings and coming within one out of throwing a no-hitter. Rookie Corey Seager broke his bid with two outs in the 9th with a single to right, and Moore left the game immediately, having made over 130 pitches. Still, his tremendous effort resulted in a 4-0 win and San Francisco moving back to within two games of L.A. He went 6-5, 4.08 for the Giants to finished with a combined line of 13-12, 4.08 and 178 strikeouts in 198 1/3 innings. He made one postseason start, in Game 4 of the NLDS on October 11th, and was very good, allowing just 2 runs in 8 innings, but he was not involved in the decision as the Giants lost the game, 6-5, to the Chicago Cubs.

Moore's lone full season with San Francisco, in 2017, was a tough one, however. The team sank to the bottom of the National League standings and he contributed to the fall by going 6-15, 5.52 in 32 games. Both his 15 losses and 107 earned runs allowed led the league. He pitched 174 1/3 innings and struck out 148 batters. After the season, the Giants decided to dispose of some higher-paid player as they needed to rebuild after their wreck of a season, and Moore was a victim, being traded to the Texas Rangers on December 15th in return for two minor leaguers, Israel Cruz and Sam Wolff. 2018 was just as bad, as he went 3-8, 6.79 for Texas. He was taken out of the starting rotation after 12 starts, and ended up with a majority of his 39 appearances coming in relief - largely in long relief as he 102 innings. The source of his problems was pretty obvious: even though his strikeout rate was still good, he just allowed too many batters to reach base, with 128 hits and 41 walks. Following the season, he signed as a free agent with the Detroit Tigers. He made the opening day roster after a strong spring in 2019 and had an excellent first start against the Toronto Blue Jays on March 31st, allowing just 2 hits and a walk in 7 innings, but he ended up with a no-decision. He then had to leave his next start, against the Kansas City Royals on April 6th after just 3 innings, having hurt his knee while attempting to field a bunt. He was immediately placed on the injured list and on April 17th, the Tigers announced he was done for the year as he would need to undergo knee surgery. He thus finished the year with a virgin ERA in 10 innings, being sidelined just as he had seemed to be recapturing his past form.

He then signed with the Softbank Hawks for 2020. He was 6-3 with a 2.65 ERA. Had he qualified, he would have been third in the Pacific League in ERA (behind Kodai Senga and Yoshinobu Yamamoto), though he was nearly last among Softbank's regular pitchers (Shuta Ishikawa and Nao Higashihama were both better, while Tsuyoshi Wada was also under 3). He got the start in Game 3 of the 2020 Japan Series and threw seven hitless innings (2 BB, 5 K) against the Yomiuri Giants; Liván Moinelo and Yuito Mori nearly completed the second Japan Series no-hitter, but the Giants got a hit with two outs in the 9th. The Hawks still cruised to a historic second straight Japan Series sweep. Ryoya Kurihara was named Series MVP. Following that successful season In Japan, he decided to return to Major League Baseball and on January 29, 2021 he signed a one-year deal with the Philadelphia Phillies for $3 million.