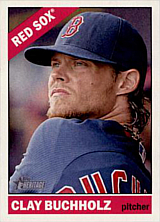 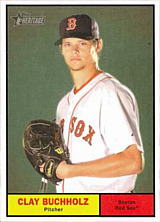 "This kid can come up and pitch a no-hitter, and he's going to go back down... If he throws a no-hitter I may send him back with a present. But he's going back." - Terry Francona, prior to Clay's first big league start in 2007

Clay Buchholz is a two-time American League All-Star. In his second career start, on September 1, 2007, he threw a no-hitter.

In 2005, Clay had a 1.14 ERA, fifth-lowest in D-I junior colleges, pitching for Angelina College. He was chosen an All-American by Baseball America. He was selected by the Boston Red Sox in the 1st round of the 2005 draft and signed by scout Jim Robinson for $800,000. He made his debut that summer with the Lowell Spinners and went 0-1 with a 2.61 ERA in 15 starts. He began the next year with the Greenville Drive, where he was 9-4 with a 2.62 ERA in 21 starts before being promoted to the Wilmington Blue Rocks, where he was 2-0 with a 1.13 ERA. Following the season, he was ranked the Red Sox best pitching prospect by Baseball America and second best prospect overall. He began 2007 with the Pawtucket Red Sox. He pitched the 6th inning of the 2007 Futures Game for the US, allowing a homer to the first batter he faced, Canadian first baseman Joey Votto, then struck out two of the next three to wrap up his inning of work.

Clay made his major league debut for the Red Sox with a winning start against the Los Angeles Angels on August 17. In his second career start, deployed as an emergency fill-in for knuckleballer Tim Wakefield, he pitched a 10-0 no-hitter over the Baltimore Orioles on September 1. With Buchholz nearing his career high in innings pitched, manager Terry Francona decided to move him to the bullpen instead of risking his young arm in the rotation. He made two more appearances before being shut down with shoulder fatigue, missing the Red Sox latest march to a World Series championship. The next two seasons, 2008 and 2009, saw Clay largely splitting time between Triple A Pawtucket and the big league rotation. He finished 2-9, 6.75 in 16 games (15 starts) with the big league Sox in '08, finding himself back in Double A with the Portland Sea Dogs for a spell. He played a bigger part in 2009, coming on strong after a call up in July to finish 7-4, 4.21 and play a role in the Sawx's return to the postseason. He made his first postseason start in the ALDS, allowing 2 earned runs in 5 innings against the Los Angeles Angels as Boston bowed out quickly. He put everything together in 2010, making his first All-Star team (he did not play due to injury) while finishing 17-7, 2.33 in 28 starts. He signed a four year, $30 million extension to stick around Fenway in April 2011 but suffered a stress reaction in his back, shutting him down by June after 14 starts (6-3, 3.48). He missed time with a gastrointestinal issue, later determined to be esophagitis, in 2012, but still made 29 starts to the tune of an 11-8, 4.56 mark as the Sox finished last in the AL East.

Buchholz flirted with a second no-hitter on April 14, 2013, defeating the Tampa Bay Rays, 5-0. He held the Rays hitless through seven innings before allowing a broken bat single to Kelly Johnson to lead off the 8th. He gave up another hit and Andrew Miller pitched the 9th to finish the combined shutout. He was the first American League pitcher to record four wins, beating the Kansas City Royals, 4-3, in the Sox's first home game since the tragic events at the Boston Marathon a week earlier. He continued to pitch lights out, finishing April with a 5-0 record. He had a 1.19 ERA and 39 strikeouts in 37 2/3 innings to earn AL Pitcher of the Month honors. He became the first major league hurler to 6 wins when he shut down the Toronto Blue Jays on May 1st, giving up no runs on two hits in 7 innings as the Sox cruised to a 10-1 win. Not everyone was so impressed; Jays broadcaster (and former major league pitcher) Dirk Hayhurst accused Clay of cheating by putting a foreign substance on the ball, showing pictures of a white substance on his left forearm on which he wiped the fingers of his throwing hand. Buchholz brushed aside the accusations, claiming he was simply using rosin, which is allowed. He improved to 7-0 on May 22nd when he defeated the Chicago White Sox, 6-2, giving up a single run over 7 innings. He was named to the All-Star team for the second time, although he had to immediately bow out due to injury­, having pitched his last game June 8th. He only returned on September 10th, when he pitched 5 scoreless innings to defeat the Tampa Bay Rays, 2-0, and improve his record to 10-0. His return was timely, as the Sox now had a firm grasp on first place in the AL East and were looking to him as one of their leaders on the mound in the upcoming postseason. He finished the season at 12-1, 1.74 in 16 starts, then made 4 starts in the postseason, with no decisions and a 4.35 ERA, as the Red Sox won their third World Series in a decade by defeating the St. Louis Cardinals, 4 games to 2.

Buchholz made 28 starts in 2014 but with poor results, as his record was only 8-11 and his ERA rose to 5.34. For their part, the Red Sox finished last in a season to forget. He was bitten by the injury bug again in 2015, when he was limited to 18 starts. His record improved to 8-8, even though the Red Sox continued to struggle as a team, and his ERA was a solid 3.26. He struck out 107 batters in 113 1/3 innings as he pitched quite well when he was able to take his turn. The Red Sox were much improved in the early days of the 2016 season, but while Clay was healthy, his pitching was off. Over his first 10 starts, he went 2-5 with a 6.35 ERA, prompting manager John Farrell to move him to the bullpen in late May. On May 29th, he made his first relief appearance since the 2008 season when he was sent to pitch the 10th inning against the Blue Jays with the game tied, 3-3. He logged a scoreless inning of work and, when the Sox scored twice in the top of the 11th, was given credit for the win, the second of his career in a relief role in only three appearances. Clay ended up pitching 37 times for the Red Sox, making 21 starts, with a record of 8-10, 4.78. He finished strong as he was 3-0, 3.14 in September, and his ERA was a solid 3.22 in the second half. That did not translate to the postseason as he started Game 3 of the ALDS against the Cleveland Indians on October 10th and was charged with the 4-3 loss after giving up a pair of runs in four innings. 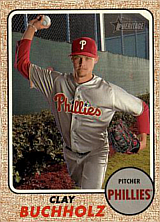 After ten seasons with the Red Sox, on December 20, 2016, Buchholz was traded to the Philadelphia Phillies for minor league second baseman Josh Tobias. Things did not work out as planned in 2017 as Clay made only two starts, losing one and putting up an ERA of 12.27 in 7 1/3 innings, suffering a torn flexor tendon in his right forearm. He underwent surgery, wiping out the rest of the season. He signed a minor league contract with the Kansas City Royals on March 20, 2018 but was released on May 1st when the Royals were not prepared to promote him to the major leagues. He had a 1.13 ERA in Double A and Triple A but walked 7 batters in 16 innings. He signed with the Arizona Diamondbacks on May 5th, and it turned out to be a good decision as he was back pitching in the majors by May 20th. He only gave up a run in each of his first two starts, but only had a loss to show for it as the Diamondbacks' bats fell asleep. On June 1, his teammates erupted for a club-record-tying 6 homers in giving him a 9-1 win over the Miami Marlins. He again gave up just 1 run, this time in 7 innings, as he lowered his ERA to 1.50. It was his first victory in almost two years, his last one coming on September 21, 2016. He was excellent from that point forward, going 7-2, 2.01 in 16 starts. On September 13th, he was unable to make a crucial scheduled start against the Colorado Rockies, scratched just before the game due to tightness in his right arm. He did not pitch again that season.

He signed with the Toronto Blue Jays on March 5, 2019, as the Jays added a few veteran starters - all reclamation projects - to support holdovers Marcus Stroman and Aaron Sanchez in the starting rotation. In the same boat were Matt Shoemaker and Clayton Richard, but Clay started the season on the injured list (where Richard joined him just before his first scheduled start of the year). Clay made his debut on April 13th, and it was not a relaxed assignment, as he was facing a very strong Tampa Bay Rays team that teed off the Jays' pitching the previous night. His mound opponent was none other that defending 2018 American League Cy Young Award winner Blake Snell. Buchholz acquitted himself well, giving up just a run in 6 innings, and earned a no decision when the Jays managed to score three late runs against the Rays' relievers to come out on top, 3-1. He was 0-1, 6.57 after 5 starts when he went back on the IL with shoulder inflammation. He was eventually transferred to the 60-day IL and there seemed little hope that he would pitch again that year, but he surprised everyone by coming back on August 25th. That day, he had an excellent outing, going 6 innings and giving up just 2 runs on 3 hits, but he was nonetheless on the wrong end of a 3-1 loss to the Seattle Mariners. In 12 starts, he finished 2-5, 6.56.

Buchholz has a good repertoire of pitches. At his best, he had a low to mid-90s fastball complemented by a changeup of just under 80 mph and his out pitch, a looping 12-to-6 curveball, which induced a lot of strikeouts. By the late 2010s, his fastball was topping out at 90 mph, so he had to rely increasingly on changing location and speed to fool opposing hitters, and trying to force hitters to make weak contact rather than attempt to blow pitches past them. This also meant that he needed a strong defense behind him to succeed.

In a strange twist, he was introduced to his wife, former model Lindsay Clubine, by future President Donald Trump. The two were introduced in 2008 when members of the Red Sox attended a UFC fight in Anaheim, CA and later went to a party hosted by Trump, who was a promoter of the event. They were married in November 2009 at one of the golf clubs owned by Trump, and Buchholz and Trump have remained friends since.