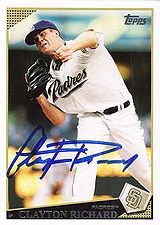 Clayton Richard was selected by the Chicago White Sox in the eighth round of the 2005 amateur draft. He was a highly-touted high school quarterback and played both football and baseball at the University of Michigan. In 2003, Rivals.com rated Richard as the best high school football prospect in the state of Indiana, and the fourth best pro-style quarterback in the country. After failing to win the starting QB job with the Wolverines, the left-hander dedicated himself to a professional baseball career. He won 9 games during his first two seasons in the White Sox organization.

The Wolverines opted to redshirt Richard during his freshman season at Michigan. He battled for the starting quarterback position during his second season, but lost to Chad Henne. He completed eight passes in fifteen attempts off the bench in 2004. The following spring, Richard appeared in 21 games for Michigan's baseball team, he was 0-1, with 5 saves and a 2.43 ERA. He was signed by scouts Nathan Durst and Mike Shirley for the White Sox in 2005. 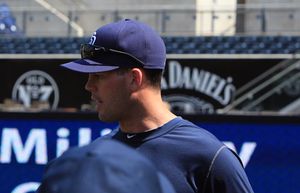 Although he has had generally poor results as a hitter in the major leagues, Richard is known to put quite a show in batting practice, launching long balls frequently, and generally showing the excellent athleticism that made him a successful quarterback in high school and college. In spite of hitting around .100 as a pitcher, he was successful in his first two lifetime opportunities as a pinch-hitter. The second, on May 20, 2012, was particularly dramatic: he was called to hit with 2 outs in the 13th inning against David Pauley of the Los Angeles Angels, and broke out of an 0-for-16 slump for the season by getting a single; he then came in to score the winning run when the next batter, Will Venable, launched a hit to left that was misplayed by the out-of-position Howie Kendrick. Richard bounced back with a 14-14 record and a 3.99 ERA in a league-leading 33 starts that season. He pitched 218 2/3 innings and struck out 107 batters, although the 228 hits he allowed were also the most in the circuit.

Richard filed for salary arbitration going into the 2013 season and was one of the last three players not to agree to a deal with his club, until he signed a one-year contract for $5.2 million on February 16th. His signing, combined with that of Homer Bailey meant that for the first time since the adoption of arbitration, no actual hearing would be held that season. He pitched only 12 times that season, going 2-5, 7.01, then missed more than two full calendar years of major league action. He made a couple of starts for the Tucson Padres in 2013, then made 4 appearances in the Arizona Diamondbacks organization in 2014, and joined the Pittsburgh Pirates in 2015. After 10 minor league starts with an ERA of 1.89, he was purchased by the Chicago Cubs on July 3rd due to a promotion clause in his contract (Pittsburgh did not feel the need to add him to the roster with a staff ERA around 3) and was a winner in his first start for the team on July 4th, pitching into the 7th inning in a 7-2 win over the Miami Marlins. He went 4-2, 3.83 in 23 games for the Cubs, including 3 starts. He then pitched 6 times in the postseason, all in relief, not giving up a run in 4 2/3 innings.

Clayton started the 2016 season with the Cubs, but struggled to a 6.43 ERA in 25 relief appearances, during which he recorded 1 save and was charged with 1 loss. He was released on August 3rd, missing the Cubs' run to their first World Series title in 108 years, but was picked up by the team with which he had had the most success, the San Diego Padres, three days later. The Padres put him back in the starting rotation and he did well for them, going 3-3, 2.52 in 11 games, 9 of which were starts. He was back as a full-time starter for the Friars in 2017, and while he found the going rougher with a very young team playing behind him, on August 16th, he recorded his first shutout since 2012 when he defeated the Philadelphia Phillies, 3-0. On September 20th, the Padres to a two-year contract extension worth $6 million. he finished the year at 8-15, 4.79, his 15 losses leading the NL that year. He also led the league with 2 complete games and 240 hit allowed as the Padres' workhorse.

On April 11, 2018, he made a rare appearance as a pinch-hitter and singled off Chris Stratton of the San Francisco Giants in the 3rd inning. He was batting for P Bryan Mitchell and then gave way to Jordan Lyles on the mound. It turned out that his was the only hit of the game for the Padres, as Stratton and reliever Derek Law combined on a one-hitter. According to the Elias Sports Bureau, it was the first time in history that a pinch-hitting pitcher had recorded his team's only hit in a game. On June 10th, he became the latest Padres pitcher to make an unsuccessful bid for a no-hitter as he started off a game against the Miami Marlins with 6 2/3 hitless innings before Miguel Rojas hit a clean single up the middle, then J.T. Riddle followed with an RBI single. He did win that game, 3-1, however. He went 7-11, 5.33 in 27 starts, logging 158 2/3 innings, being once again more valuable because of his durability than for his actual pitching, as he was clearly below average as a major league starting pitcher. This explains why on December 20th, he was designated for assignment when the Padres signed veteran 2B Ian Kinsler as a free agent. On December 30th, he was traded to the Toronto Blue Jays in return for OF Connor Panas.

Richard was counted on to be a regular starter for the Blue Jays in 2019, but injuries got the best of him. He was part of the starting rotation on Opening Day, but went on the injured list before he could make his firs start, which was delayed until May 23rd. He was 0-4, 6.89 in 7 starts until the end of June before he won his first game on July 1st, defeating the Kansas City Royals, 11-4. However, he was hit hard in his following start, giving up 6 runs in as many innings against the Baltimore Orioles on July 6th to suffer another loss, 8-1, then on July 13th had to leave a start against the New York Yankees after just 2 scoreless innings because of another injury. He did not come back, being released on September 12th as the Blue Jays let go of all their veteran starting pitchers in the second half of the season. He ended the year at 1-5, 5.96 in 10 starts.