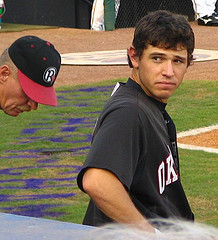 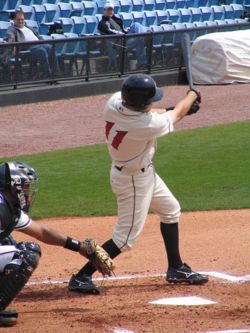 Kinsler led off the first two games of the 2011 season with home runs, the first player to MLB history to do so. He took Jon Lester deep in the opener and John Lackey in game two. He hit only .255 that year, but with a career-high 32 homers, 121 runs scored and 77 RBI in 155 games. He hit very well in the postseason, going 4 for 16 with 2 doubles and a homer as Texas defeated the Tampa Bay Rays in the ALDS, then 7 for 24 (.292) with 6 runs and 6 RBI in the ALCS against the Detroit Tigers, and finally 9 for 25 (.360) in the 2011 World Series as the Rangers lost to the St. Louis Cardinals in agonizing fashion in seven games. He had another good year with the bat in 2012, making the All-Star team for the third time on the strength of a .256 average, 46 doubles, 19 homers, 105 runs and 72 RBIs. The Rangers stumbled down the stretch however to be overtaken by the Oakland A's on the last day of the season, forcing them to play the Wild Card Game, which they lost to the Baltimore Orioles, 5-1, on October 5th. Kinsler went 2 for 3 with a walk and scored his team's lone run in the game. Playing 136 games in 2013, Kinsler saw his batting average improve to .277, to which he added 31 doubles, 13 homers and 72 RBIs, but the Rangers once again finished behind the Athletics in the standings, and this time lost a one-game playoff to the Rays to see their season end disappointingly early.

On November 20, 2013, Kinsler was traded to the Detroit Tigers in return for slugging All-Star first baseman Prince Fielder. He was an All-Star in his first season with Detroit in 2014, when he hit .275 with 40 doubles, 17 homers, 100 runs and 92 RBIs in 161 games. He led the AL with 726 plate appearances and 684 at-bats, a result of playing just about every game and hitting second in the line-up. In the postseason, he was part of a team-wide hitting slump however, as he was limited to a 1 for 13 performance as the Tigers were swept by the Baltimore Orioles in three games in the Division Series. In 2015, the Tigers fell to last place in the AL Central after getting off to an excellent start, but Ian was one of the few players who did not miss a beat. He hit .296 in 154 games, with 35 doubles and 11 homers, with 94 runs and 73 RBIs. While his counting stats were down somewhat compared to his first season in Detroit, his OPS+ was up, from 103 to 113. He followed that in 2016 with a .288 average, coupled with 28 homers, 117 runs and 83 RBIs in 153 games. Once again, he was among the most productive hitters on a team that was never really in the postseason race. He also won his first Gold Glove that season.

In 2017 Kinsler's production fell among rumors that he was going to be traded given the Tigers were now committed to a rebuild, but he was still with the team in August. On August 15th, the usually soft-spoken player made some very harsh comments about umpire Angel Hernandez, after having been ejected by him for asking questions regarding the strike zone the night before. This was not a spur of the moment passionate rant, but a measured reflection on whether Hernandez had what it takes to be a major league umpire at this point, given his complete inability to have a discussion about his decisions with anyone, and also ranged into the need for a system to hold umpires accountable for their on-field performance. As he explained: "It has to do with changing the game. He’s changing the game. He needs to find another job, he really does." He then added: "If I get fined for saying the truth, then so be it. He’s messing with baseball games, blatantly.” The comments did not lead to prolonged animosity between the two, as in the game of August 16h, he had an on-field conversation with Hernandez which ended with the two shaking hands. Kinsler expected to be suspended, but he was only fined for his statements, something which angered the World Umpires Association; a number of its members wore wristbands in solidarity to express their dissatisfaction with the lack of significant consequences for abuse against their members. He finished the year at .236 with 22 homers and 52 RBIs in 139 games in what was his worst major league season. The Tigers had begun to rebuild in earnest in the second half of the season, trading away OFs J.D. Martinez and Justin Upton and P Justin Verlander, and Kinsler was next to go, being traded to the Los Angeles Angels on December 13th in return for two prospects, P Wilkel Hernandez and OF Troy Montgomery.

Kinsler didn't last a whole year in Anaheim. With the Angels' season going poorly in 2018, he was traded to the Boston Red Sox on July 30th for minor league pitchers Williams Jerez and Ty Buttrey. He was hitting .239 with 13 homers in 91 games after a very poor start that had him down to .179 on May 28th. The Red Sox were looking for some insurance at second base, with Dustin Pedroia unlikely to play again that season. He hit .242 with just 1 homer in 37 games for Boston but continued playing some solid defence at second base, leading to his winning his second Gold Glove at the end of the season. He did see significant playing time in the postseason, with 11 games and 34 at-bats as Boston won a World Series title. He had 7 hits, including 3 doubles, scored 4 runs and drove in 3. He became a free agent after the season and on December 20t signed a two-year contract with the San Diego Padres worth 8 million. It was a relatively low salary, a reflection of widespread concern that he had lost significant bat speed and may not longer be able to hit enough to justify a starting job in the majors, even if his defensive play was still outstanding. The Padres were mainly interested in a veteran presence to patch them over until some of their better prospects were ready to step in. He played 87 games, hitting .217 with 9 homers and 22 RBIs. On August 16th, he was placed on the injured list with a herniated disk in his back, ending his season - and possibly his career given his advancing age and declining production. Indeed, that December, Kinsler announced his retirement. He was offered a position in the Padres' baseball operations department. He finished exactly one hit short of 2,000, joining Hall of Famer Jimmy Collins as the only players to hold that distinction. The final hit of his career was a homer off Andrew Kittredge of the Tampa Bay Rays on August 12th; interestingly, that homer was recorded as a pitcher, as he was making the first and only presence on the mound of his career, pitching a scoreless 9th inning in a 10-4 blowout loss.

He wasn't quite done with baseball, however, as in March 2021 he announced that he would play for the Israeli national team at the 2020 Olympics (delayed by a year by the Coronavirus pandemic); he had earlier played for Team USA in the 2017 World Baseball Classic, hitting homer in the 8-0 win over Puerto Rico that clinched the Gold Medal. He acquired Israeli citizenship to become eligible to represent the country. This was possible because he has Jewish ancestry on his father's side, with both of his grandparents having emigrated from Europe in the 1930s to escape growing antisemitism. His grandfather went by the name "Kunstlich" at the time, but changed it upon arriving in the U.S. He visited Israel just before the pandemic broke, in January 2020, thus making aliyah, an essential step towards obtaining citizenship. He also underwent spine fusion surgery, alleviating his long-standing back pain and allowing him to train again.

Kinsler is listed as #18 on the all-time list of second baseman by the JAWS method - there are 20 Hall of Fame second basemen, so clearly Ian ranks higher than several of them. In an announcement of his retirement, one reporter said he had "borderline Hall of Fame credentials", but also said that it was unlikely he would get in [1]. Nevertheless, by JAWS/WAR he ranks higher than Hall of Fame luminaries such as Billy Herman, Bobby Doerr, Nellie Fox and Red Schoendienst.