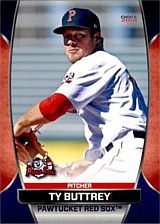 Pitcher Ty Buttrey was one of two prospects sent by the Boston Red Sox to the Los Angeles Angels in return for second baseman Ian Kinsler at the trading deadline in 2018; the other was P Williams Jerez. Ty made his major league debut with the Angels two weeks later. He took brief spins in the closer's chair over the next two seasons, making 88 appearances and logging 6 saves while fanning 104 batters in 88 2/3 innings.