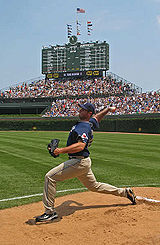 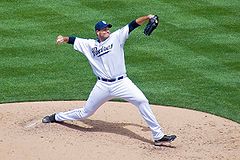 Chris Young is a pitcher and one of the tallest players in baseball. Not surprisingly, he was a basketball player in college, and in fact was offered a contract from the Sacramento Kings of the NBA as he graduated from Princeton University. He is not to be confused with his contemporary, outfielder Chris Young.

Young was drafted by the Pittsburgh Pirates in the 3rd round of the 2000 amateur draft. He was signed by scout Dana Brown and made his pro debut the next summer. He was traded a couple of times before reaching the majors. The Pirates sent him to the Montreal Expos after the 2002 season, in return for veteran relief pitcher Matt Herges, whom the Expos were about to release to make room on their major league roster. Young had an excellent year in the Expos' system in 2003, but at the end of spring training in 2004, he was sent to the Texas Rangers along with Josh McKinley for catcher Einar Diaz and a minor league pitcher, Justin Echols. Diaz barely played as Brian Schneider's back-up in Montreal, while Young was a fixture in the Rangers' starting rotation by the end of August of that year. He made his debut with Texas on August 24th, going 3-2, 4.71 in 7 starts.

Young established himself as a solid starter by going 12-7, 4.26 in 31 starts for the Rangers in 2005, his first full season in the majors. However, after the season, he was included in a disastrous trade for the Rangers, in which they sent Young, 1B Adrian Gonzalez and OF Terrmel Sledge to the San Diego Padres in return for pitchers Adam Eaton and Akinori Otsuka. Both pitchers acquired by Texas were huge busts, while Young and Gonzalez became stars in the National League. It was the third time Young had been included in a major trade already, and all of the deals turned out badly for the team who sent him away.

Chris Young emerged as one of the National League's top starters with the San Diego Padres, going 11-5, 3.46 in 2006 and beating the eventual World Champions St. Louis Cardinals in his only start in the NLDS. On September 22nd that year, he took a no-hitter into the 9th inning in a start against the Pirates before walking Jose Bautista with one out and then allowing a pinch homer to Joe Randa. As a result, he is one of the Padres pitchers to come closest to pitching a no-hitter. He did even better in 2007, posting a 3.12 ERA, the 5th best in the league. He was elected by fans as the final man on the National League squad for the 2007 All-Star Game, but was the losing pitcher in the contest. He was only 9-8 overall, a victim of poor offensive support. In 2008, bothered by health issues, he was limited to 18 starts, but pitched well when he did play, going 7-6, 3.96. 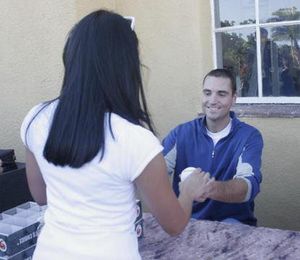 Young autographs a ball for a fan

Young has a particularly slow delivery to the plate, which makes him vulnerable to the stolen base. On April 27, 2009, he gave up 8 stolen bases in a game against the Colorado Rockies, including five by rookie Dexter Fowler. He missed the second half of the 2009 season with shoulder surgery, but was back in the Padres' rotation at the start of the 2010 season. However, he was shut down again with shoulder trouble after making four strong starts, during which he went 2-0, 0.90.

Young signed as a free agent with the New York Mets before the 2011 season and made the starting rotation out of spring training. In his first start on April 5th, he became the first pitcher in Mets history to collect two hits in an inning. He led off the third with a single, came around to score the game's first run, then hit an RBI single when the line-up turned around. His second single chased starter Cole Hamels, and he then added a third single in the 5th inning; he was credited with the 7-1 win. As had been the case the previous season, he went straight back to the disabled list, being sidelined on April 16th because of biceps tendinitis in his pitching arm, but this time he was able to return to action quickly. Alas, that too was short-lived; on May 8th, he underwent an MRI on his shoulder and was placed once again on the DL. He had not made his scheduled May 7th start, giving up his spot to Dillon Gee. He was 1-0, 1.88, in 4 starts at that point. The results of the MRI were discouraging: Mets physician Dr. David Altchek diagnosed a re-tear of the anterior capsule in his right shoulder, the same injury that had sidelined Johan Santana. Young faced a choice between surgery and rehabilitation, with no guarantee that either course would allow him to return to a major league mound.

Young opted for surgery, and after missing the remainder of 2011 and the start of the 2012 season, began yet another comeback attempt with the St. Lucie Mets of the Florida State League. After 3 solid starts there, and another solid outing for the AAA Buffalo Bisons, he was back with the Mets on June 5th, giving up 3 runs in 5 innings in a no-decision against the Washington Nationals, regaining his place in the team's starting rotation from that point forward. He made 20 starts for the Mets the rest of the way, going 4-9 with a 4.15 ERA. His 115 innings were the most for him in the majors since 2007, and he struck out 80 while walking 36. Just like it looked as if he was fully healthy for the first time in years, however, he was limited to 9 appearances, all in the minor leagues, after signing with the Washington Nationals for 2013. He was 1-2 with a 7.88 ERA in 7 starts for the AAA Syracuse Chiefs early in the year, then he underwent surgery for thoracic outlet syndrome, a condition which is believed to have led to the shoulder problems of previous years. After the surgery, he was only able to make a couple of late-season rehab appearances in the low minors. He was back with the Nationals at the beginning of spring training in 2014 but was released on March 25th. The Seattle Mariners picked him up immediately, however. He was scheduled to make his first start in over a year on April 5th at the O.co Coliseum, but the game was postponed because of a water-logged field. Instead, he was used in relief the next day, pitching a couple of scoreless innings after starter Erasmo Ramirez had given up 5 runs in 4 innings; it was the first relief appearance of Young's career, after 159 starts. The Mariners then announced that he would be used in long relief for a spell, but quickly changed their minds as he was back starting a week later without having been used out of the bullpen. He recorded his first win in 20 months on April 29th when he defeated the New York Yankees, 6-3, allowing 2 runs in 5 1/3 innings. That was the start of an outstanding comeback season in which he went 12-9, 3.65, in 29 starts, pitching 165 innings and striking out 108. He was named the American League Comeback Player of the Year after the season.

He joined the Kansas City Royals for the 2015 season, quickly showing his value as a swingman, alternating between appearances in long relief and spot starts while keeping a very low ERA. On June 16th, it was with his bat that garnered attention, as he became the first Royals pitcher since 1972 to drive in 3 runs in a game in a 7-2 win over the Milwaukee Brewers; he also pitched 7 innings to improve to 6-2 on the year. On September 28th, a day after his father died, he pitched 5 no-hit innings against the Cleveland Indians in his first start in two months. The Royals won, 3-0, and he improved to 11-6 on the year. That is the record he finished with, along with an ERA of 3.06 in 34 games (18 starts). He made 4 appearances in the postseason, including a start each in the ALCS and World Series, as the Royals won their first championship in 30 years. He won Game 1 of the Series against the New York Mets on October 27th by pitching three hitless innings in relief, from the 12th to the 14th inning, and getting the win when the Royals scored an unearned run off a fellow veteran started being used in relief, Bartolo Colon, in the bottom of the 14th, for a 5-4 win. He then started Game 4 and gave up 2 runs in 4 innings but did not figure in the decision as the Royal;s won the game, 5-3.

Young struggled in 2016, going 3-9, 6.19 in 34 games again as a swingman. He made 13 starts and pitched 88 2/3 innings, and also recorded a save, the first of his career. In 2-17, he made just 2 starts in 14 appearances, had no decisions and a 7.50 ERA in 30 innings. He was released on June 24th. He seemed to have reached the end of the line, but in 2018 he went to spring training with the San Diego Padres in the hope of extending his career a little longer. In a bizarre twist, he was still the last Padres pitcher to have won a postseason game when he showed up in spring training that year, his 2006 win in the Division Series not having been repeated by anyone since.

In May 2018, after his retirement as a player, he was hired by Major League Baseball to serve as Vice-President for On-Field Operations, Initiatives and Strategy. His responsibilities touch on issues such as pace of play, negotiations with umpires, minor league baseball and official scoring reviews. On December 4, 2020, he was hired by the Texas Rangers to be their General manager with the title of Executive Vice-President, working under Jon Daniels who relinquished the title to concentrate on his duties as President of baseball operations. This followed the trend of separating the roles of GM and of President of baseball operations, and also of putting an Ivy League graduate in the GM position. Of course, Young had them added rare qualification of also having been a successful player in addition to his educational credentials. On August 17, 2022, he took over as Head of Baseball Operations in place of Daniels, after daniels was relieved of his duties by owner Ray Davis.