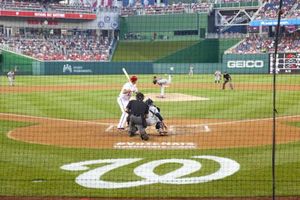 The 2014 Washington Nationals set a record by recording 31 strikeouts in their first two games of the year. Their pitchers struck out 18 batters in defeating the New York Mets, 9-7, in 10 innings on Opening Day, March 31st, then added another 13 in winning their second game, 5-1, over the same Mets on April 2nd. The previous record had been set by the Texas Rangers against the Houston Astros a year earlier. In the second game, Gio Gonzalez started and won the game and hit a home run, making it the second straight year he had done so in his first start of the season. They completed the road sweep on April 3rd with a 8-2 win over the Mets; on that day, scheduled starter Jordan Zimmermann woke up feeling ill and had to give way to young Tanner Roark, who pitched well after a difficult 1st inning. 3B Ryan Zimmerman had a four-hit game as the Nats thoroughly outplayed their opponents over the three games.

After a strong start that saw the Nats win 7 of their first 10 games, the team went into a rut, staying barely above .500 before another surge in early May brought them back into first place on May 5th. However, that was short lived, and the Nats were 2 games below .500 on May 28th and in third place behind the Atlanta Braves and a surprising Miami Marlins team. However, they played much better starting in June and on July 9th, they returned to 1st place and would stay there for a long time, apart for a one-day blip on July 19th when they fell to second behind the Braves. They took advantage of the Braves' poor play in early August to build their lead and started to put some significant distance between their pursuers and themselves with an eight-game winning streak starting on August 12th. Their goal was now to repeat the feat of the 2012 edition of the team, which had finished with the National League's best record that year. When they won their next two games to extend the streak to 10 wins, it matched the longest in franchise history, accomplished three times when they were the Montréal Expos and twice as the Nationals. It was actually their second ten-game winning streak of the year, the first one having lasted from June 12-21. In the latest streak, five of their last 6 wins were in walk-off fashion, something not seen since the 1986 Houston Astros.

Nursing a comfortable lead over the second-place Braves, the Nationals clinched the NL East title for the second time in three years on September 16th, when they shut out the Braves, 3-0, behind the pitching of Tanner Roark, who recorded his 14th win, having proved to be an excellent addition to the starting rotation after his unexpected initial start.