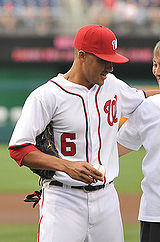 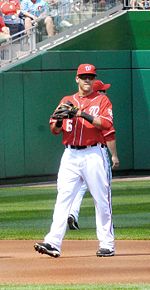 Ian Desmond was signed by the Montreal Expos and scout Russ Bove as a 3rd round pick in the 2004 amateur draft.

Desmond had a major league debut for the ages playing for the Washington Nationals against the Philadelphia Phillies on September 10, 2009. He went 2 for 4, hitting his first major league home run and adding a double and 4 RBI to lead his team to an 8-7 win over the defending World Champions. For good measure, he was 4 for 4 with two more doubles against Florida in his next game two days later, giving him a batting average of .750 and a slugging percentage of 1.500 after two games in the big leagues. He finished his first major league stint with a .280/.318/.561 batting line, 7 doubles and 4 homers for a 128 OPS+

Desmond had an excellent first half as the Nationals' starting shortstop in 2012, hitting .285 with 24 doubles and 17 homers, scoring 56 runs and driving in 51. On June 5, he had a game to remember, driving in the tying run in the 8th, 10th and 12th in a win over the Mets;l it had been 46 years since the last player (Art Shamsky) to have 3 game-tying or go-ahead RBI after the 8th inning in a contest. He was less publicized than teammates Stephen Strasburg and Bryce Harper, but just as big a reason for the team standing in first place at the season's mid-point. He was named to the All-Star team for the first time as a result (he did not play in the contest, a 8-0 NL win), but suffered a lingering oblique injury around that time, that he tried to play through. After he missed a few games as his condition failed to improve, the Nationals elected to place him on the disabled list on July 22nd. he missed a month of action, then returned to finish the year with a batting line of .292/.335/.511, with 33 doubles, 25 homers and 73 RBIs. He was named the winner of the NL's Silver Slugger Award as its best-hitting shortstop. In the postseason, he went 7 for 19 (.368) with a double, but the Nats were upset by the St. Louis Cardinals in the NLDS in what was the team's first postseason appearance since moving to Washington.

In 2013, Desmond repeated as winner of the Silver Slugger Award, as he hit .280 with 20 homers and 80 RBIs in 158 games. He also set personal bests with 338 doubles and 77 runs scored that season. The following season, the Nats won another division title and Desmond hit a solo homer off Henderson Alvarez in the 2nd inning of the final game of the Nationals' season on September 28, 2014, providing Jordan Zimmermann with his margin of victory in a 1-0 no hitter over the Miami Marlins. He made it a third straight year as the Silver Slugger Award winner, batting .255 with 24 homers and a career-high 91 RBIs. However, like most of his teammates, he slumped in the postseason, as the Nationals were defeated by the San Francisco Giants in the NLDS. He went 3 for 18 in the series, all the hits being singles, and did not drive in a run as his team made a second early exit from the playoffs in three years.

He started the 2015 season in a defensive slump, as he committed 6 errors in his team's first nine games, many of them quite costly. This was particularly noticeable as the Nats were preseason favorites to run away with the NL East title, but stumbled to a 3-6 record over that span, while committing a major league-leading 16 errors. The entire season was nightmarish for Ian as he hit a career-low .233 in 156 games, and that was after a bit of a second half surge, as he was hitting only .215 at the end of July. He did continue to display good power, with 27 doubles and 19 homers, scoring 63 runs and driving in 62. His OPS+ was 80 after three seasons above 100, and the Nats missed the postseason in spite of having been everyone's favorites to win a division title.

He became a free agent after the 2015 season and turned down a qualifying offer of $15.8 million in order to test the market. In 2014, he had turned down a seven-year deal with $107 million, so in his mind at least, he was worth even more. However, he found out that there was little demand for his services, and on February 28, 2016, he had to resign himself to signing a one-year deal with the Texas Rangers for $8 million, a far cry from what he was looking for. He was moving to a team that was set in the middle infield with Elvis Andrus at shortstop and Rougned Odor at second, with Jurickson Profar also in the wings as he wanted to come back from missing two seasons because of a shoulder injury. However, GM Jon Daniels explained that this was not a problem, as the Rangers had signed Desmond to be their regular left fielder, and not just a temporary replacement for ailing Josh Hamilton. In the end, he was the Rangers' regular centerfielder and did very well, even making the Al-Star team for the second time. In 156 games, he hit .285, scored 107 runs as Texas's leadoff hitter, slugged 29 doubles and 22 homers and drove in 86 runs. He was a major reason the Rangers repeated as AL West champions. In the postseason, he went 3 for 14 with a double as Texas fell to the Toronto Blue Jays in three games in the Division Series. 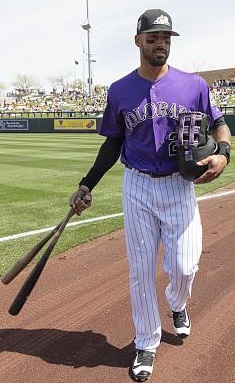 Desmond became a free agent again after the 2016 season, and this time there were a number of suitors. On December 8th, he signed a five-year contract with the Colorado Rockies worth $70 million. It was less than the deal he had turned down two years earlier, but it was nothing to scoff at either. With Colorado set in the outfield and middle infield, he was looked at as the team's first baseman in 2017. However, in a Cactus League game on March 12th, he broke his left hand when hit by a fastball thrown by Rookie Davis of the Cincinnati Reds. He had to undergo surgery and was likely to be out for an extended period. He returned to the fold on April 30th and dd not take long to get going, as in his third game back on May 3rd, he went 3 for 5 and hit a pair of homers to lead the Rockies to an 11-3 win over the San Diego Padres. The idea of having him play first base did not last long though, as Mark Reynolds had played very well in his absence, and the Rockies decided instead to use him in left field. He was hitting .284 in 55 games at the end of June when he had to return to disabled list on July 3rd; fortunately, that was a short stay, lasting only a couple of weeks around the All-Star break. He played 95 games in all that season, hitting .274 with 7 homers and 40 RBIs, with most of his playing time coming in left field. he did not start the Wild Card Game against the Arizona Diamondbacks on October 4th, instead coming into the game in the 6th inning as part of a double switch when Pat Neshek replaced 1B Reynolds and he took P Chris Rusin's spot in the batting order. He went to bat twice, striking out with a man on base against Robbie Ray in the top of the 7th, then leading off the top of the 9th with a single off Fernando Rodney. The Rockies were trailing, 11-7, by that point, and while he did come in to score on a single by Carlos Gonzalez with two outs, it had little bearing on the final outcome as the Rockies were eliminated.

Coming into spring training in 2018, with Gonzalez having left via free agency, Desmond was looking to compete for an outfield spot, although Reynolds was also not re-signed, meaning that there was a potential opening there if prize prospect Ryan McMahon proved not to be ready for a full-time job. However, he ended up playing mainly first base as he got into 160 games, hitting .230 with 22 homers, 80 runs and 88 RBIs. It was a slightly better season than his first one with the Rockies - his OPS+ was 83 as opposed to 72 the year before. His production was typical of a team that was uncharacteristically weak with the bat, but dominating on the mound, and also came closer to winning a division title than any previous edition of the team had ever done, losing out in a one-game playoff against the Los Angeles Dodgers. They did win the Wild Card Game against the Chicago Cubs - Desmond went 1 for 5 - but were swept by the Milwaukee Brewers in the Division Series. His bat was cold in that latter series, as he went just 1 for 12, his lone hit being a single, and he neither scored nor drove in a run.

Heading into 2019, the Rockies decided to make some changes to their line-up, moving CF Charlie Blackmon to RF, and having Desmond play CF. First base was left to be shared between Mark Reynolds, back in the fold after a year away, and Ryan McMahon, who had yet to establish himself as a major league regular. If the move succeeded, it would make him one of the oldest centerfielders in the majors at 33, and playing in one of the ballparks with the largest outfield areas to cover. On June 10th, he showed some thunder with his bat as he blasted a homer measured at 486 feet into the concourse at Coors Field, off Mike Montgomery of the Cubs; it was the longest home run hit by anyone up to that point of the season. He ended the year at .255 with 20 homers and 55 RBIs in 140 games, playing 74 games in center and 44 in left. He also made the first pitching appearance of his career in a mop-up role, with a scoreless inning in a 16-8 loss to the San Diego Padres on September 2nd. The Rockies sank back in the standings and missed the postseason, while his OPS+ remained below average at 88. Still, he was set to return in 2020, but on June 29th, as players were about to report to training camp to prepare for the abbreviated season, he announced that he would sit it out over health and safety concerns. He also asked MLB to take this opportunity to reflect on the lack of representation by African-Americans at all levels of the game, from front offices to youth baseball, in the wake of widespread demonstrations around the country following the tragic death of George Floyd killed by a police officer in Minneapolis, MN while baseball was shut down by the coronavirus pandemic. As spring training opened in 2021, he made it known via a social media post that he still wasn't planning onplaying this season "for now", making it increasingly unlikely that he would return at all, given his age.

Desmond was the Washington Nationals' all-time leader for stolen bases with 122, until surpassed by Trea Turner in 2018. His great aunt is Viola Desmond, who is often called the Canadian Rosa Parks because of her role as a civil rights pioneer in Halifax, NS, and who is pictured on the Canadian ten-dollar bill.