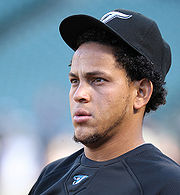 Henderson Álvarez made his major league debut when he was 21 years old. He was an All-Star at 24, but arm maladies stalled his career shortly thereafter.

Álvarez began 2010 5-3 with a 3.19 ERA for the Dunedin Blue Jays and was picked for the 2010 Futures Game. He did not fare well in that contest. Entering in the bottom of the 5th with a 2-1 deficit, he relieved Julio Teheran with the game still within reach. He began by allowing a Dee Gordon single, then got Mike Moustakas to ground into a double play. Alex Liddi made an error to put Mike Trout aboard, then Álvarez served up a single to Eric Hosmer. Hank Conger promptly took him deep for a 3-run blast. Álvarez recovered to get pinch hitter Ben Revere on a grounder. He would be relieved the next frame by Stolmy Pimentel. For the summer, he finished 8-7 with a 4.33 ERA. Baseball America rated him having the best changeup in the Florida State League and the loop's #12 prospect, between Adeiny Hechavarria and Adam Warren.

In 2011, Álvarez started the year with the AA New Hampshire Fisher Cats, where he went 8-4, 2.86 in 88 innings to earn a promotion to AAA Las Vegas in early August, impressing enough in his first start at the higher level to earn a call-up to Toronto the following week. He made his debut August 10th, facing the Oakland Athletics at the Rogers Centre. At 21, he was the third youngest starting pitcher in Blue Jays history, after 20-year-olds Jeff Byrd and Phil Huffman back in the 1970s. He impressed with a fastball in the mid-90s, but gave up three runs in the 4th inning, including a solo home run by David DeJesus. He left with two outs in the 6th, one batter too early to benefit from a 5-run outburst by his Blue Jay teammates, highlighted by Brett Lawrie's first career grand slam. Reliever Casey Janssen got credit for the 8-4 win. After two losses, Álvarez earned his first major league win on August 31st against the Baltimore Orioles; he gave up no runs in 8 innings as the Jays pounded the Orioles for a 13-0 win. He finished the year with a record of 1-3, 3.53, in 10 starts with an outstanding K/BB ratio of 40/8.

In 2012, Álvarez made the Blue Jays' starting rotation out of spring training. On May 4th, he threw his first career shutout, defeating the Los Angeles Angels of Anaheim, 4-0 on 5 hits. He was the only member of the team's Opening Day rotation not to struggle with injuries or inconsistency during the year, logging 31 starts with a record of 9-14, 4.85. While the record and ERA were only so-so, the Jays were pleased with his ability not to miss a turn and his 187 1/3 innings pitched. With only 79 strikeouts - a mere 3.8 per 9 innings - there was serious doubt about his ability to remain a major league starter over the longer term, even if he still had some room to improve at only 22. In the end the Jays deemed him expendable, as they included him in a package of players they sent to the Miami Marlins on November 13th in return for a haul of higher-priced veterans. Accompanying Álvarez to Miami were infielders Yunel Escobar and Adeiny Hechavarria, catcher Jeff Mathis as well as three minor league prospects, while the Jays received shortstop Jose Reyes, pitchers Mark Buehrle and Josh Johnson, catcher John Buck and utility man Emilio Bonifacio in the blockbuster deal.

Álvarez did well during his first spring training with the Marlins in 2013 and won the spot as the team's third starter when he was placed on the disabled list with shoulder problems on the eve of Opening Day. The injury kept him out until early July, and he had to wait until July 26th to record his first win as a Marlin. That day, he defeated the Pittsburgh Pirates, 2-0, by pitching six scoreless innings during which he gave up only two hits; four relievers then combined to complete the shutout. On September 2nd, he had another memorable game, facing the Chicago Cubs at Wrigley Field. After falling behind 3-1 in the 1st, he hit a three-run homer off Travis Wood in the 2nd to put the Marlins ahead, his first career long ball, then did not allow another run while pitching until the end of the 6th. He warmed up to start the 7th, but had to leave with a pulled hamstring and three relievers combined to complete the 4-3 win. He finished the year with a masterful performance on September 29th, the season's last day. Facing the Detroit Tigers, he pitched 9 no-hit innings at home, but his teammates were unable to get any runs of their own against Justin Verlander. They finally broke through in the bottom of the 9th against Luke Putkonen, when Giancarlo Stanton scored on a wild pitch to make Álvarez's no-hitter official. Álvarez was standing in the on-deck circle at the time and would have batted and continued to pitch had the Marlins failed to score a run for him. It was only the 6th time a no-hitter had ended in walk-off fashion, having last happened in 1997 when Francisco Cordova and Ricardo Rincon needed 10 innings of no-hit work before winning on a three-run homer by Mark Smith; to find a single pitcher winning a no-hitter in similar fashion, one had to go all the way back to Virgil Trucks needing a solo homer by Vic Wertz in the bottom of the 9th to win his no-hitter on May 15, 1952. With the no-hitter, Álvarez finished the year 5-6, 3.59 in 17 starts.

Henderson came close to repeating his season-closing gem of the previous year on April 19, 2014, when he threw a complete game two-hit shutout in a 7-0 win over the Seattle Mariners. After one out in the 9th, he had only faced the minimum 25 batters but Mike Zunino hit a one-out double and was eventually stranded; the only other hit had been a lead-off double by Dustin Ackley in the 5th, but he had been wiped out when Zunino grounded into a double play. He recorded another shutout on May 6th when he blanked the New York Mets, 3-0, on 6 hits. He made that three shutouts on June 3rd when he pulled the trick against the Tampa Bay Rays needing only 88 pitches to complete the gem, extending his scoreless innings streak to 21 in the process. The shutouts represented all three of his wins at that point, as his record stood 3-3, 2.62 in 12 starts. On the final day of the season, September 28th, the tables were turned, as it was his turn to be the victim of a final day no-hitter. He pitched very well that day, only giving up a 2nd-inning solo homer to Ian Desmond in 7 innings, but Jordan Zimmermann held Miami hitless to emerge a 1-0 winner. Still, Álvarez ended up with an excellent record of 12-7, 2.65 in 30 starts, pitching 187 innings with a very good K/BB ratio of 111/33. With young Jose Fernandez missing most of the season to injury, he had successfully stepped up at the Marlins' ace as the team was surprisingly competitive all season.

Things did not go well at for Henderson in 2015. He made only 4 starts for Miami, losing all 4 with an ERA of 6.45, made two stints on the disabled list because of a shoulder injury, and finally was operated on July 28th, definitively ending his season. In the fall, the Marlins declined to offer him a contract for 2016, making him a free agent. On December 28th, he signed a one-year deal with the Oakland Athletics and was immediately added to the major league roster. He only pitched 11 times in 2016, all of them in the minors, combining for a record of 1-1, 4.09 and logging just 33 innings. He became a free agent again after the season, but did not find a team immediately, as he was still recovering, and he pitched for the independent Long Island Ducks in the meantime, going 2-1, 3.09 in 7 starts. The Philadelphia Phillies signed him on August 22, 2017, just in time for him to make 3 starts in Triple A for the Lehigh Valley IronPigs, for whom he went 2-0, 2.84. He showed enough to make his return to the majors on September 17th, but he gave up 4 runs in 5 innings to be charged with a 6-3 loss the Athletics. He made two more appearances before becoming a free agent.

He was 6-1 with a 2.62 ERA for the Tigres de Quintana Roo of the Mexican League in the spring 2018 season, tying for 5th in wins. He fell to 3-4, 4.60 in the fall season. He spent part of 2019 in the Washington Nationals organization, going 1-4 with a 5.94 ERA in 24 games (mostly out of the bullpen) for the Fresno Grizzlies. He then returned to Quintana Roo and was 4-2 with a 3.12 ERA in six starts. After the season, he pitched for Venezuela in the 2019 Premier 12. He started against pool host Taiwan and pitched 3 1/3 shutout innings despite three hits and three walks. Liarvis Breto took over with the game scoreless as Yi Chang was dazzling for Taiwan. Three of the first four batters had reached before he got Chun-Hsiu Chen to hit into a double play.