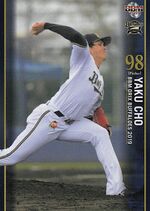 Yi Chang has pitched in Nippon Pro Baseball and for the Japanese national team. He is a cousin of Dai-Kang Yoh, Yao-Hsun Yang and Chih-Yuan Chen. [1] His parents were both track-and-field athletes. [2]

Like his cousins Yoh and Yang, he went to school in Japan to try to further his pro prospects there. [3] He was signed by the Orix Buffaloes as a developmental squad player. In 2017, the outfielder struggled (6 for 66, 2B, 10 BB) in the minor Western League. The next year, he was 0 for 7 at the plate and transitioned to the mound (1 R in 5 IP).

In 2019, he was 2-3 with a 2.40 ERA in the WL and got his first look with the big club. In his debut, he got the win over the Nippon Ham Fighters, allowing only two hits and one run in six. He was the first developmental squad signee to make his NPB debut as a starting pitcher and wind up with the win. [4] He threw a fastball timed at 94.4 mph and complimented it with a slider, changeup and curveball. [5]

He made Taiwan's team for the 2019 Premier 12. In his debut, he faced off against former major league All-Star Henderson Alvarez and Venezuela; he matched the former big league star, allowing no runs in seven (four hits) in a win. Another former major leaguer, Miguel Socolovich, took the loss as Alvarez left earlier. Kuan-Yu Chen relieved Chang and Kai-Wei Lin and Hung-Wen Chen concluded the shutout. That locked up a spot in the second round while eliminating Venezuela from that round. He also pitched shutout ball (6 2/3 IP, 4 H, 4 BB, 4 K) in his second game, against South Korea, before Kuan-Yu Chen and Hung-Wen Chen wrapped up a shutout win to hand the defending champs their first loss of the tournament; Kwang-hyun Kim took the defeat. Chang tied Hiroshi Kaino, Yudai Ono, Rei Takahashi and Hyeon-jong Yang for the tourney lead in wins and led in ERA (the next 0.00 was Chih-Wei Hu with 1 UER in 8 2/3 IP and the next hurler with a 0.00 RA were Philippe Aumont and Arturo Reyes with 0 UER in 8 IP). He was named the tourney's All-Star starting pitcher, beating out numerous former major leaguers, NPB stars and prospects. [6]