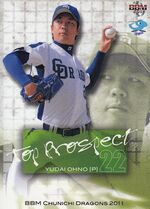 Yudai Ono has been a two-time All-Star in Nippon Pro Baseball and has won a Sawamura Award (through 2020).

He made the CL team for the 2014 NPB All-Star Games. Appearing in Game 1, he relieved Kenta Maeda in the 4th with a 3-0 lead over the Pacific League. He struck out Takeya Nakamura and got Dae-ho Lee on a fly but then ran into trouble. Yuya Hasegawa and Kazuya Fujita both singled and Motohiro Shima drew a walk to load the bases. Ono escaped the jam by retiring Kenta Imamiya; it was the closest the PL got to a run that day. Dai-Kang Yang opened the 5th with a double then Ono clamped down to retire Ginji Akaminai (K), Yoshio Itoi and Nakamura. Shoichi Ino relieved in the 6th and continued the shutout in what would be a 7-0 win. [3] Ono was 10-8 with a 2.89 ERA in 2014, finishing 4th in the CL in ERA (between Maeda and Toshiya Sugiuchi. [4] He also tied Yasutomo Kubo for 7th in the league in strikeouts (119) and tied for 8th in wins.

An All-Star again, he relieved Kenjiro Tanaka in the 6th inning of 2015 NPB All-Star Game 2, with a 7-1 lead. Sho Nakata greeted him with a single, Nobuhiro Matsuda flew out but Tomoya Mori became the youngest player (19) to hit a pinch-hit homer in a NPB All-Star Game to make it 7-3. Ono retired Ikuhiro Kiyota and Imamiya to end the inning. In the 7th, he struck out Shima, got Katsuya Kakunaka on a grounder and got Hideto Asamura looking. Tony Barnette took over in the 8th and the CL held on to win. [5] He finished 6th in the CL in ERA, between Fujinami and Hiroki Kuroda. [6] He tied for 6th in wins, tied Tomoyuki Sugano for 2nd with 6 complete games, tied Miles Mikolas for third in shutouts (2), led in IP (207 1/3, 1 ahead of Maeda), was 4th with 154 strikeouts (between Maeda and Kris Johnson) and was 3rd with a 1.04 WHIP (after Mikolas and Maeda).

He made the Japanese national team for the 2015 Premier 12. He pitched twice for the team. Against Mexico, he relieved Yuki Nishi in the 7th with a 5-3 lead. Alfredo Lopez, Kevin Medrano and Juan Perez all singled, the latter two on bunts. Jose Torres hit into a double play to make it 5-4 then Kazuhisa Makita took over. Japan would prevail, 6-5. He was much better against Venezuela. Relieving Nishi in the 5th with a 3-2 deficit, he faced the minimum over the next three innings, fanning three and allowing one hit. Makita took over and Japan would rally for a 6-5 win. [7]

In the 2019 Premier 12, he helped Japan win the title. In his debut, he relieved Imanaga in the 4th with a 4-0 lead against Taiwan. He fanned [Chih-Shieh Su]] but Che-Hsuan Lin and Po-Jung Wang singled. He recovered to K Sheng-Wei Wang and get Wei-Chen Wang on a fly. In the 5th, he had very similar results, opening with a strikeout (Li Lin) then giving up two singles (Chin-Lung Hu, Hung-Yu Lin) before getting the last two outs. Yu-Hsien Chu hit into a force then Su grounded out. Taisuke Yamaoka relieved him in the 6th. Ono got the win over Yi-Chung Liao. His next game came in Japan's only loss, to Team USA. He replaced Shinya Kayama in the 6th with a 31 deficit. He went 1-2-3, getting Brent Rooker on a fly then Taylor Gushue and C.J. Chatham both swinging. Japan got one in the bottom of the 6th. In the 7th, Ono struck out Mark Payton but Jo Adell hit a crucial insurance homer before Bobby Dalbec and Alec Bohm were retired. Yoshinobu Yamamoto relieved him in the 8th. Finally, he pitched against runner-up South Korea, replacing Takayuki Kishi in the 5th with a 7-6 lead. He walked Kun-woo Park, Jae-hwan Kim and Byung-ho Park but escaped the dangerous situation when Jeong Choi fanned and Baek-ho Kang flew into a double play, Kun-woo Park being out at home. Ono got his second win of the Premier 12. He tied Yi Chang, Hiroshi Kaino, Rei Takahashi and Hyeon-jong Yang for the win lead. [9]

The 2020 season was shortened by COVID-19 but Ono remained dominant, completing ten of twenty games and posting a 11-6, 1.82 record with a 0.87 WHIP and 148 K in 148 2/3 IP. He won another ERA title (.09 ahead of Masato Morishita), tied Nishi and Takumi Akiyama for second in wins), easily led in complete games (six ahead of Nishi), threw twice as many shutouts as anyone else (6, to Sugano's 3), led in IP (one more than Nishi) and led in whiffs (22 ahead of Sugano). He won the Sawamura Award as Japan's top hurler, beating out Sugano. [10] He was the first Dragon to win since Kenshin Kawakami 16 years prior. He was 3rd in voting for the 2020 Central League MVP, behind Sugano and Kazuma Okamoto. [11]