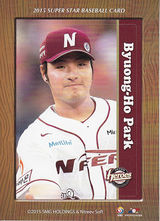 Byung-ho Park was the KBO MVP in 2012 and 2013 after struggling in his first four seasons as a pro.

On November 2, 2015, the Nexen Heroes placed his name on the Posting system, where he was hoping to follow in the path of Jung-ho Kang, who had had an excellent season with the Pittsburgh Pirates in 2015 after being posted by Nexen. The Minnesota Twins won bidding rights for him by offering $12.85 million, more than two and half times what the Pirates had bid for his former teammate Kang a year earlier. On December 1st, the two sides came to an agreement on a four-year contract worth $16 million, with an option for a fifth year. With Joe Mauer entrenched at first base for the Twins, Park was expected to be the DH, with slugger Miguel Sano moving to an outfield spot. On Opening Day, April 4th, he made his major league debut hitting 6th as the Twins' DH against the Baltimore Orioles. He struck out against Chris Tillman in his first at-bat, but hit a single off reliever Tyler Wilson the next time up. He was also hit by a pitch and scored a run as the Twins lost, 3-2. After three months, he was batting only .191 with 80 strikeouts in 62 games, although he had showed good power with 9 doubles and 12 homers. The Twins were struggling mightily, however, and on July 1st, he was sent down to the minor leagues when slugger Miguel Sano came off an extended stay on the disabled list. He played 31 games for Rochester, where he hit .224 with 10 homers and 19 RBIs and did not return to the majors. On February 3, 2017, the Twins decided to have him designated for assignment to make room on the roster for free agent signee Matt Belisle. As no team put in a claim for him, he was outrighted to Rochester on February 9th.