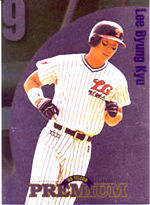 Byung-Kyu Lee was an outfielder with the Chunichi Dragons. He has appeared in the Olympics and World Baseball Classic and won a Korea Baseball Organization batting title during his 10 years as the center fielder for the LG Twins. He also won six Gold Gloves and led the league in hits several times.

Lee won Silver with South Korea in the 1994 Asian Games. He led the 1995 Asian Championship in average and stolen bases; he helped South Korea win Silver and a spot in the next year's Olympics. He starred in the 1995 Intercontinental Cup, hitting .333/.463/.606 with nine runs in nine games for Korea. He led the event with 7 steals (never caught), two more than Adonis Kemp. He also went deep three times to tie Evert-Jan 't Hoen, Nobuhiko Matsunaka, Norman Cardoze, Omar Linares, Hee-sung Mun, Jose Ramon Padilla and Yoshitomo Tani for second in the event in homers, one behind Juan Rodriguez.

Lee was MVP of the 1999 Asian Championship, when South Korea won Gold. He led the event in both batting average and runs.

After 2006, he was signed by the Chunichi Dragons, who had shown a mixed record with past KBO signees such as Dong-yeol Sun, Jong-beom Lee and Samson Lee. He hit just .261/.298/.360 in his first 203 AB for Chunichi, one of the lowest OPSes by a starter in the Central League. He was sent to ni-gun in June. With Kosuke Fukudome injured for the second half of the season, Lee returned to regular action. Overall, he batted .262/.295/.370 in 132 games. He was just 2 for 18 in the 2007 Japan Series but his hits were a 2-run homer and RBI double; he drove in two other runs for an impressive 2.5:1 ratio of RBI to hits on the Series as Chunichi claimed its first title in over 50 years.

Lee was 0 for 4 with two strikeouts in the 2007 Asian Championship.

This biographical article is missing the person's: birth place
Retrieved from "https://www.baseball-reference.com/bpv/index.php?title=Byung-kyu_Lee&oldid=1144726"
Categories: